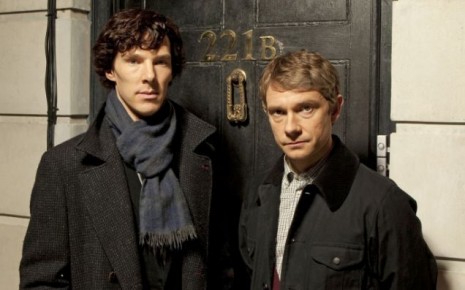 It’s been a great year for discovering new television shows, and I mainly have the Brits to thank for that. I discovered teenage superhero comedy, Misfits, which I found to be distastefully delightful. I’m working my way through six seasons of Doctor Who, which is really starting to grow on me. But finally, I’ve discovered yet another British show that is far and away the best new program I’ve seen out of any country in the last few years.

A modern day reboot of Sherlock Holmes sounds like a bit of a boring venture, as I hate procedurals with a passion. I can’t stand shows like CSI or Law and Order that have one mystery per forty minute episode, and everyone stands around looking at hair fibers until they can prove one of the four people they interviewed is guilty.

It’s beyond formulaic, and generally painfully dull. I was worried that perhaps the Brits were looking to us Americans for a change, and would set this new Sherlock to be clever detective that solved a mystery an hour and that would be that.

I should never underestimate British television.

Sherlock is instead what all mystery shows should be. They’ve created complex, head-scratching cases, many of which overlap and most that tie into a grand central plot pertaining to the entire series. The cast is full of lively characters, and Sherlock himself is the most loveable, strange savant since Rain Man.

In true British form, the seasons (series, as they say) are quite short, with only three a season. However, each episode is a full ninety minutes, without commercials, making each practically its own film. This allows the show to craft a much more complex mystery than one that would have to be solved in a mere 42 minutes on CSI, and the show benefits greatly because of the format.

The titular two roles of Sherlock and Watson are played by Benedict Cumberbatch (recently spotted in Tinker Tailor Soldier Spy) and Martin Freeman (of The Office and now Hobbit fame) where Freeman must play the straight man to Cumberbatch’s eccentric Holmes. Cumberbatch is one of the most interesting actors I’ve seen in quite some time as he’s got such unique facial features he almost looks extraterrestrial, but has a deep booming voice that sounds like Alan Rickman if you had your eyes closed. 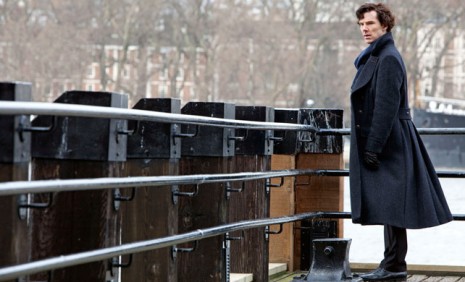 His brilliant portrayal of Holmes is why the series works. He’s a “consulting detective” that the police turn to when their crimes are too tough to solve. Unlike the recent Robert Downey Jr. variant however, who was so smooth he might as well have been a predecessor to James Bond, Cumberbatch’s Holmes is a self described “high functioning sociopath” who is completely clueless in social situations or practical knowledge (he never bothered to learn that the sun doesn’t revolve around the earth), but has a superhuman ability to find, process and analyze data. The segments where he understands an entire person or crime scene based on a the most subtle of clues are jaw-dropping, and it’s the best concept of an intelligent superhero of sorts I’ve ever seen.

Every superhero needs a villain, and classic Holmes nemesis Moriarty exists in this modern word as well. He’s as much of a genius as Holmes, if not more so, and seems to have a finger in every major case that crosses his desk. The constant battle between the two is what makes the show far more compelling than its procedural counterparts, and in the series two finale, their struggle made for the most intense episode to date.

With the equivalent of six movies in two season, it’s tough to make every episode as brilliant as the last, but Sherlock almost does it. The pilot got me addicted about twenty minutes into it, while the season two premiere is among my favorite episodes as it shows a human side to Sherlock by introducing Irene Addler. The finales of both seasons are pulse pounding, and will have you on your edge of your seat throughout. I didn’t care as much for the middle two episodes of each season, and particularly didn’t think the update for the Hound of Baskerville fit with the tone of the show, but even a bad episode of Sherlock is still pretty great.

I highly recommend finding this show however you can, and I predict many of you will be as addicted as I have been. Series two just ended this Sunday, and I’m on pins and needles waiting for the third to be announced.