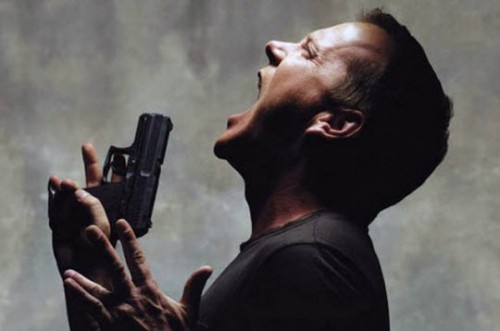 You can keep your forensic experts, CBS. Science & fibers & DNA, oh my! Me? Why, I’ve always been a fan of the more hard-boiled, dime-novel protagonists & antagonists, myself. I grew up on the prose of Mickey Spillane and Raymond Chandler. In the dark corners they created, a guy had to know how to use his fists at a young age. Plus, he had to know how to talk in order to just hold his place in society. In fact, give me a mook with an attitude and a gun, and I’m far more inclined to tune in from week-to-week if for no better reason just to see what he’s up to, who he’s after, and how he does ‘em in.

Yes, I know that makes me a bit of a critical cretin so far as some are concerned, but I like what I like, and I’ll never – NEVER – apologize for it. Mine is the world where John McClane would feel right at home killing the nastiest among us, where Conan would rush headfirst into combat with his blade already drawn, and where Dirty Harry would ask you if you felt lucky before he called you a ‘punk.’

Instead of apologizing, I’ll share a few of my TV favorites and encourage you to do the same in the chatbacks. 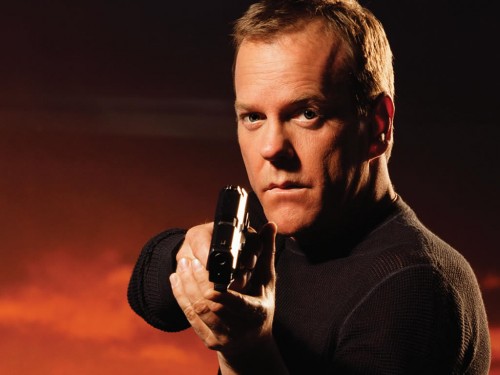 Kiefer Sutherland’s career was languishing in the doldrums when Joel Surnow, Robert Cochran, and Howard Gordon plucked the bad boy out of near obscurity and cast him as CTU Agent Jack Bauer. And for eight seasons I watched as the ultimate Alpha Male bested one terrorist after another, all the while making it mostly look pretty easy. Right now, I’m seeing all these TV ads for the upcoming flick Olympus Has Fallen, and I keep telling my wife, “Yeah, Jack Bauer did that in Season 7.” Chuck Norris wears Jack Bauer pajamas. True story.
Sure, you could make a big deal (plenty of critics and ‘fanboys’ did) out of Jack never stopping to have a Manwich or so much as take a pee in any 24-hour period, but waste was never Jack’s thing. 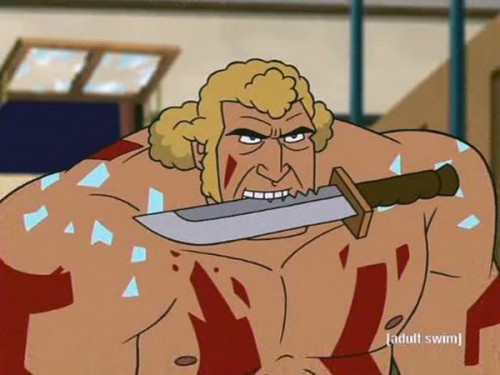 So much of any episode of The Venture Bros. is a delight (after Season 1, that is), but there’s no character I enjoy more than the indispensable Brock Sampson (voiced by the Patrick Warburton). He’ll fix those steely eyes on some dastardly villain and just as soon pluck the man’s spine from his chest cavity as he would say ‘hello.’ Brock’s vocal range has two settings – (1) his day-to-day drone about things inconsequential or (2) scream-from-the-bowels-of-Hell manic. I prefer his manic. No one else can show up utterly drenched in blood head-to-toe and still manage to get a laugh. No one.
If Venture ever ends, I’ll be first in line championing the idea of a Brock spin-off. 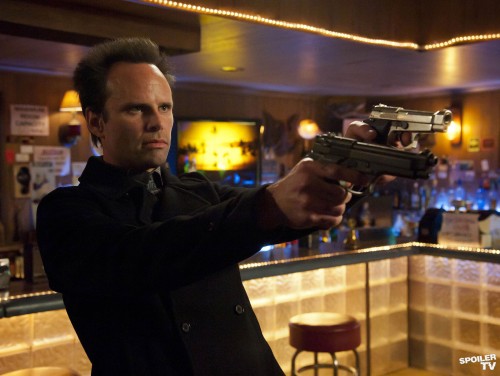 Actor Walton Goggins is ‘da man.’ After taking a brief hiatus from his stellar run as Detective Shane Vendrell on FX’s The Shield, he turned up as the legendary Boyd Crowder on Justified. (For those of you who don’t know, Elmore Leonard – Justified’s literary creator – killed off Crowder with only a single appearance in fiction; thank goodness he’s stuck around to a much longer life on TV.) Equal parts ‘mastermind’ and ‘hick,’ Boyd started out principally being the foil to U.S. Marshal Raylan Givens’ good guy; but he quickly grew wings and flew toward greater aspirations. With a knack for being as loquacious as he is deadly, he’s currently got his boot firmly on the neck of all things illicit in Harlan County.
Gannicus (Starz TV’s Spartacus) 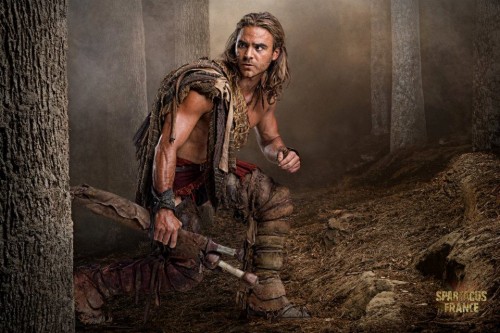 If you’ve never seen Spartacus, then you’ve no idea what you’re missing. Some have dismissed it as a contemporary spin on the whole ‘sandals and sex’ genre, and, while that’s a fair criticism, it’s grown into so much more. So much gets written about the legendary Spartacus, but, for my tastes, there’s perhaps no stronger Alpha Male in the bunch than Gannicus (played by Dustin Clare). He was borne out of the second season – the one that was essentially a flashback, giving showrunners time to work out the mechanics of continuing the program when they learned that central talent, Andy Whitfield, was diagnosed with non-Hodgkin’s lymphoma. Sadly, Whitfield passed.  Spartacus was recast with Liam McIntyre, but it was Gannicus’s perseverance that brought him back into the fold, standing with the other Gladiators against the advance of Rome.
Al Swearengen (HBO’s Deadwood) 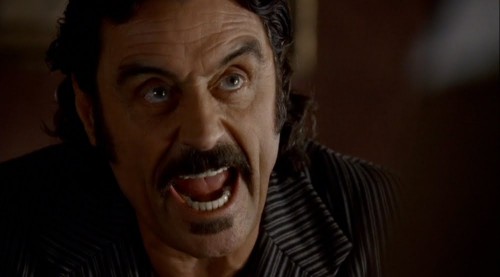 Long-time NYPD Blue co-creator David Milch brought the Wild West to new life on HBO with the stellar Deadwood. Who knew the west was so vulgar? Well, Milch certainly did, but no one laced his prose with better profanity than saloon-owner Al Swearengen (played by Ian McShane). Al peppered his speech with Shakespearean metaphors – using enough adjectives to make a Thesaurus blush – but he was never one to get his hands as dirty as his words: he paid others to do it for him. Besides, he never had to use his fists, not when he could accomplish much more with just a glare of his darkly fevered eyes.

What say you, Unreality readers?  Who are your favorite Alpha Males from TV Land?

I definitely had my doubts about whether giving Batman the Smallville treatment was the best idea, but after a few episodes, I think it’s safe to say that the approach they came up with for…

Talk about dedication. This group of cosplayers took a look at Mike Wrobel’s amazing retro Game of Thrones illustrations (which have been featured here many times) and decided they’d look good in real life too….

I’m not really a forum sort of person, but every once in a while I stumble across a thread that I just can’t shake. I discovered this on reddit a few weeks back, and it…

httpv://www.youtube.com/watch?v=ogEtfIdgjpY I usually don’t post videos that are ten minutes long, because who has the attention span for that these days? But I’ll make an exception in the case of this GI Joe PSA compilation….