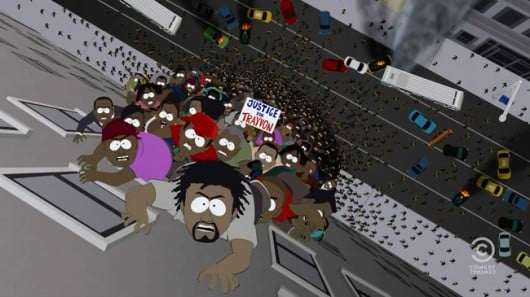 South Park has managed to stay relevant and fresh, for the most part, for almost 20 years.  It’s done that using a combination of being willing to re-invent itself (gradually morphing from pure sophomoric comedy into topically relevant satire), being willing to adopt new technology, and the sheer creative power of Trey Parker and Matt Stone.  (If you haven’t seen it yet, the documentary Six Days to Air is really, really interesting. Come to see how creative people manage an incredibly tight schedule, stay for Trey and Matt telling stories about how they dropped acid and cross-dressed at the Oscars).

One thing that South Park has always managed to generate is comedy that’s so sharp, it’s tough to watch.  Good satire should always make you cringe a bit, and some of South Park‘s most triumphant moments are those that you feel very ambivalent about.  And it’s not simply a case of “I can’t believe they went there!”  Anyone can go there.  Bad comedians make tasteless, stupid jokes that go there all the time.  But it’s the journey, not the destination.  I’m a firm believer of the notion that anything can be funny, as long as it’s funny.  No subject is off-limits for comedy – if you’re creative and talented enough to make it actually funny.

With that in mind, here are 5 episodes of South Park that took that credo to the next level.

To me, Cartman is at his best when he’s sincere about something.  I mean, horrifically, tragically wrong about that thing, but sincere about it.  His usual schtick involves manipulation and deceit, so when he changes gears and plays the “only sane man” card, it can be absolute gold.

To me, South Park is at its best when it’s taking seemingly unrelated things and mashing them together, and out of the mess comes some hilarious and thoughtful satire.

So you can see why this episode is one of the best, and most uncomfortable:  the race riot/zombie apocalypse conflation that Cartman engenders is… terrible.  Awful.  And with the way he deadpans it…

And let’s not forget that this episode ends with Cartman shooting Token.  Who is black.  I mean… I think when I saw that moment, I literally didn’t know how to react.  Uncomfortable to the point of being nonplussed – which is a good state for satire to leave you in.

So here’s the thing about this episode: it’s almost perfect.  The matter-of-fact way Cartman engineers his own downfall isn’t even the best part.  No, the best part is when Butters goes to the “gay conversion therapy” Jesus camp, and, being Butters and completely enthusiastic but straightforward, is really confused.  That’s when the camp counselors try to cheerfully, patiently explain to a bunch of kids why something intrinsic to their being is wrong and needs to change.  The response?

With zero words, they managed to craft the perfect satirical response to such rhetoric, and made it both incredibly funny and mind-warpingly horrible.

Episode 154: “With Apologies to Jesse Jackson”

Honest show of hands.  At the beginning of this episode, when did you realize what the actual answer was?

Oh, you realized it right away, huh?  Liar.

It’s a lot funnier if you get it when Vanna turns over the last letter.  The reactions – Randy’s and especially Stan’s – are priceless.  This is practically the definition of uncomfortable humor.

The way they played this one was great – long silences, downturned faces.  I was laughing too hard to really appreciate just how brilliant this scene is the first time.  Can you imagine how awesome it must have felt to come up with the premise for this joke?

The reaction of everyone to finding out that Ike is sleeping with his teacher:

It doesn’t pack the same “wham moment” of the episodes above, but the entirety of this one is riddled with a low-level discomfort, both at the relationship between Ike and his teacher, and at everyone’s reactions to it.  A thing that South Park does well, over and over, is boil down a particular point, like the tendency for female sex offenders to not to be taken as seriously as their male counterparts, especially if they’re attractive, into one perfect reaction that sums it all up: in this case, the aforementioned “nice.”

So I can’t find the original ‘shopper of these because an image search only turns up the original paintings. Goddamnit Google, can’t you tell when He-Man has been inserted into a picture or not? Slackers….

The final season of Breaking Bad is coming in just under ten days, and so you’ll likely see an increased frequency of posts pertaining to it both here and everywhere else on the internet. We’ll…

I’ve recently been made aware of a certain segment of the population known as “Bronies” or the singular “a Brony.” It’s a term for a male viewer of the My Little Pony: Friendship is Magic…

Game of Thrones is back for season four, finishing off the second half (and maybe more) of George RR Martin’s third book. Fortunately, there’s so much action packed into Storm of Swords, it can easily…