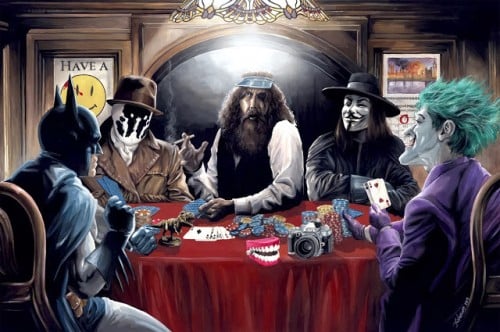 Artist J.K. Woodward decided to see what it might look like if Alan Moore sat around playing cards with some of his most notable creations. Well, he didn’t create Batman and Joker, but he did produce a few of their greatest stories, if not the greatest.

I wonder who would win in a fight between all these guys? I know V has the whole undead ninja thing going on, but Rorschach is pretty scrappy and has the superpower of never allowing me to spell his name correctly on my first try. But Batman is you know, Batman. I think Moore and the Joker would just do some cocaine and let the others fight it out.

You can actually buy a print of this here.

Earlier today we got to see what it might be like if famed abstractionist Pablo Picasso painted superheroes. Now, we turn to a more modern artist, Kaz Omori, who has a superhero art collection of…

A few months ago (my how time flies) I featured a series of “Justice” magazine covers from artist Stanley Lau. He’s taken the lovely ladies of DC and given them their very own magazine, and…

More Batman stuff! I know, I know, it’ll die down after this week. It’s our last hurrah, OK? Who knows when we’re getting any more of these movies. In any case, this isn’t specifically TDKR-related,…