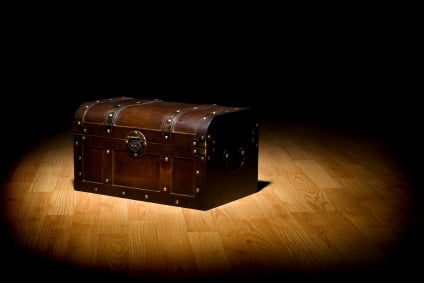 The internet is a fairly large place.  There’s a lot of information out there.  I could, for example, conceivably spend an entire week reading about ocelots and never stop finding new things to read.  Not that I’d be likely to do that.  The only thing I need to know about ocelots is that they’re fox-eared assholes.

But the sheer size of the internet means that there’s always something new to discover.  There’s nothing quite like stumbling onto a site that has a vast array of archived content and realizing that you really like it, and knowing that you have about a month’s worth of entertainment added to your portfolio.

A few weeks ago I wrote about The Editing Room, and I was surprised that some people hadn’t heard of it.  To me, it seems like an old stalwart of the internet, something that a good chunk of the pop culture-savvy would be casually familiar with.  I realized, though, that the unfathomable size of the internet means that it’s really only the top .001% that truly has universal awareness.  So, this is my attempt to share some of my own hidden gems, and hopefully y’all have a few of your own to share. 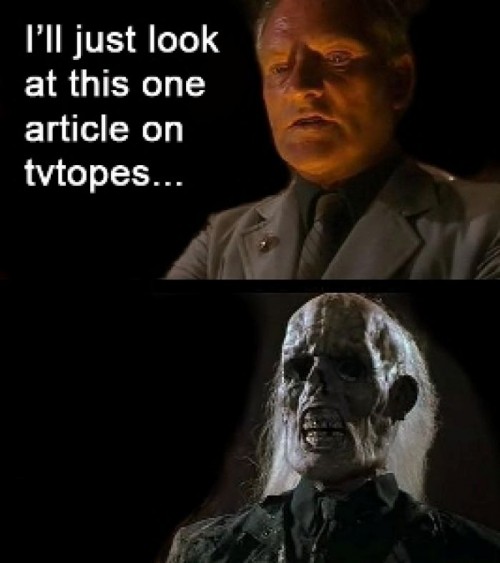 See, this is what I’m talking about.  For some of you, you’re furrowing your brow and thinking, “he’s calling TVTropes a ‘hidden gem?’ What’s next, YouTube?”  Others are thinking, “huh, maybe I should check that out.” For those of you in the second group, I hope you didn’t have anything important to do in the next four hours.

TVTropes is pretty much what it sounds like.  It’s a repository for tropes, not just in TV but in all fiction.  Tropes, very broadly, are narrative devices that make use of audience expectations.  When the hunky male lead looks longingly at the adorable female lead, and the camera lingers on their expressions and the music plays, the audience is going to expect them to hook up.  TVTropes takes something like that, gives it a name (in this case, Longing Look), and then lists a couple hundred examples, neatly categorized by format.

Where it becomes a massive trap is that as you scroll through examples, each example has a link to the source material.  For example, you scroll though and read a snippet about Angel and Buffy giving each other Longing Looks.  You wonder what other tropes Buffy is famous for.  You click on the show title, and are taken to a page that has every trope in the Buffy universe.  You come across the trope That Came Out Wrong.  Let’s investigate!  And that’s how you spend four hours.

Here’s an interesting one.  The SCP Foundation is basically a dressed-up version of telling scary stories around a campfire.  Each “story” is couched in a format consisting of a report on a mysterious object/person that’s being investigated or contained by the Foundation, which is presented as a shadowy organization whose job it is to keep creeping Lovecraftian horrors from being a problem for your Average Joe.

What makes the whole thing tick is the narrative device of the frame.  Each article is presented in businesslike, official language and is tactically redacted to maximize the phenomenon of letting your mind fill in the blanks with something way more unsettling than anything specific could be.

New readers are encouraged to start with the Top Rated pages.  SCP-087 is a good place to start, as it’s a pretty good example of what else you’ll find.

There’s a real variety.  Some are creepy, some are gross, some are more contemplative and broadly unsettling in a Twilight Zone kind of way.  Some aren’t very good.  Some are barely longer than a few paragraphs, some will absorb you for hours.  There’s something for everyone, and a lot of it.

Hidden Gem #3 – The Order Of The Stick

Webcomics (and non-web comics) aren’t really my thing, but I love this one.  The stick-figure comic is set in a world where D&D rules are reality, and covers a group of adventurers that start off on a pretty traditional “make your way through the dungeon and kill the evil wizard” quest that gets, uh, complicated.  It’s almost always played for laughs, but like a good Joss show there are plenty of Mood Whiplash moments and it gets heavy sometimes.

There are also just under 1,000 strips.  So if you like it, again, you get that great feeling of locking in something cool and good that has a huge archive of content.

The cast of characters is just perfect for the setting.  The group consists of: (from the always-helpful TVTropes):

Belkar, in particular, is just so much fun.  He’s the hard-to-pull-off-yet-awesome-when-it-works “Heroic Comedic Sociopath” character type.

I’ve covered this one in a previous post, but in case you didn’t check it out then, do so now.  I’d start with Rod’s posts.  Some of the other authors are very good but they can be hit and miss, and Rod’s always solid-to-excellent.  In particular, I’d recommend his abridged scripts for:

Harry Potter and the Half-Blood Prince (all of them, actually, but this one just kills it)

Twilight (oh my god, I forgive Twilight for existing because it makes this piece of comedy possible)

I could go on for pages, but you get the idea.  Generally, the worse the movie, the better the abridged script.  Although he’s good at pointing out stupid parts of great movies in amusing ways as well. 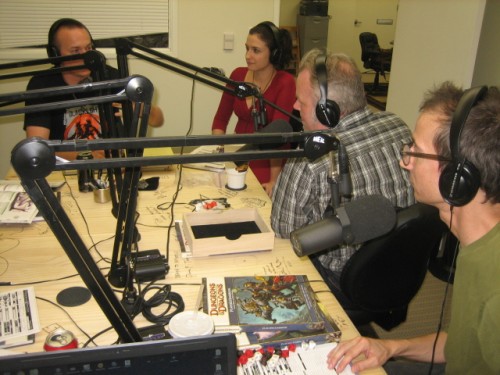 Former Unreality All-Star Joy Bossardet introduced me (and many others) to this amazing podcast in a previous post, but since then, I’ve listened to the entire archive, so I feel qualified to say that this is incredibly worthwhile.  Go read Joy’s post, as it does a great job of laying out the awesomeness of Nerd Poker.  The episodes are each about an hour long, and they’re well into the 70’s, so if you like it, you’ve got some work to do.

So, those are my five.  What are yours?  The only conditions are: relatively unknown, huge repository of content, and related to pop culture.