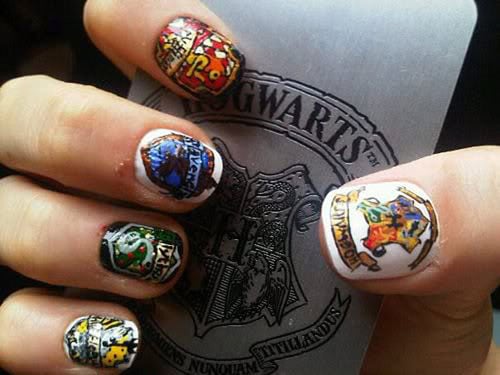 Fanfiction, as a whole, does not have the best reputation.  Name any two characters from any work of fiction, and I guarantee you there is some ridiculously smutty and terribly written fanfiction of them as a couple.  Jean-Luc Picard and Elrond?  Done. Indiana Jones and Lord Voldemort?  Done and done.  Dr. McKay and Jason Fox?  Done, somehow.  Feel the horror.

That’s the bad side.  It exists, it’s out there, but let’s move on.

Here’s the good side.  It turns out, given a large enough population that’s interested in playing around in a sufficiently interesting sandbox (such as the world J.K. Rowling created in the Harry Potter series), there exists some small but significant number of talented, brilliant writers who can blow you away with creativity and passion.

These few, these happy few, can do an incredible thing: they can make you rediscover a world that you loved, and moved on from, a long time ago.  There’s a certain feeling when you close the last book of a beloved series, a very bittersweet feeling.  For me, it was Philip Pullman’s His Dark Materials series.  When I turned the last page, I felt completion and a profound sadness.  It was finished, it was over.

But what if you could turn the page and keep going? 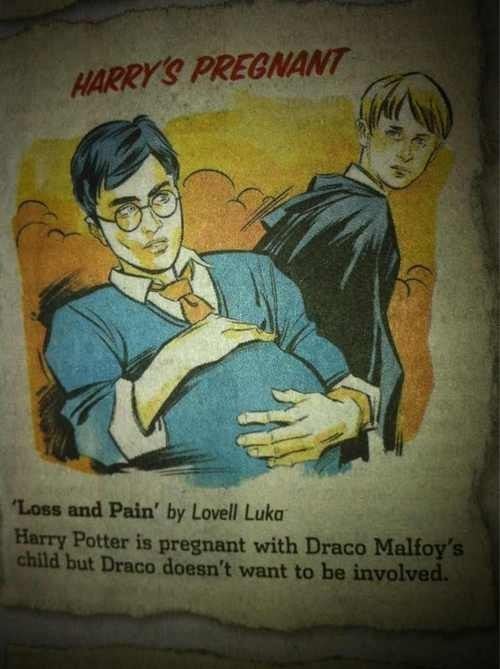 NO NOT THAT PAGE OH MY GOD MY EYES, THEY BURN; LOOK AWAY CHILDREN

Harry Potter is the most popular subject of fanfiction, by far.  On Fanfic.net, there are over 600,000 Harry Potter stories alone.  That’s insane.  Weeding through them to find the .01% that are brilliant would take several lives or a fair bit of crowdsourceing.  Fortunately for you, I have no life and lots of friends, so… without further ado, here are the Three Steps to enjoying some totally worthwhile Harry Potter fanfiction.

Step One: Cut a Hole in the Box 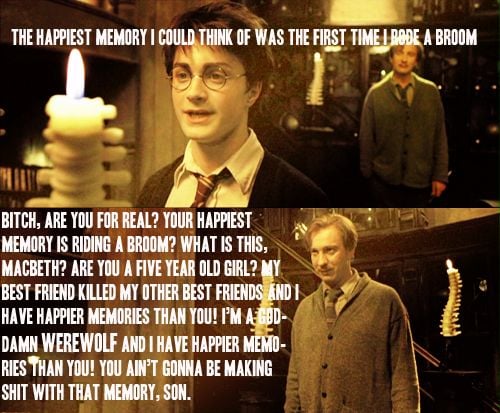 I’m sorry, it’s impossible for me to say “Step One” without saying that.  Step One is actually to re-familiarize yourself with the source material, or “canon.”  There are 7 Harry Potter books, adding up to a little over a million words.  So take a couple weeks and re-read them, lazy pants.  Remind yourself just how amazing a storyteller Rowling is.  There may be plot holes you could drive a battleship through and magic that seems like it does whatever the plot needs it to do, but that woman can absolutely write the shit out of a story.  She created a world that’s so compelling, not only did 2.5 billion people read/watch it, but a couple million took to their computers to play in her sandbox.

If re-reading the entire series doesn’t fit your busy schedule, at least read plot summaries or something.  Everything is derived from the original material, and you’re selling yourself short if you don’t immerse yourself in that first before you dive into the continuation. 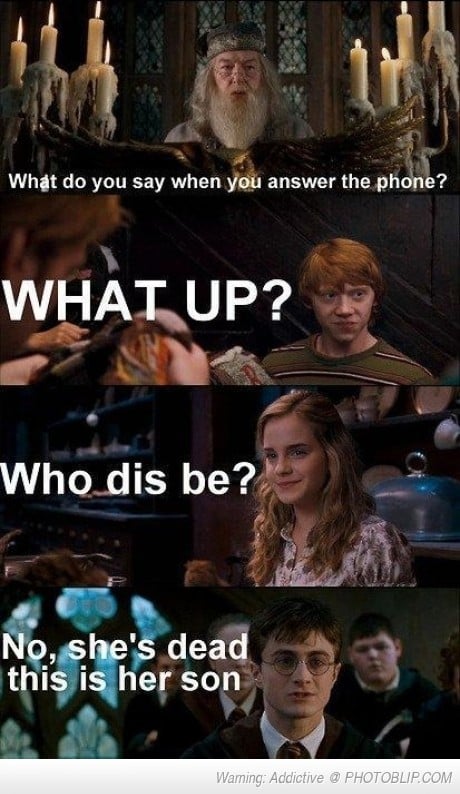 It’s sad but inevitable.  You’re going to have to slightly lower your standards for what constitutes acceptable writing.  You have to realize, the people writing these are doing it for sheer enjoyment.  Actual published authors have line editors – people who go through your manuscript with a fine-tooth comb.  Even good writers have blind spots, like not knowing what the word “bemused” means (hint: it does not mean “amused”) or conflating “its” with “it’s” or doing horrible things to apostrophes.

You have to give them a little slack.  All of the stories I’m recommending are well-written, but some of them aren’t as well-edited.  If you can tell what the author meant, you just have to let your eyes glaze over a bit and not care that a writer split an infinitive.

Here’s a test; just get through this brief example without exploding with rage:

“Oh, Harry Potter, as I live and breath!  Your just in time.  I was just about to tell a joke about too woman being caddy to each other.”

Harry laughed.  “That’s a funny joke,” said Harry bemusedly, “but I really have to get back.  The Weasley’s are expecting me and my friend.”

See, that wasn’t so bad, right?  That vein will go down on its own, just give it a minute 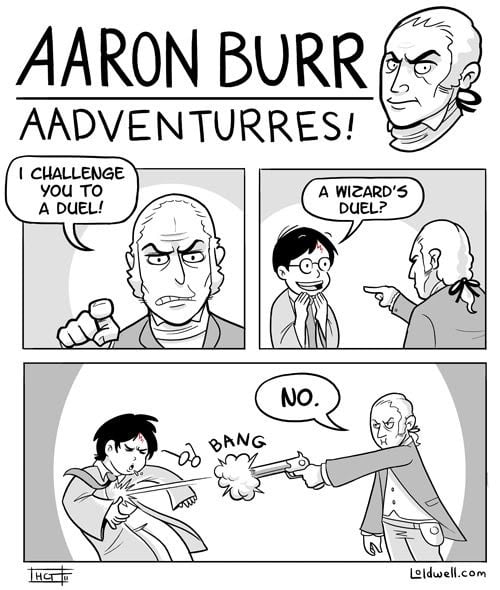 Here are the actual recommendations.  I’ve arranged them loosely based on length, but they can be read in any order.

Author’s description: “Dennis Creevey takes up his brother’s camera after the war.”

My take: Very short and very poignant, this is best read immediately after you finish Book 7.  It’s sad, uplifting, and haunting, but ultimately triumphant.  Book 7 ended with this huge battle where a lot of people got hurt and killed and then jumped 17 years ahead for an epilogue.  This digs a little deeper at the aftermath, at the scars, at what we leave behind.

Author’s description: “Ten years after the defeat of Voldemort, Lee Jordan asks what life was like during the Death-Eaters’ reign for the Muggleborn son of a prominent Tory family, and what he learned as a member of the commission which investigated how they came to power.”

My take: Explores a lot of things Rowling only hinted at, especially how the magical world interacts with Muggles.  Eye-opening, alternates between serious and humorous very well.  Really makes you think about a lot of issues the books brushed over.

Author’s description: “Who was to know Death had etiquette enough to be personalized?”

My take: Taken together, this story, “Cauterize,” and “An Interview with Justin Finch-Fletchley” could be considered an expanded epilogue.  This story consists of snippets of varying lengths of characters who died in the series.  Each afterlife brilliantly tailored to each character and there’s enough ambiguity in their conversations to make this immensely re-readable.   If you love the series and the characters, it’s almost a guarantee that you’ll cry at a few of these.  I admit to nothing, personally.

The Strange Disappearance of Sally-Anne Perks, by Paimpont

Author’s description: “Harry recalls that a pale little girl called Sally-Anne was sorted into Hufflepuff during his first year, but no one else remembers her. Was there really a Sally-Anne? Harry and Hermione set out to solve the chilling mystery of the lost Hogwarts student.”

My take: This is really really really absolutely brilliant writing.  Easily publishable.  An extremely well-crafted mystery with excellent foreshadowing.  The author took what amounted to a typo (remember the Sorting Hat calling out all those names?  Rowling just forgot about one of them in the first book) and thought, “well, what if that wasn’t a typo?”  Fits the tone of the series very well: while it’s a light and easy read, it manages to bring up some unsettling and evocative questions about identity, reality, and memory.

The Very Secret Diary, by Arabella

Author’s description: “’His d-diary!’ Ginny sobbed. ‘I’ve b-been writing in it, and he’s been w-writing back all year’ –”

My take: Concept well-executed.  Remember Book 2, with the basilisk and the Chamber of Secrets, where it turned out Ginny Weasley had been writing in what turned out to be Voldemort’s diary, and he’d been writing back and gradually possessing her?  This is a transcript of that diary.  It’s brilliant, because there’s a moment when you realize that something exactly like this had to happen during Book 2.  Book 2, where the tone was very much that of a children’s book.  Just get over the fact that he calls her “Virginia;” this was written prior to book 5 where Ginny’s full name came out.

This is one of the best characterizations of Tom Ridde – Voledmort- EVER.  He’s charming enough at first to win her trust, with some biting sarcasm that goes over the head of the 11-year old Ginny.  And as the reader, you can read between the lines and see the absolute contempt he has for her.  And as he gets gradually more powerful, more in control, it gets chilling.  Just absolutely horrifying.  This is a damn good read.  It’ll make you want to re-read Book 2 just so you can cheer when Harry destroys the diary.

Author’s description: “The war is over, and all is well, they say, but the wounds remain unhealed. Bitterness divides the Houses of Hogwarts. Can the first children born since the war’s end begin a new era, or will the enmities of their parents be their permanent legacy?”

My take: You will have to remind yourself that this isn’t an actual Harry Potter book.  Could easily be published as a continuation novel.  Feels so close to the original flavor it’s scary.  Very well edited, too.  It would not surprise me if Inverarity was a professional writer.  I really can’t recommend this one enough.  It’s long – definitely as long as the later novels in the series, but that’s a good thing.  If you found someone who’d never heard of Harry Potter (a challenge) and handed him the 7 books plus this one and told him, “this is a series of 8 books, enjoy,” he wouldn’t bat an eye when he got to Book 8.  Can’t think of much higher praise than that.

The Lie I’ve Lived, by jbern.

Author’s description: “Not all of James died that night. Not all of Harry lived. The Triwizard Tournament as it should have been and a hero discovering who he really wants to be.”

My take: If you can take the bad with the good and just enjoy the ride, this is a wild romp of fun and awesomeness.  Basic gist: At the end of book 3, Harry’s experience with the dementors shakes something loose in him and he starts remembering James Potter’s (his dad’s) life.  This is a re-imagined book 4 with Harry as a combination of himself (his cannon self) and his dad.  If you remember the flashbacks to James Potter in the series, he had a pretty healthy dose of ego and flashiness.  Harry is just about the opposite, and the combination of the two is crazy like a fox.

The author writes some of the best combat/duel scenes I’ve ever encountered, the expanded Triwizard Tournament is really compelling, the romance with Fleur is sexy as hell, the Sorting Hat totally works as Harry’s foul-mouthed partner in crime, and if you can ignore the flagrant bashing of some characters and a bit of rough editing, this story is great.  I laughed out loud more times than I can count.