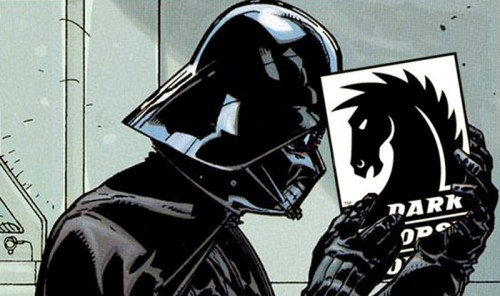 For those of us who’ve been around for more than a few decades, we can assure you young whipper-snappers that, during the 1970’s, George Lucas had most decidedly said he was planning three trilogies and not two as he’s currently insisting (the impending Disney projects notwithstanding). I distinctly remember this news coming out not long after A New Hope (originally only titled “Star Wars”) was a bona fide hit.

To the best of my recollection, George claimed at the time that he had conceived this grand space epic, complete with heroes, villains, and droids. When he sat down and actually started fleshing out the logistics of how to go about telling this story on film, it was only then that he realized what he had imagined was way too long. Initially, he thought three separate films might do the trick, but, upon further reflection, he split each of those films into three films – crafting three unique trilogies – hoping to follow the progression of the classic stage drama which is a tale told over three acts.

It was at this point that he started being asked that singular befuddling question:

“If that’s how ‘The Star Wars’ is structured, then why did you start telling your story in the middle?” 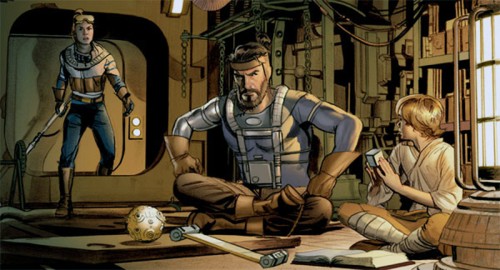 As I recall, Lucas kinda/sorta fudged a bit for an answer, but I believe his explanation was essentially that, with classic Greek dramas, the bulk of the action takes place in the middle – or, for purists, in the second act. That’s when the stakes are raised for all of the participants. The real drama – its heart, its soul – takes place there. After all, the first act is plagued with an awful lot of set-up (think of the Prequel Trilogy and tell me that doesn’t feel like constant set-up); and the third act is all about finally confronting whatever conflict pushed the narrative forward from the very beginning. It’s when all of the players either celebrate or endure their comeuppance. Either there’s a happy ending, and everyone’s mired forever in some Kubrick-esque landscape from which they’ll never truly escape.

Consequently, George felt that 1970’s audiences could most relate to that middle story – the one involving the Empire and the Rebellion and the rest of the gang of interstellar rogues.

Now, if he didn’t say he was planning three trilogies, then to my knowledge this version of events was never corrected by the various media outlets who reported him saying it at the time. 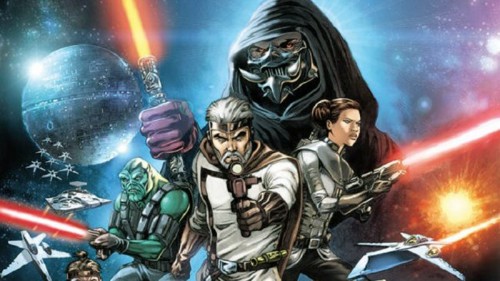 All of this brings me to where I am today in talking about the latest curious addition to the stellar line of Star Wars stories brought to you by Dark Horse Comics. This past week – on Sept. 4th – The Star Wars began with its first issue. This bold undertaking is written by J.W. Rinzler and admirably illustrated by Mike Mayhew but it’s entirely based on Lucas’s original draft screenplay for his saga – that seminal rough draft that existed before Luke Skywalker, Han Solo, and Princess Leia became household names.

For nitpickers who might be reading this, I’m gonna be all frank and earnest with you right now: I’m not about to spoil any plot details because there’s no need. You already know this story — there’s an Empire, some rebels, spaceships, and all that jazz.  This is the kind of release that either interests you or it doesn’t, and I’d imagine you’re all old enough to know which category you fall into at this point. I just wanted to sound off with my own few words in the space I’m weekly provided.

To be honest, I approached this title with an awful lot of trepidation. Over the years, George himself has released snippets of detail about how the various stories that have been filmed worked and co-exist in this document … and, frankly, it never really sounded all that “interesting” (that’s the best adjective I can come up with to describe it). Granted, he’s only released tidbits – flavorless morsels from the meal that’s occupied his mind for so many years – but just the names ‘Starkiller’ and ‘Jedi-Bendu’ scream not only “fan fiction” but “bad fan fiction” to the more cynical among us, consider me included.

And, besides, those of us who’ve tinkered with writing can often times tell you just how far a completed draft of any story actually wanders from its original inspiration! (Yes, I’ve written several novels – none of which I’ve seriously sought to publish – but I do have my first novel set to come out in a few months.) When writing, what we think will work evolves as the tale unfolds and grows naturally more complex. Our friends and family read it; they’ll make suggestions; and we continue to expand the work. In fact, I’d venture to say that there’s usually a pretty substantial difference from conception to completion because (A) how we conceive stories and (B) how they organically unfold are very unique processes unto themselves. 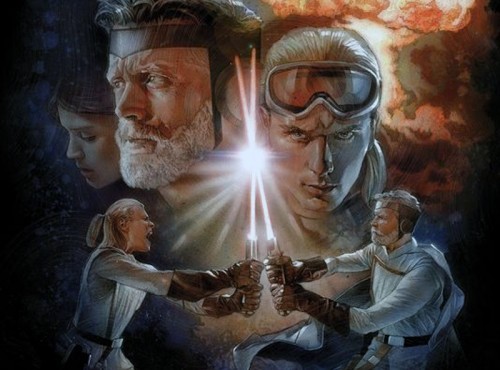 That being said, what’s clear to me in this first issue of ‘The Star Wars’ is that the world George imagined is markedly different from the ones he captured on film back in 1977, 1980, and 1983, respectively. It isn’t as if there’s no merit to exploring the strange, new world that George Lucas initially thought up before revising and/or altering the landscape of that galaxy far, far away. In fact, there are elements within “The Star Wars” that are downright inspired – the Flash Gordon-esque costuming, the focus on principles in a heavily political universe, etc. The issue I would have creatively is what will all of this say about the film franchise as a whole?

If the first issue is any indication, I would argue that Dark Horse’s experiment – while innovative – might likely end up saying very little. What I fear it may do is truly cement that Lucas’s first two installments of his space opera (namely A New Hope and The Empire Strikes Back) are the exceptions to the rule and not the rule itself. I say this entirely because so very much of “The Star Wars” looks, feels, and sounds like the Prequel Trilogy – a vastly inferior narrative creation but visually more colorful – than it does the Original Trilogy.

Yes, that’s an opinion – my opinion – and I stand by it. Granted, this is only a first issue – and I’d still encourage like-minded folks to pick it up, see for yourselves how it all began in the creator’s mind – but there’s an awful lot of set-up and very little action in these pages.

That doesn’t mean I’ll dismiss its significance. I celebrate it because I believe it’s so exceedingly rare these days to get a true insight into the creative process; it’s just that I can’t imagine where this picturesque road trip will take us.

I’m not a huge comic book reader but if I do engage I prefer more of the superhero type stuff.   I just like the drawings and stories a bit more in those.   Plus there’s this…

No amateurs today, we’re going straight professional with comic artist Alex Garner. He’s a master at what he does, and has his own DeviantArt page that I pillaged to assemble this awesome gallery of his best work….

Alright, so I haven’t taken art history class since uh, eighth grade probably, so I’m just going to take a stab and say that this art gallery of various superheroes falls somewhere in between modernist…

It can be hard to pull off a solid X-Men costume, as their yellow-tinted spandex outfits don’t often translate well from the pages of a comic book to real life. And if you go for…

How do you start a letter to a person you know about only through comic books, movies and one man plays put on under the dining room table with action figures while the parents talk… 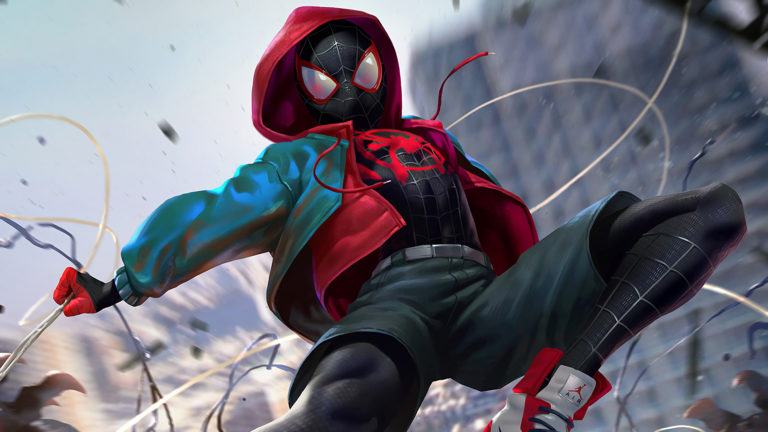 Comic books continue to be released in huge numbers. As a result, interested individuals might want to check out some of the new options that will be released in 2019, which could very well suit…