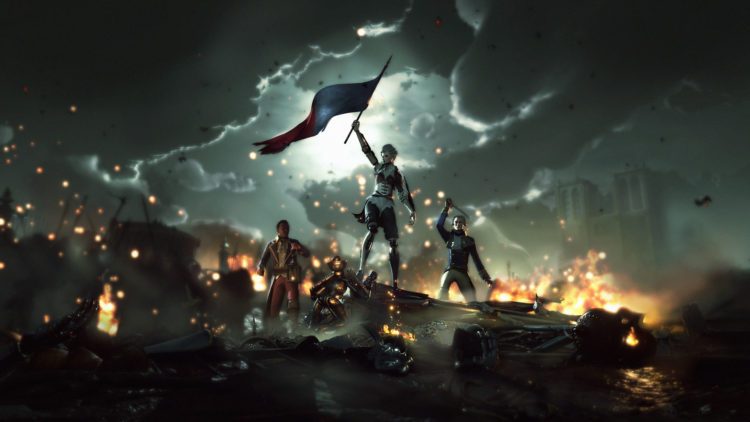 Steelrising takes a vision of an alternate Paris during 1789 and overlays it with steampunk flavoring. This is an odd, yet alluring take on a period of history that’s been done many times over. The revolution of France is sparking, only to have it be quelched by the mechanical monstrosities under the control of Louis XVI. Players will take control of Aegis, who is a rogue automaton, to crush the forces of the King and free the people of France. Aegis is a deadly combatant with cat-like reflexes who was forged by her master Vaucanson, who works as an engineer for the Clockwork King. Aegis is a character who built to bring death to anyone in her way, all with the idea of gamers molding her to be the ultimate warrior to their liking.

Even though the premise of Steelrising isn’t anything too original, the setting, however, is something to behold. Being a strange mix of Bayonetta and Bloodborne, Steelrising may have a new classic heroine waiting to be found. Developer Spiders is sticking to the basic historical facts of France during the 18th century and definitely having some fun with it. Much like the games created by Fromsoftware, this new IP is going to be a dark, bloody action RPG with brutal gameplay. This title came out of nowhere and many people are slowly starting to take notice. Even though it is clearly inspired by other games of its kind, there are some unique factors to keep in mind.

Aegis was originally built to be a ballet dancer for entertainment with royalty. She can do moves that no humanoid can do. This is why the developers over at Spiders went down this route. They wanted players to execute moves and combos that are generally impossible to do in fleshy bodies. With the trailer, there was some raw gameplay that showcased how the combat will feel. Generally, it very much looks like a Dark Souls type of combat system. Light attacks, heavy attacks, blocking, and graceful dodging will be her basic move set. Beyond, that there will be some upgradable abilities in classic RPG fashion. Even though details are a little thing as of right now, the developers did give a little insight on what to expect. What is established is that the enemies will give players epic bladed fights that are hard to compare to. The enemy types in this game are no joke and they will take a certain level of skill to take them out.

There will be a host of weapons at Aegis’ disposal throughout her battle within the City of Lights. Her main weapon seems to be fanned blades which are similar to Princess Kitana’s in Mortal Kombat. She can unleash a flurry of combos with them and even sling out daggers as projectiles. Additionally, she can even put them together and create a foldable shield. The weapons selection will be reflective of the time. Long battle axes, short swords, and staffs can be brandished among the myriad of other items. Aegis fights very much like a dancer with varying flips and twirls which will make her combos a spectacle to see. The battles will be intense and it will take razor-sharp precision and strategy to eliminate the mechanical menaces that are patrolling the streets. Every encounter in Steelrising will be intimate, testing, and sweat-inducing.

The enemies in Steelrising will mostly be all gnarled automatons that vary in size and design. The designers drew inspiration that spans everything from toys to even Greek mythology. Even though the enemies will generally be armed with a bladed weapon of some sort, they will also have the ability to shoot projectiles. Yes, guns are a very real thing in this game and it definitely puts an edge on things. It is unknown whether or not Aegis will be able to have firearms for her to use. However, it is not outside of the realm of possibilities. One factor, however, that is established by the footage is elemental powers. Evidently, there will be ways to enhance the damage to Aegis’ weapons by lacing the power of Mother Nature onto them. This will be a pivotal factor towards combat in the game. Chances are that certain enemies will be weak against certain elements and players will be tasked with experimenting to see what works best.

What was shown were lightning powers attached to a short-bladed weapon. Aegis could summon lightning down from the heavens to fry her opposition. Also, fire seems to be a popular element in Steelrising in which players can light their fist on fire and slam it onto the ground. This will cause a shockwave that will send the mechanical baddies flying to the wayside. Paris will be a fairly open map that will brim with places to explore. Secrets and treasures are waiting to be found throughout the varying castles, alleyways, and neighborhoods. Players will gradually unlock Aegis’ abilities to help reach new areas. Hence, his new title appears to have a little bit of a Metroidvania format to it. Players will be able to fully customize Aegis to fit their playstyle. Considering that Aegis is an artificial being, it is possible that her limbs can be switched out which will grant new moves. Of course, the developers haven’t made anything official, yet. However, that notion does seem pretty plausible given the material that is being established, here.

There is still quite a bit to discover within the world of Steelrising. The developers are crunching to finish up this project before its release date. This is certainly an alluring new world to dig into and it can very well prove to be a worthy companion piece to the other Souls-like games out there. There will be more solid details leaking before it launches and hopefully, this game will spark more installments that will flesh out this interesting alternate version of France. As of now, this game is scheduled to be released this June for Xbox Series X, PlayStation 5, and PC.