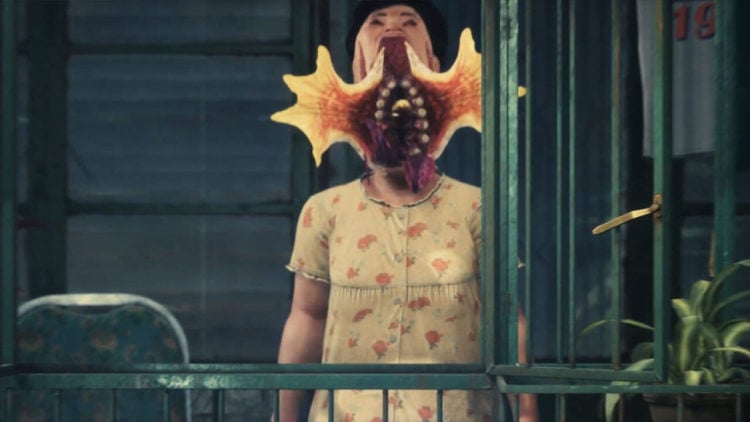 With a new Silent Hill game nowhere to be seen for this coming generation, the next best thing is to introduce a whole new IP from creator Keiichiro Toyama called Slitterhead. This is a new survival-horror title from new indie developer Bokeh Game Studio. This game is currently an enigma for many gamers out there and, needless to say, it has piqued some interest. There’s not an awful lot of information to glean with this new game, but it’s a sure bet that it will provide the same chills that the Silent Hill games are known for. However, Toyama is trying out a new angle to horror by introducing a new threat called the Yakushi. Evidently, the Yakushi is some kind of creature that can disguise itself as a human and perfectly mimic them. Based on stories from the theatre during ancient times, the Yakushi has been a prevalent presence throughout many plays. For whatever reason, it never really reached other mediums until now.

This idea echoes some other cinematic stories from pop culture. Movies such as The Thing, Invasion of the Body Snatchers, The Faculty, and even Puppet Masters come to mind. Granted, these stories were centered around an extraterrestrial threat, which may or may not be a factor with Slitterhead. Right now, Toyama is keeping a pretty tight lid on what this creature is and what its origins are. With that said, this enemy will give players a new type of experience that few games managed to capture. Which is a world that is wrought with paranoia and terror at every corner. Despite the fact that this game sounds like a slow-paced and tedious venture, the developers promise that Slitterhead will have more of an action-adventure motif than anything else.

The Power of Blood

Based on what the trailer was shown, there is certainly some truth behind that statement. Slitterhead more or less gives off a Dead Space vibe. People are being slaughtered in the streets along with the Yakushi being sprayed with gunfire. There appears to be some kind of dismemberment feature, in place. This includes both the creatures and humans equally. There is no question that the action here will be more melee-based and high octane compared to other games from Toyama. There is more of a ninja-like move set found throughout the footage, showing characters leaping off buildings, flipping through the air, and slicing up monsters. It’s difficult to pinpoint who the protagonist of this game is based on what was shown. There was a snippet, however, that showed someone wearing a motorcycle helmet manipulating blood with some kind of “Blood Magic.” It is very similar to Skarlet’s powers in Mortal Kombat 11.

This very well could be the main character for Slitterhead. Of course, nothing has really been confirmed by Bokeh Game Studio, as of yet. Hence, this person is shown falling down from a vantage point and using their “Blood Forged Axe” to chop a monster in equal halves. It is satisfying to watch and there is a good bet that it will also be cathartic to play. Despite that many popular horror-survival games, like Resident Evil, have been prominently known to be third-person titles, recent entries have switched to first-person. Although there has been some speculation on which perspective this game will use, the developers have mentioned that this game will be played in third-person. Of course, when it comes to video game development, these things tend to change on a whim. The development will need to deepen before gamers will know for sure what they’re up against.

Veteran Silent Hill composer Akira Yamaoka will be returning to work with Toyama once again. This revered video game musician is known to go against the grain with his work. Generally, certain tones and ambiance are found in horror games which almost make particular aerial sounds cliche at this point. Music is essential not only in movies but in video games. It helps tie the atmosphere together and reflect the behavior and emotions of the characters. It’s a symbiotic relationship that enables things to gel together. With Slitterhead, Yamaoka is taking a different approach. The goal with this game is to have the music feel “off-beat” and kind of “unaligned” with what is transpiring to the player.

Therefore, it is safe to expect that the soundtrack for Slitterhead will very much be a nice companion piece for the music of Silent Hill. As of now, the development team is still pretty small and Toyama is currently recruiting talent to fill in the required positions. The year 2022 will mark the beginning of the production of this title. Things will be coming together until the end of the year. By that time, Toyama has ensured fans that he will start dropping more information about this game and shed more light on the gameplay details. Even though there has been a calling for another Silent Hill installment, perhaps Slitterhead will bring some satisfaction to that drought. Since production has just started, it is going to be quite a wait until players get their hands on this.

At the very least, it is refreshing to know that the master of video game horror is back to the grindstone of things. There could potentially be another masterpiece in the works, here. It is going to be a hard wait for fans during the upcoming months. At the very least, dissecting the trailer and honing in how this game will play should help. Of course, there is no set date for release. It could take up to 2023 before Slitterhead gets released. When it does drop, it will be available for PC on day one. It is not clear which consoles it will be available for, but it’s a fair bet that will be playable on PlayStation and Xbox whenever it launches. In the meantime, stay up to date on how production is going with Bokeh Game Studio to see how things are coming together.