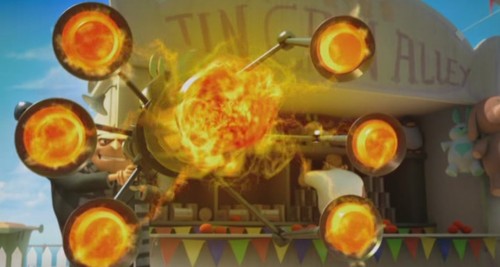 While perusing the internet last week, I came across the latest trailer for Despicable Me 2. Which reminded me how much I liked the first movie—a charmingly hilarious story about a supervillain whose heart is softened by three adorable orphans. I find it relaxing to fall asleep watching familiar movies, so I queued it up the next night. However, I hadn’t seen Despicable Me in a while; this time around, I noticed some downright ominous goings-on in the narrative’s deceivingly colorful background. Don’t get me wrong, I still think this movie is the bees knees—I can’t wait for the sequel—but certain aspects of Gru’s universe are more…well, despicable than others.

1)  Law enforcement officials are awful at their jobs, if not entirely absent

In Gru’s world, it’s clear that multiple supervillains exist. Heck, there’s even a secret “Bank of Evil” Gru uses to fund his exploits. What don’t seem to exist, however, are any superheroes to stop him. Not one. The main antagonist is another supervillain who happens to live in the same town, resulting in a turf war that should attract more attention than it actually does (that is, none) from the authorities.

Pictured in background: a good reason to dial 911. Or at least the neighborhood watch.

And what about that theme park sequence? After stealing the shrink-ray gun from Vector, Gru delivers the line, “Life is full of disappointments…for some people.” Then he bumps an elderly fisherman off a cliff.

Seriously. This (presumably disappointed) fellow is never heard from again.

Once inside the theme park, Gru pulls out this little doohickey to destroy a rigged carnival game…

Pictured in foreground: the best reason EVER to dial 911.

…and then go about the rest of his day. Police detectives never show up to inquire about a deadly hit-and-run. SWAT teams are never called in to that theme park. The evil madman with a plasma death ray in his pocket is free to role-play as Rudolph the Red-Nosed Easter Bunny with his three Stockholm-syndromed hostages.

Also, if Gru or Vector felt the least concerned about the law, they wouldn’t park their supervillain lairs in the middle of rural neighborhoods. 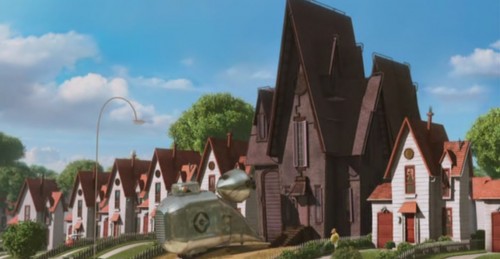 All that’s missing is a sign out front that says, “Come and get me, pigs.”

[Note: the trailer for DM2 does introduce us to an Anti-Villain League, but their existence begs the question: “Where was this league during the whole first movie, anyway?”] 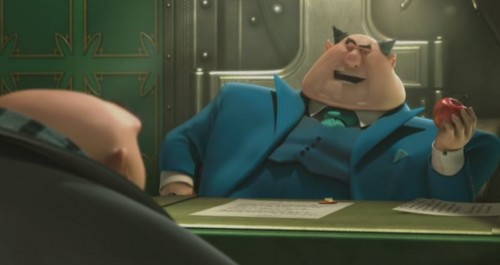 Based on Gru’s interactions with Dr. Nefario, Vector, and Mr. Perkins (the evil banker), somebody is profiting off these crazy thefts. What’s never clarified is “how” or “why.” I just want someone to explain this business model to me.

Before Margo, Edith, and Agnes are acquired (i.e., adopted) by Gru, they live at Miss Hattie’s Home for Girls, which appears to be a front for some kind of underground cookie-selling empire. Oh, and it’s fueled by child slave labor.  Complete with corporeal  punishment… 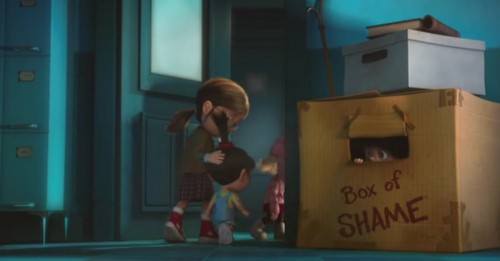 …Not to mention the whole enterprise is a sexual predator’s dream come true.

“…and this is where I hang out in my pantsuit with my shark. You prepubescent girls made this cookie delivery alone, you say?”

4)  Stealing the moon is an awful idea 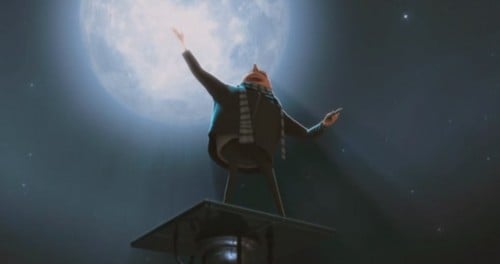 While it’s a pretty convenient plot device, stealing the moon is an objectively impractical plan. I’m no scientist, but don’t we need the moon for stuff? Like, tides or something? Wouldn’t some Day After Tomorrow business go down if the moon suddenly became the size of a grapefruit? Probably, because look what happens immediately following Gru’s moon shrinkage (around 1:05).

So in this world, supervillains are powerful enough to alter our solar system at will. (Unimpeded, of course.) Super duper. And—hey! Wait a second. Back that video up to 1:09… 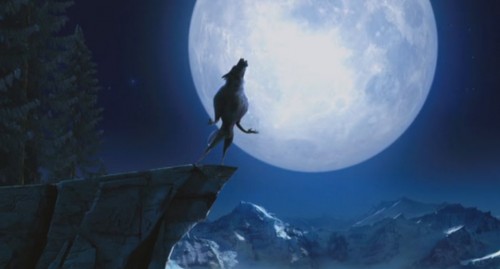 There are no other supernatural characters in the movie; Gru and Vector use technology (and science?) to carry out their nefarious plans. Now werewolves are in the mix? This place just keeps getting better and better. 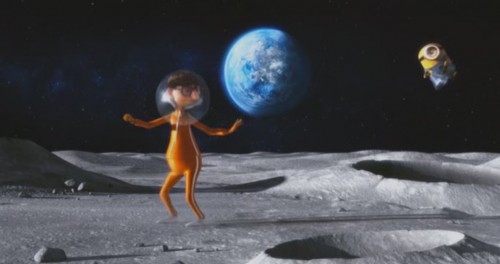 They look pretty happy up there with those whimsical dance moves, sure, but make no mistake: Vector and that anti-gravitated minion will die cold and alone on the moon. Nobody is coming to get them. Not even Vector’s dad. 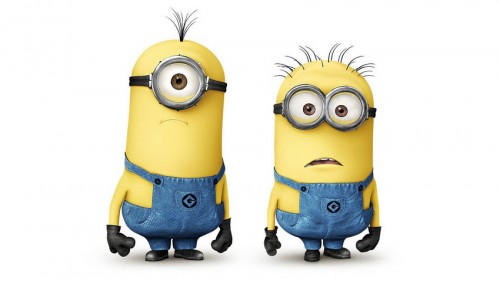 These walking twinkies are highly entertaining, but also kind of creepy. And where the hell did they come from? Are they aliens? An experiment gone wrong? Did Gru create them as ad-hoc children to make up for years of self-imposed loneliness? The Despicable Me wiki says, “Their existence as artificial beings is noted by the final schematics in the little girls’ room. It is however unknown how they came to be and who made them.” Well, that explains why the poor bastard on the moon doesn’t need a spacesuit (as Gru did), but not much else. I want answers!

You see that circle around you? That big, glowing circle that you are standing in the middle of? I want you to take two steps forward, right now, out of that. That, my friends, is…

It’s almost Christmas! It’s that wondrous time of year when the film community gets up in arms over the Oscar nomination process, and maybe a bunch of other awards, too. Some of those awards have…

(click to enlarge) I didn’t take Good Friday off, as I figured there’d still be enough people around to read, but in any case, I hope those who are celebrating have a happy Easter this…

3.5 out of 5 stars Are the Muppets still relevant? That’s the central question behind both the idea of a Muppets movie, and, it turns out, the movie itself. The Muppets is a return to…

Many times when movies get released in other countries you don’t see the original movie posters that the studio or marketing companies dish out.  Mainly because the language is different.  In addition, in other countries…

This weekend, I was doing a bit of due diligence by trying to catch up on a few sci-fi classics I’ve missed over the years. I’ve got Forbidden Planet, Ghost in the Shell and Metropolis…