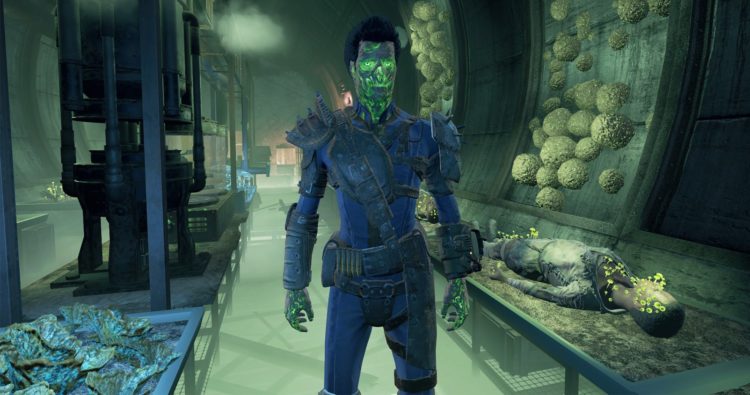 Radiation plays a huge role in the Fallout setting. After all, the setting exists because the pre-apocalyptic superpowers engaged in a nuclear exchange, which has caused the collapse of human civilization. With that said, it is important to note that the radiation of the Fallout setting is the radiation of a retrofuturistic setting that was never particularly interested in sticking to real world science in the first place, meaning that it can do things that real world radiation cannot. In particular, Fallout radiation can cause much more fantastic mutations than what its real world counterpart can manage, as shown by the mutation system that has been introduced in Fallout 76.

What Are the Five Best Fallout 76 Mutations?

Fallout 76 mutations can offer massive bonuses to interested individuals but the problem is that they come with massive penalties as well. As such, the classic comparison would be a double-edged sword that can both help and hinder the user. With that said, there are some mutations with bonuses that outweigh their penalties to a greater extent than others, particularly when interested individuals make an extra effort to optimize their use. Here are five examples of the best mutations from Fallout 76:

Marsupial is one of the most entertaining options that can be found on the mutations list. Effect-wise, it will cost the player 4 intelligence but in exchange, it will provide them with a 20 bonus to their carrying weight as well as a huge boost to their jumping ability, so much so that they can jump close to three times their height. Thanks to this, players can navigate the environment with huge jumps, which can be pretty fun for people who are in the right mood to enjoy such things. Furthermore, these jumps can enable interested individuals to reach otherwise unreachable locations, thus enabling them to experience more than ever before. With that said, there is an issue with Marsupial in that while it provides players with a much enhanced jumping ability, it doesn’t actually do anything about their ability to survive falls from a great distance. As a result, it is perfectly possible for a careless player to kill themselves by jumping off of a rooftop that is too high off of the ground. Due to this, interested individuals might want to look into the Goat Legs perk, which should make them that much more survivable by soaking up a set percentage of the fall damage that they sustain.

Carnivore isn’t as exciting as Marsupial, but it places higher because it is very practical in nature. In short, food is important in Fallout 76, which is why there are a couple of mutations called Carnivore and Herbivore that lets interested individuals consume food of the right type with no issues whatsoever in exchange for locking down the consumption of food of the other type. For instance, if a player chooses Carnivore, they can eat either raw meat, spoiled meat, or cooked meat, but they won’t be able to eat any vegetables unless those have been cooked into soups or gumbos. Meat has better HP effects than vegetables, thus making Carnivore more useful than Herbivore under most circumstances.

Talons are fun because they provide players with a set of claws for an additional 25 percent damage in close quarters combat as well as the ability to inflict bleed damage for 5 seconds at the cost of 5 agility. As such, it is an excellent choice for someone who wants to pound their enemies into ruin in an up-close and personal manner, particularly if they remember to bring either a pair of brass knuckles or some other compatible weapon with them. The loss of agility hurts, but it can be mitigated to some extent with the effects of the Evasive perk.

Traveling long distances can be a real hassle, which is why Speed Demon claims the top spot on this list. Essentially, it provides a 20 percent boost in movement speed plus faster reload times in exchange for both higher hunger and higher thirst rates while moving about. Suffice to say that these provide huge benefits both in and out of combat, particularly when players take the right approach to better manage their increased need for food and drink.

It’s become fairly obvious that even in this age of kickstarted Veronica Mars movies and Netflix resurrected Arrested Development, one beloved fan favorite isn’t going to be coming back, Firefly. It’s cast and creator are…

httpv://youtu.be/BX1fs0_Rbbk I can’t seem to shake Mass Effect 3 out of my system, and it looks like I won’t be able to any time soon with free DLC out this summer to hopefully fix the…

Sometimes I have an idea for a post and it goes nowhere. I won’t be able to find enough of the images or videos I need, and something I thought could have been fun ultimately…

httpv://www.youtube.com/watch?v=QEavARJOptg&feature=related Someone apparently set out with the goal of making the most hideous Oblivion character that was humanly possible, and boy, did they ever succeed. Once upon a time the horrific looking creature was humanoid,…

So I know at least a few of you out there are fellow Starcraft 2 players  like myself. But for the uninitiated, “cheese” is a term where someone uses an incredibly unorthodox tactic to…