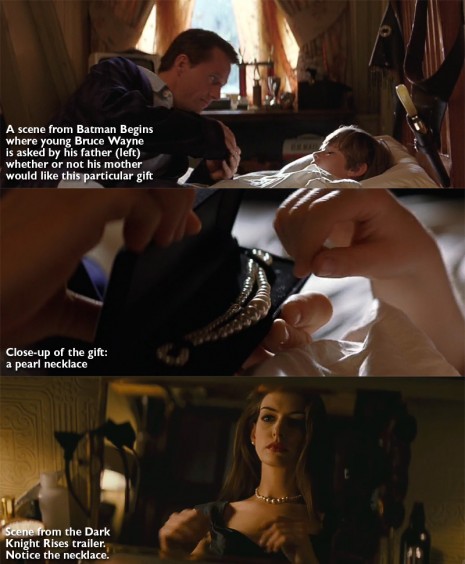 One more thing to add to your appreciation of the Dark Knight Rises trailer I posted earlier today. Some intrepid movie sleuth spotted something that had to have been an intentional throwback to Batman Begins, though I’m not sure if it will end up being of greater plot significance.

Catwoman, the master thief, has apparently lifted Bruce’s mother’s necklace. I thought it was stolen when they were mugged and killed, but perhaps it’s been floating around the underworld ever since.

Anyway, it’s a cool little catch I thought you’d appreciate. Also, go back and take a look at the “R” in the “ROGUES” sign during the football scene. I imagine you might already be able to guess what it looks like.

He married the 50 Foot Woman, and had seven half asian/half dinosaur babies who can breathe blue fire. I can’t imagine how they were conceived. No seriously, I can’t, look, he’s got nothing going on…

So I was about to write a list of “Once Great Directors Who Are Struggling” including, in my opinion, Steven Spielberg and Ridley Scott. over the last ten years or so But I remembered that…

As CGI slowly seems to be eclipsing more and more movie sequences that might have been rendered using practical effects, its important to look back and honor the work of Stan Winston, special effects pioneer….

2 out of 5 stars It seemed like just the right sort of moment for a film like this. With Occupy Wall Street protesting that 1% of the country is running away with the money…

httpv://www.youtube.com/watch?v=KG4NyTP6OlQ Good impressions of celebrities never get old, and if you’re an up and coming actor, it’s a good way to quickly get noticed on the internet. Today we take a look at young Ross…

I spent my last weekend binge watching foreign films with my friends. I’m the type of person who elects to have subtitles even if dialogue is in a language I understand, so I never had…