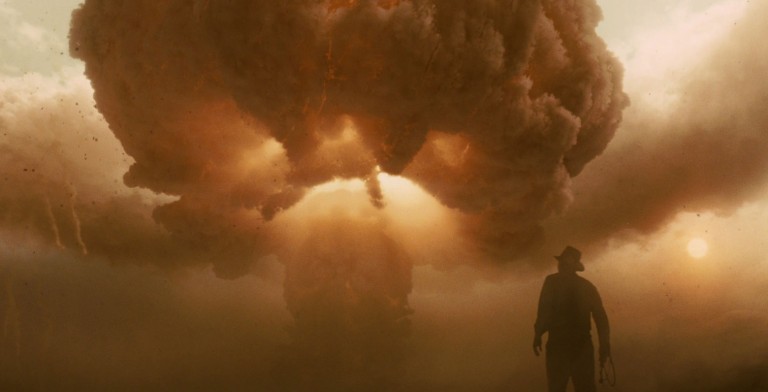 Just as the news of a new Star Wars has invited even more criticism of the Prequels, so too has news of another Indiana Jones invited un-fond commentary on the last movie in that series. Kingdom of the Crystal Skull, for those who don’t remember, was the movie that finally made people realize how good Temple of Doom always was. Which, in a way, is a good thing, because that movie owns. Sadly, Skull’s reputation has slipped resolutely down from being the weakest of the Indiana Jones series to an outright terrible movie.

YES, LUCAS BROUGHT MOST OF THE NEW STUFF

It’s a fairly well-attested fact that Lucas was the one who brought the much-maligned “interdimensional aliens” into the mix. People get hung up on them, thinking it breaks with Indiana Jones tradition to the point of absurdity. Admittedly, aliens seem strange at first — but there’s a clear string of logic that gets you from Nazis in Cairo to E.T.’s in Nevada.

The core trilogy was set in the thirties; its hero cast in the mold of an old serial adventurer from that time period. He trots the globe, looks for buried treasure, and fights Nazis — the international enemy of the time. And that’s Indiana Jones: his movies resemble the popular stories from the time they’re set in, and his villains are the global menace from the same.

So, you move the series ahead by the twenty-ish years since its last installment, and you get the fifties. Which means three things: Cold War paranoia, cheesy sci-fi, and The Bomb. We’re talking about a decade that included the Red Scare, The Day the Earth Stood Still, and the original War of the Worlds. It seems that this is the moment of cinematic (and American) history that Lucas thought Kingdom of the Crystal Skull should take us to.

THE OLD STUFF IS THE WEAKEST STUFF… 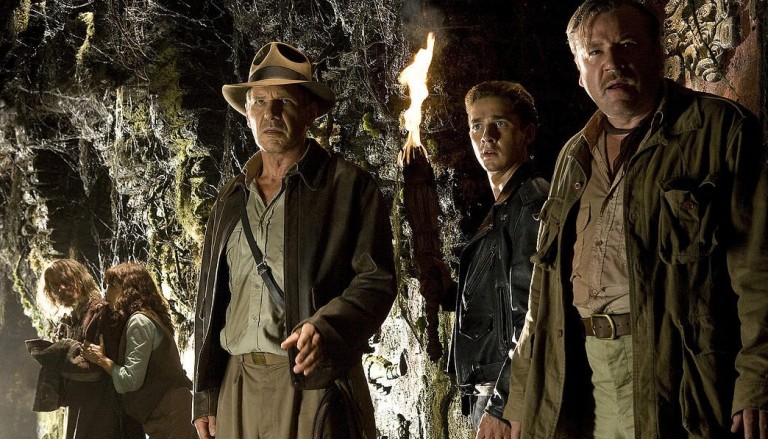 Not that it’s a flawless journey. The Indy series made its name with the breakneck adventure pacing that most movies totally botch, if they even try it at all. Raiders chains together set pieces with a speed and ease that truly boggles the mind. Unfortunately, if Kingdom of the Crystal Skull suffers from anything, it’s pacing. The story just goes slack in places — but the thing is, most of those slack bits hit during the parts that feel the most like they’re trying to recapture the old glories of the series.

Take the sequence in the Russian jungle camp. Sure, it has some solid bits (Indy facing off with the skull, for instance), but the movie lets its foot off the gas in a big way. It goes for exposition when it shouldn’t, and keeps trying for well-intentioned but ultimately fruitless callbacks like the python. All that stuff gets in the way of the unfolding plot to play catch-up, something the similarly backstory-heavy Last Crusade did a lot less and a lot better. I think this is part of why the jungle chase doesn’t register for a lot of people: It doesn’t have nearly the lead-in that the Raiders truck chase did. 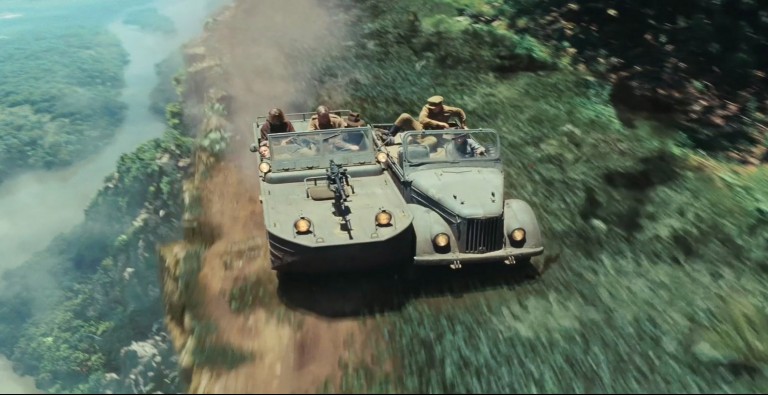 Other nostalgic moments fall a bit flat. One thinks of the earlier scene where Mutt and Indy raid a tomb. Again, there’s some nice moments (like the scorpion callback), but it’s hard not to remember the better versions of this scene from each of the other three movies.

We see law of diminishing returns every month, in every franchise this industry puts out. It’s just hard to keep drawing water from the same well. Kingdom of the Crystal Skull is at its weakest when treading familiar ground. As far as I can tell, the “old school” parts of this movie were what got welded to Lucas’s initial sci-fi pitch.

…AND THE NEW STUFF IS THE BEST STUFF 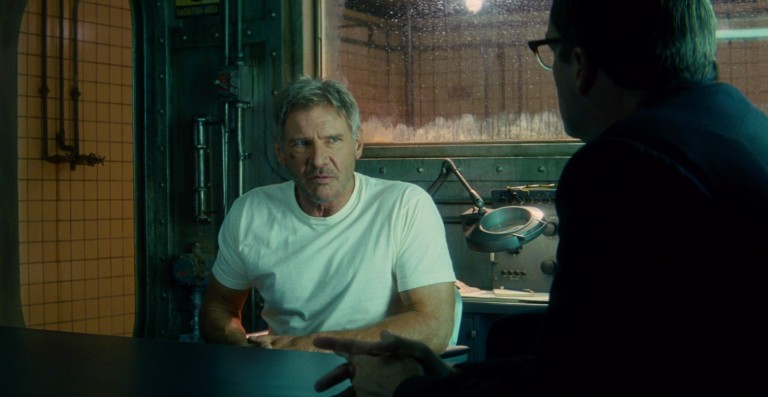 I’ve already said why I think adding superior-to-mankind aliens to the franchise makes a lot of sense, but there’s a number of other unique moments in Skull that tend to get thrown out with the bathwater.

Like the beginning. After that controversial opening shot where a gopher hill replaces the Paramountain (Hint: it fits snugly with this franchise’s love of undercutting the big hero moment), Skull gets to business with a totally fun soldier/teenager drag race. I really like this bit, because we quickly get a sense of where and when we are — plus, this is quite literally vintage Lucas at work. It caps off with the hint of the atom bomb in the sign of a nearby Atomic Cafe, and goes on to take us straight to Area 51. So far, so great. 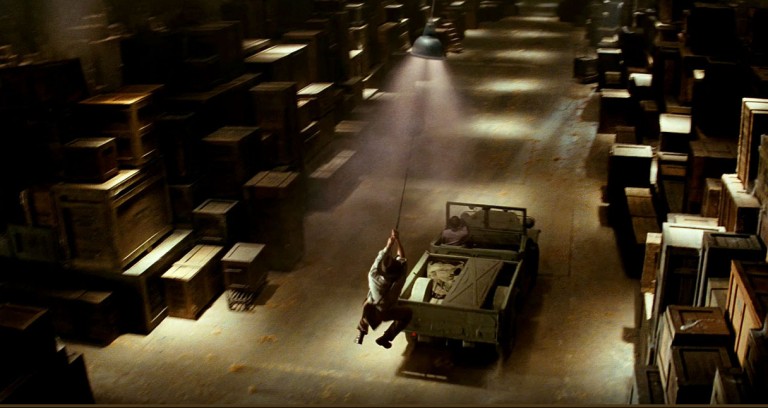 The weird interlude in the nuclear test town is even better, and an amusingly bizarre way to show us how out of place Indiana Jones has become in the “modern” world. And okay… I know the fridge scene is a lost cause for a lot of folks, but that shot of Indy against a mushroom cloud could easily rank as one of the best images from the series.

Even Mutt, a contentious addition to the series at best, has his place. Shia LaBeouf does a good job channeling the resentful greaser with a chip on his shoulder (actually, this was the first time I seriously considered him as an adult actor). The idea of legacy seems natural, too. Lucas and Spielberg are both fascinated by the idea of what fathers hand down to their sons; besides, the series has already brought Indy’s family history into the forefront once.

SKULL SUFFERED FROM AN IDENTITY CRISIS 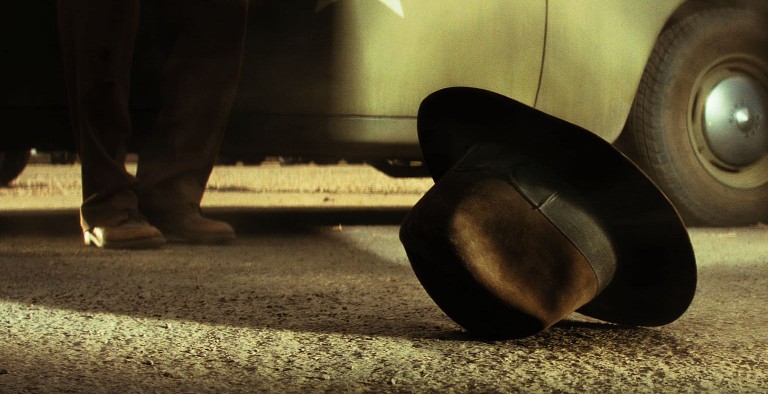 The point I’m trying to get at in all of this is that Kingdom of the Crystal Skull doesn’t quite know what movie it wants to be. It oscillates between taking Dr. Jones to a weird new place he’s never been and letting him slip back into more familiar routines, to an eventual schizophrenic effect that turned off a lot of people. It went halvsies on its concept and paid for it in the court of public opinion.

But, I would suggest try and appreciate it for the sequel-gone-slightly-awry that it is. Truthfully, the Indiana Jones series never topped Raiders of the Lost Ark. I saw someone recently refer to it (Raiders, that is) as one of the few flawless movies in film history, and that’s a pretty fair analysis. Temple and Crusade suggested two wildly different directions for the hero to go, and neither quite channeled the sheer electricity of the original despite all the other great stuff they brought to the table.

Skull continues in that tradition — admittedly, a little clumsier and a little later than expected. But there’s a lot of cool stuff going on under the hood, and the movie (as well as its producer) deserves a better reputation than the one it has these days.

httpv://www.youtube.com/watch?v=4TdczoetXk4 I’ve seen a number of films that have tried to bring Mario into the real world before, but this was one apparently so revered, it was chosen to be a film bumper for SXSW…

Martin Scorsese has a been a hero to many in his long career, so it’s no surprise to hear he’s inspired an entire art show dedicated to this life’s work. It’s this Friday at…

(click for full size) OH HAI READERS I’ve only seen The Room once, unlike people I know who have watched it probably a dozen times at least. That said, it was SO memorable and SO…

It’s… it’s so organized… no words, should have sent a poet… “What about this one?” My husband held aloft a horror triple feature, retrieved from the depths of the Blu-Ray bin at Wal-Mart.  A weekend…

This is a totally new one to me but did you know that one of the most played characters in the history of cinema is Cleopatra?  We’re looking at well over 50 renditions of the…

Since Disney movies pretty much wallpaper the memories of our childhood, we sometimes forget to take them seriously as adults. Personally, I’m a massive fan of pretty much every animated feature made by Walt Disney…