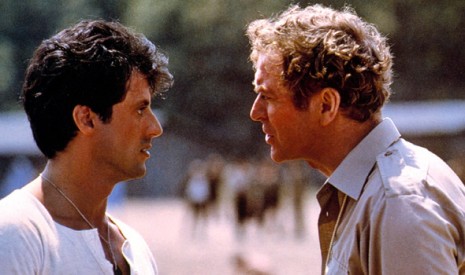 For some reason I don’t think the movie Victory really got the credit it deserved.   I don’t know.   It was made back in 1981, had some pretty prominent named actors and the premise was awesome.   I think somehow though, it kind of had a hard time telling the viewers if it was a sports movie, war movie, or was even making a political statement.  I think it tried to be all three and maybe did too little of all three?  Anyway, I’d let you guys decide.  For those that don’t know, here’s a quick sentence to tell you the summary.

“As allied POWs prepare for a soccer game against the German National Team to be played in Nazi-occupied Paris, the French Resistance and British officers are making plans for the team’s escape.”  The movie starts Sylvester Stallone, Michael Caine, Max Von Sydow, and Pele.   Yes, Pele.   He’s actually a decent actor.

In any event, you can check out the trailer after the jump and decide for yourself if you’re gonna Netflix it……

God the narrator’s voice is horrible but I think the trailer is half decent.