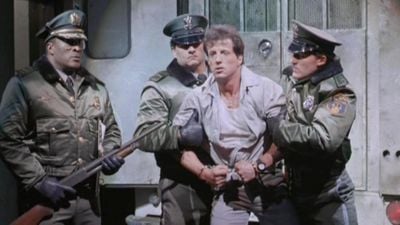 Of all the action movies Sylvester Stallone did back in the late 80s and early to mid 90s I think that Lock Up feels like the least known.   There’s almost a cult feeling to the movie.   But since I love prison movies there was just no way I could leave it off of our movie recommendation list.

For those who need a little bit of explanation, here’s what the movie is about:  Frank Leone is nearing the end of his prison term for a relatively minor crime. Just before he is paroled, however, Warden Drumgoole takes charge. Drumgoole was assigned to a hell-hole prison after his administration was publicly humiliated by Leone, and has now arrived on the scene to ensure that Leone never sees the light of day.

It’s a fun little cat and mouse game.  Drumgoole is played by Donald Sutherland and he does a hell of a job.   It’s exactly what you’d expect of a 1989 pseudo action film starting Stallone.   But it’s definitely worth your time.  Trailer is after the jump…..

This beginning trailer music is so bad it’s not even funny.