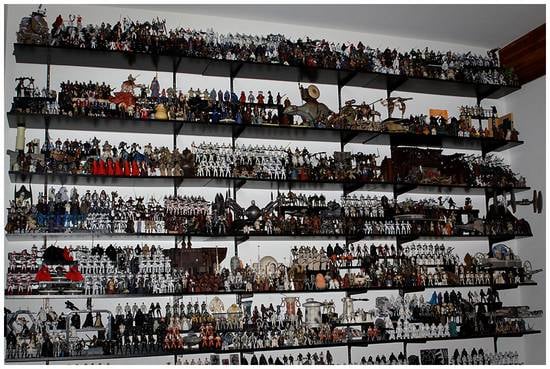 Just what the hell are you looking at here? Why that would be a collection of roughly eighty billion Star Wars figures, which I actually think features more characters than the actual movies had in them. The dude could man a 1/12th size Death Star with that compliment of Stormtroopers alone!

I’ve always wondered what inspires people to collect things to such a degree. I topped out at about 300 assorted X-Men, JLA and Avengers figures, WHEN I WAS TEN, and tbey’re all messed up due to the fact that I was repeatedly slamming them into each other. I also have a binder full of every Pokemon card in pristine condition from the first three sets released, but again, this was the better part of a decade ago…..except for that pack I bought last week because I was curious.

There are a ton more pictures of the details of this collection, which you can find here. Good God.

Am I an idiot that all this time I thought that aliens were elaborately crafted puppets and robots with no one actually inside them? Yeah, I probably am. I need to watch those movies again….

Alright, so I’m starting a new feature here on the site, because I’ve received some encouraging notes that a lot of you for some reason or another actual value my opinion when it comes to…

We’ve featured a lot of artist’s renditions of Disney Princesses, and have also covered the seven deadly sins to some degree, but the two have never met. Until now. From DeviantArtist Chill07 comes this excellent…

Sometimes, it is easier to notice the bad acting than it is to notice the good when it comes to horror films. But it is important to be aware that how enjoyable a horror movie…

httpv://youtu.be/J27JZrsiZJY Alright, I know we’re going a little superhero happy this week as the Avengers comes out on Friday and I can’t stop talking about it. Yesterday, I postulated that we’re a bit to saturated with costumed…