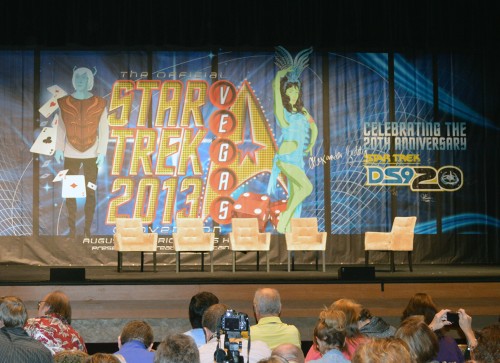 Conventions are a blast. And a Star Trek Convention is an animal unto itself.

After a 16-year drought, I and my lovely wife broke down and took in Creation Entertainment’s Star Trek Convention in Las Vegas (August 8 – 11) held at the Rio Hotel and Casino. While I can’t confirm the actual number of Trekkies, Trekkers, and general Trek enthusiasts in attendance, I can say that I heard the number 6,000 batted around a couple of times. (I’ve done a few online searches, but I’m coming up empty with a definitive number.)

Why had we stayed away so long?

Well, I don’t want to beat a dead horse (with a phaser, nonetheless), but let’s just say that our previous experience with a Creation con in Arizona was everything but stellar. I try to cut organizations some slack when it comes to handling crowds of such volume; it ain’t easy, it never is, and all that jazz. But if there’s one thing I learned from my time in the Vegas Collective is that not really all that much has changed in 16 years. Creation is still milking fans dry at practically every conceivable opportunity with (sadly) more and more stars happily jumping on that ‘gravy train’ bandwagon. And in exchange for shuttling up some serious cash, Creation still treats fans with so little respect. 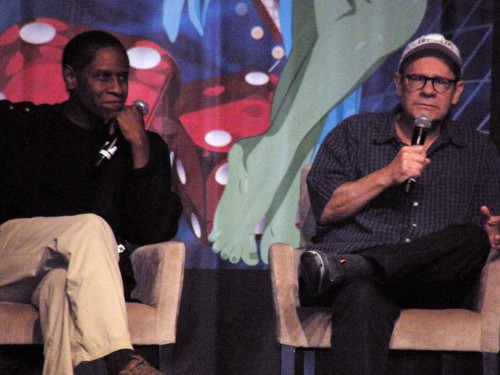 Don’t get me wrong: I’m all-in for capitalism. Always have been. Always will be.

Where I differ is that I think if I’m already paying a star $X for a photo opportunity then I believe the autograph should be done gratis. It isn’t, and it isn’t even close.

So Bill Shatner seriously thinks I should pay, say, $150 to have a picture with him and then tip him another $100 for an autograph? (These numbers are not actual, but let’s agree they’re in the same quadrant … erm … ballpark.) This guy is one of the busiest working professionals out there. He has more irons in the fire than a slow-moving blacksmith. Still, he thinks Star Trek fans ought to subsidize the cost for his hairline maintenance?

Long gone are the days when stars – real, legitimate movie and TV stars – simply “did it” for the fans. Nowadays, they’ll do it for some serious scratch and nothing less. That makes me sad for a number of reasons, but the single-most important one is that there really hasn’t been a phenomenon in the history of television like Star Trek. If nothing else, Trek was the first of its kind, and one would think that might count for something. As much as I can appreciate the need to make a house payment, don’t actors make enough? Between salaries, bonuses, and residuals, I’d have to think that at least some do.

That’s the downside to commerce, and, yes, I lay blame firmly at Creation’s feet. Fans are paying enough to simply enter the place – don’t even ask how much this cost me and my wife (and I know it pales in comparison to what some pay for ComicCon) – and I’d like to see all of us treated better for it.

As for the entertainment? 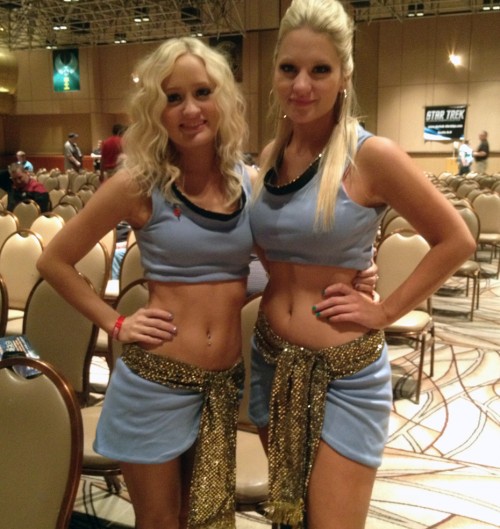 Well, there’s nothing quite as intoxicating as getting the chance to sit and listen to the tales your favorite stars weave. Yes, some of it can be a bit tedious (“Haven’t we heard this before?”), and some of them can be a bit tiring (“Seriously, Mr. Takei, you’re going to speak about the LBGT community again?”), but much of it is done with the sentiment in the right place and an honest appreciation for sharing.

Plus, there are plenty of stories involving on-the-set pranks, pratfalls, and hijinks. Those are the most fun.

Did I learn anything revelatory?

Alice Eve – she played Dr. Carol Marcus in the recent Star Trek Into Darkness – is a pretty smart cookie, though I wasn’t buying her argument favoring the casting of Benedict Cumberbatch as the legendary Khan Noonien Singh. Her argument was imminently logical, but it still handily dismissed the canon that already established Khan’s personal heritage. (It’s the same argument essentially that Ronald D. Moore has always ponied up for making BSG’s Starbuck a woman, and, yes, that was rubbish, too, so far as I’m concerned.) 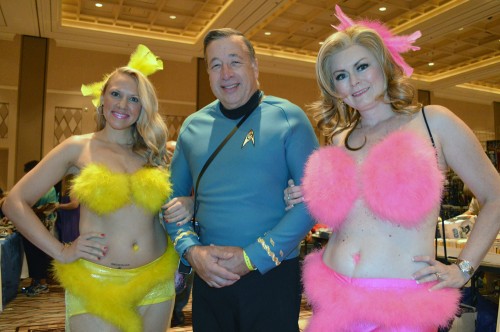 Walter Koenig – bless his strong heart – continues insisting that he really has no axe to grind with William Shatner, Gene Roddenberry, or Leonard Nimoy … though all-the-while he sounded more and more like that’s only because he already ground the previous axe into dust.

All hail Karl Urban! As a long-time Trek fan, he actually went after being a part of the new franchise. For my tastes, his is the only character JJ’s gotten so close to perfection; that’s because Karl truly understands McCoy. As he points out, there are similarities between what he’s done with the role and what DeForest Kelley did; but he also strives to bring something fresh to scenes when he can. Also, he totally rocked Dredd, and Trek fans appreciated that.

The entire cast of Star Trek: The Next Generation clearly had way too much fun while filming their seven seasons; and their honest delight, respect, and open admiration for one another seems as genuine today as it was when the show was in production.

And Terry Farrell can work a crowd like nobody’s business.

Plus, she looks damn sexy at her age. 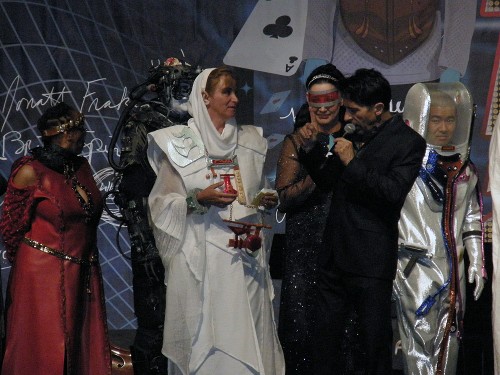 A tremendous amount of the weekend coverage dealt with this being the 20th anniversary of the premiere of Star Trek: Deep Space Nine – the vastly underappreciated incarnation of Trek if there ever were one – and it was nice to see the red-headed stepchild taking center stage for so much of the festivities. It took me a season or two to seriously appreciate DS9’s storytelling – and, no, I don’t buy all that “it’s just so DARK” crap – and methinks that’s because it really did try to examine the human condition in a way Trek hadn’t done consistently since the original. Perhaps it shone the light too brightly, and maybe I didn’t like all of what I saw.

While I’d never christen it my favorite version (TOS rulz!), it certainly had the most interesting assortment of characters. What I find about DS9 is that most of its ardent fans don’t “love” the episodes that I “love,” which only underscores I saw the show a bit differently than they did. 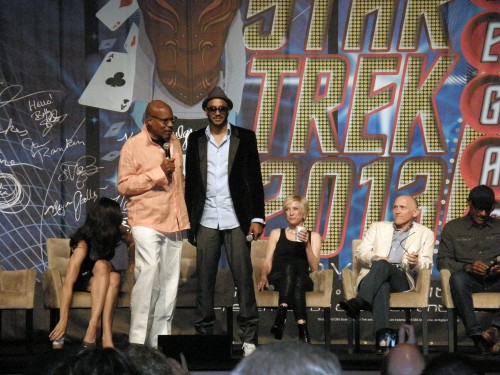 I could go to even greater lengths, but I hope you get a sense that – so far as my entertainment dollar was stretched – I didn’t feel short-changed in the slightest. Between the speakers, the music videos, the guest panels, the performances, and the cosplayers (long live green women!), the 2013 convention was everything a Trek fan would, could, and should want. I’ll definitely go again, but I’ll probably skip a year (or two) so that there’s something fresh and original to see.

In the meantime, I’ll continue to live long and prosper!

Let’s face it. These concepts were scary when they were movies but as children’s books they’re even more terrifying. No chance my little boy would be reading any of these any time soon.

One of my favorite topics to discuss in the entire world is 80s movies.  I’ve made this comment about a million times when I’ve said that they just don’t make movies like they did in…

Fanfiction is like sashimi.  In theory, the idea is kind of revolting, but in the hands of someone who knows what she’s doing, it can be surprising and wonderful in all kinds of ways. I’m pretty…

A few weeks ago, someone posted Pokemon fabrics from their workplace.  This amazing woman ordered some and made a dress.