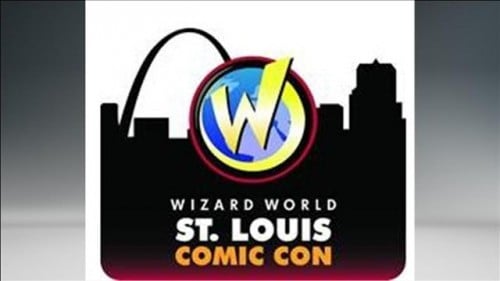 As you can infer from the title, I recently attended my very first comic convention. It was the St. Louis Wizard World Comic Con, and it was this past weekend. And it was awesome!

First, as I was expecting, I spent way too much money. And the ATMs that littered the showroom floor didn’t help at all. But I have no regrets. None. 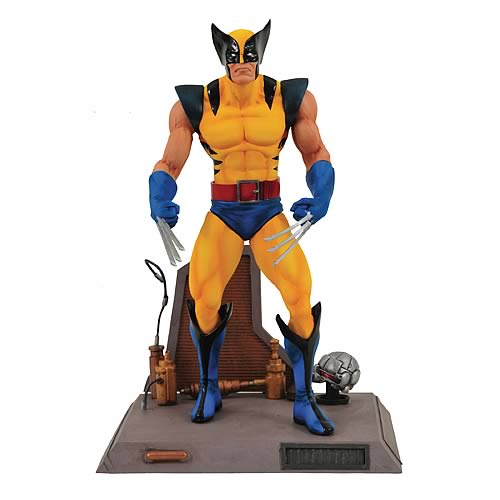 All I have to say is that 1.) It’s a good thing I don’t have a credit card, and 2.) It’s a great thing it was close to my birthday. If I had had a credit card, I wouldn’t have it anymore. And, my fiancée was more than willing to indulge me in my fiscal irresponsibility and even contribute to my frivolous consumerist fangirling I did at all the cool shit around me.

Needless to say, I walked away with some pretty neat stuff, including a badass Wolverine action figure and maybe one or two sets Pokémon figurines. Plus free comics, great artwork, and lots of photographs. I’ll get into that all later.

It was unreal. To those of you who’ve been to San Diego, Chicago, or New York, the St. Louis Comic Con may not be much, but for me, it was surreal. It seemed like there were infinite rows of tables filled with all the things I’d ever want to own. Figurines, art, clothes, etc. It was truly amazing, and I can’t do it justice with words (even though that’s kind of my job). 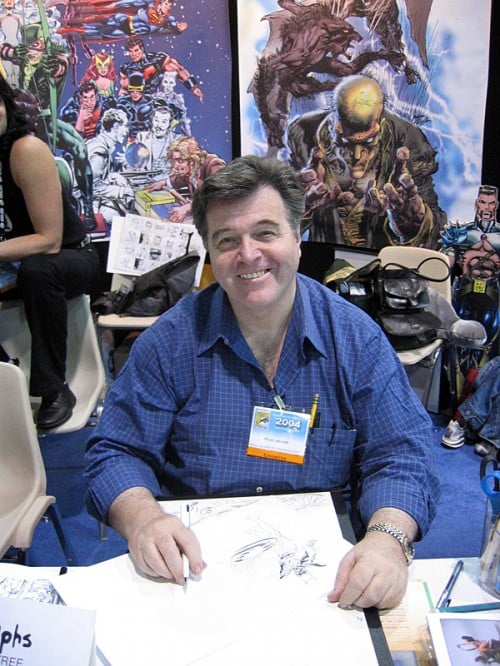 I used to think I could draw pretty well. And, for all intents and purposes, I could. I was better than a lot of my friends. But then when I was exposed to that Internet thing, I learned that people can just “doodle” portrait-like images with a handful of colored pencils and call it “messing around.” Screw those people and their godlike talent.

I envy them so much.

I wanted to purchase every piece of art from every artist there. It ranged from accurate and faithful drawings of popular heroes to chibi Deadpool cooking to zombie everything. It was awesome in the truest, purest, sense of the word.

I was fortunate to overhear a fan ask an artist if all of it was done by hand, and the artist responded, “Well, I used a ruler for a straight edge. And I think that circle there was a shot glass.” There is so much talent in the world, and I got an overwhelming dose of it this weekend. I felt guilty enjoying looking at it without tipping. Like it was a strip club or something. 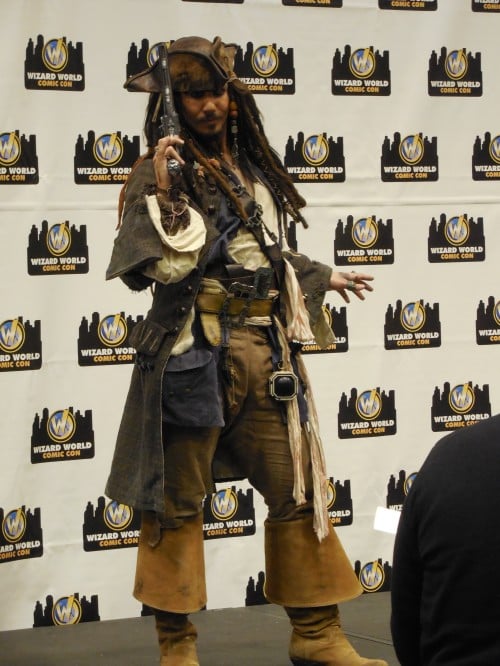 Cosplaying is an art in and of itself. It’s amazing the things people can just make. Not buy—make. I sat in on a panel discussion about cosplaying, and the time and money that goes into making a good and accurate costume is ridiculous.

Among my favorites were a realistic Batman, a legit Iron Man complete with glowing eyes, chest, and palms, and a Captain Jack Sparrow cosplayer who, I swear to god, was Johnny Depp. Until he talked. He had the costume down, the mannerisms, the make-up. He was perfect except for the voice. The accent was good, but he didn’t sound like Depp. He ended up winning the adult costume contest. 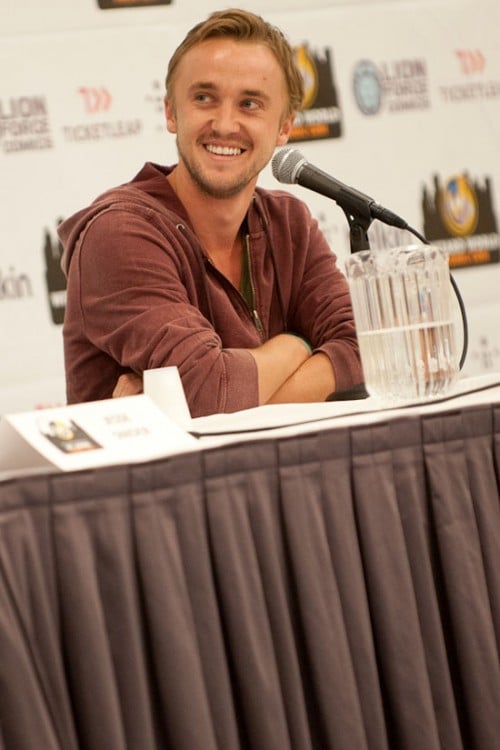 I had the privilege of seeing, meeting, and speaking to a handful of celebrities at this thing. I saw Lou Ferrigno (Hulk) and got an (illegal) picture of Henry Winkler (Fonzie). But I actually got to shake hands with and get autographs from Jason David Frank (the original green and white Power Rangers), James Marsters (Spike from Buffy, Piccolo in the live action Dragon Ball movie), and Tom Felton (Draco Malfoy).

They were all very personable and talkative. Marsters held up his line, spending two or three minutes talking to each fan. Felton’s line had dwindled by the time we got there, and he talked to us for several minutes. Frank was really energetic and upbeat, making us chant “Dragon Zord” repeatedly to “wake everyone up.” He said he wanted us to be so loud that Lou Ferrigno could hear us, but we were warned not to make him angry. Because we wouldn’t like him when he’s angry. Because he’s the Hulk. 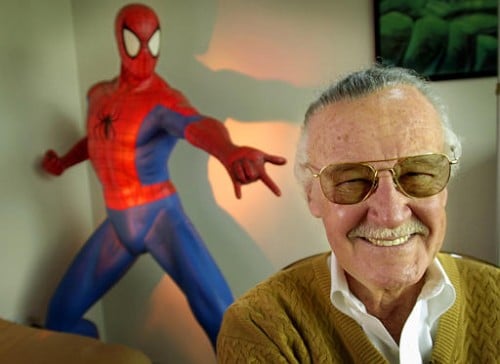 Yes, I could have included Stan Lee under the previous section, but that wouldn’t do him justice, not that I’m claiming I can do that now.

We were second in line for registration—behind all the people who paid a shit ton of money to be VIPs. Then, we managed to get into the first line for entry into the showroom. After all of that, we got in line to meet Stan Lee and get his autograph. We waited maybe twenty minutes in that line before standing before the man.

It happened so fast. I was standing there, in front of someone I never ever thought I’d meet in real life because he’s Stan Lee, and also he’s 90. I had to say something, so I asked him how he was. Whether he just didn’t hear me (we were informed that he was hard of hearing—because he’s 90) or he just didn’t care doesn’t really matter to me. He finished signing our book, spun it around, pointed at his signature, looked up at us and said, “Isn’t that beautiful?” “Yes, sir, it is!” was all I could say back before I was on my way and wondering if that had all really happened.

Stan Lee’s Q&A was by far the most entertaining one I attended. When one guy compared the X-Men to a novel that was suspiciously similar to and predated the X-Men, Stan Lee smiled and said, “Can I sue them?” Ten minutes later, a fan asked, “Mr. Lee, how did you get the idea for the X-Men?” And Stan Lee responded, “From that book that guy was talking about earlier.”

He is a hilarious old man. When asked about what he likes to do to relax, he said, “When I do relax, I sit down and have a drink with my wife and just tell her how wonderful I am.”

I was crying. From laughing and sheer joy.

My life is complete.

Glen Miller received his B.F.A. in creative writing from the University of Evansville. His work has appeared in the 2011 issue of The Ohio River Review as well as on humor website Cracked.com and multi-media website Unrealitymag.com. He served as a co-editor of The Ohio River Review in 2012 and as a copyeditor for Crescent Magazine from 2011-2012.

He is currently a weekly contributor to Unrealitymag.com. When he isn’t slaving over a hot keyboard, he’s either making pizzas at Turoni’s or handling boxes at AmeriQual.

Glen currently lives in Evansville, IN, with his pet computer.

When a seller is ready to prepare their home for a sale they tend to go the extra mile.  Some cleaning here, a little redecorating there can go a long way in attractive potential buyers. …

I had to try this out for myself.  And yes, there is a dating site for Muslim Matrimonials that actually produces this kind of a search result.  You would have to think that there are…

So there’s this book called Jonathan Strange & Mr Norrell, written by a woman named Susanna Clarke. You should read it. Like, as soon as possible.* This book is a no-joke classic, the BBC is…

We haven’t done an “office” post in a while.  I remember a few months ago we hit a pretty cool splurge of posts that featured pictures of offices from the likes of Google, Facebook, Twitter,…

Si apparently Japan’s military isn’t all that busy these days?  I suppose this is one way to spend the taxpayers money right?  This sculpture was built over the course of a month by the 11th…