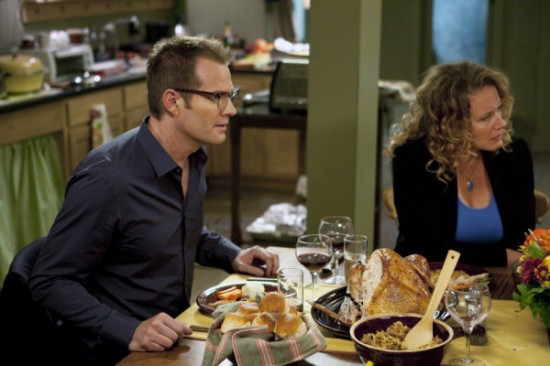 Heroes is well aware of Turkey Day lurking just a few days away (I can’t wait to gorge myself and not work), as evidenced by last night’s appropriately titled episode, “Thanksgiving.”  The Bennett clan got back together for an awkward dinner, but if you’re like me, you were more interested in just where Sylar’s consciousness ended up – was it back inside his old and Nathan’s current body, or, like some of you have speculated, did he wind up inside Peter?  Keep reading to for the full review.  As always, there will be spoilers. 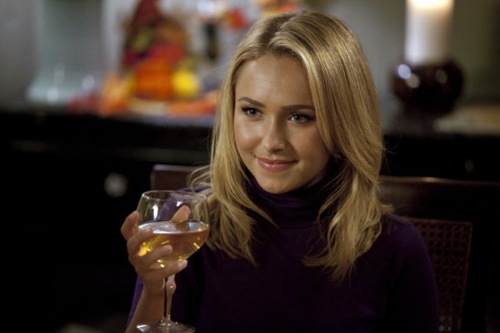 In each storyline this week, the characters celebrate Thanksgiving.  Claire celebrates with Noah, her mother, and her mother’s new pathetic dog-breeding boyfriend.  Noah brings along a date, a co-worker from his days at Primatech. It turns out that Noah was stalking her in the grocery store, but nobody seems to really have a problem with that.  The dinner itself wasn’t excruciatingly painful to watch, but it was easily the weakest part of this episode.  What was painful to watch, though, was Claire’s mom’s cartoon character boyfriend.  I know that he’s supposed to be unlikeable, but he didn’t have to be written as such an unmitigated nancy.  Anyway, Claire tells the table that she’s thinking about dropping out of college.  Her parents yell at her and her mother’s boyfriend embarks on a ridiculous monologue, prompting Claire to dig into her own arm with a carving knife.  The mom’s boyfriend subsequently faints. Of course he does.

I was hoping Claire would have stabbed the mother’s boyfriend, but no dice.  And she totally could have gotten away with it.  Noah wouldn’t say shit and would make sure no one else would, either.  Employ the Haitian if necessary. 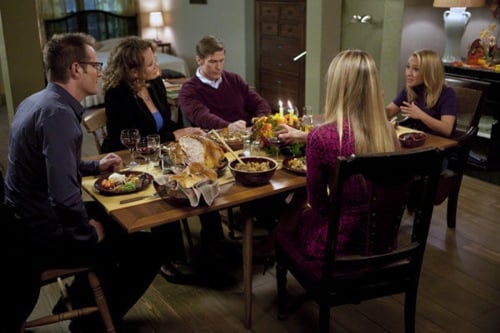 After dinner, Gretchen arrives and surprises Claire.  And then, in typical Claire fashion, she goes ahead and makes yet another poor decision.  Claire was rambling to Gretchen about making her own choices, but Jesus, her judgment is awful.  Oh, so what’d she do?  Stole the compass from Noah before setting off with Gretchen to find Samuel.  Noah should just have the Haitian completely wipe Claire’s mind at this point.  The whole thing.

Meanwhile at the carnival, Hiro’s frustrated that Samuel still hasn’t given him Charlie, and so he confides in Lydia.  Lydia demonstrates her power – which has what to do with showing images of people on her back with the aid of ink? – and by having Hiro touch her, she’s able to “feel” what he feels.  Thus, thanks to her power, she’s able to learn everything that Hiro knows.  (Or maybe thanks to convenient writing?  How else to get Lydia all caught up with Hiro). 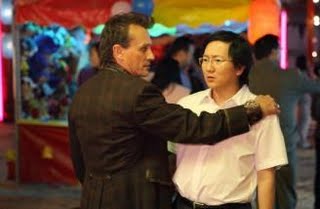 Hiro and Lydia travel back in time eight weeks and instead choose to follow Samuel to a field where he has a conversation with his brother, Joseph.  How on earth Hiro is still traveling back in time after all the damage he’s caused is beyond me.   After some sneaking around, Hiro and Lydia (and we) learn that – wow! – it was Samuel that killed Joseph.  I always kind of assumed that was the case, so I didn’t find the big reveal too surprising.  Either way, Samuel fired a stone through his brother’s throat because Joseph had called the government to watch over Samuel.  Samuel’s power is too great to be left unchecked, according to Joseph, as he is potentially capable of killing millions of people.  We saw Samuel watch the tape in the present, during the beginning of this episode, so he knows exactly how powerful he can become.  It’ll be interesting to see how they take him down.

Later, during the carnival’s Thanksgiving feast, Edgar calls out Samuel for murdering Joseph.  Samuel basically employs the “you smelt it, you dealt it” defense, and accuses Edgar of doing the same.  Hiro intervenes so that Samuel doesn’t kill Edgar, and Edgar goes running off into apparent exile.

Finally, Angela, Peter, and Nathan/Sylar have Thanksgiving dinner together in an empty apartment after some very impressive manipulating and guilt-tripping by Angela.  Peter and Nathan demand to know the truth, and so Angela comes clean about the whole Parkman plot and, as she is without a doubt used to doing by now, asks for forgiveness.  Soon enough, though, Sylar emerges amid a lightning display.  I have to say, it’s great to have him back and ready to kill.  Using telekinesis, Sylar pins Peter and Angela to their seats, but before he can finish carving Angela’s head, the parts of Nathan that still remain mange to “fend him off.”  Nathan flies off into the night, and Peter vows to stop Sylar for re-emerging.  I’m not positive, but I think the actor who plays Nathan – Adrian Pasdar – is leaving the show, meaning it’ll be Sylar who stays.

What did you guys think?  Happy to see Sylar come back, even if only for a moment? 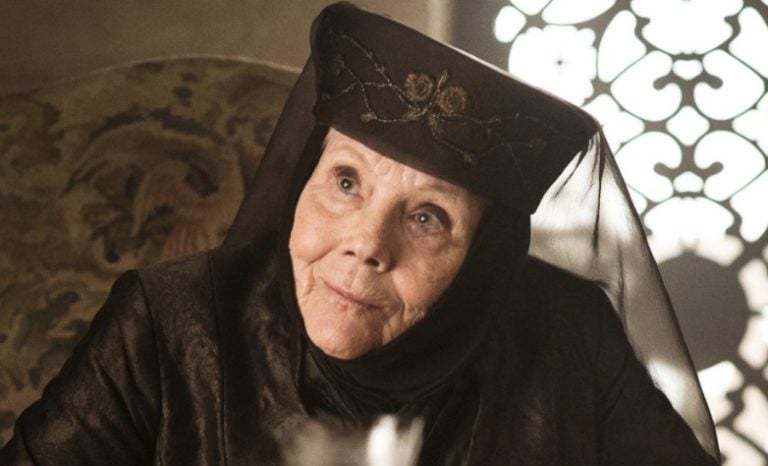 There are many fantastic storylines and scenes from television in 2017 that are memorable. They are what kept viewers tuned in to their favorite TV shows throughout the year. One variety of storyline that has…

Well, despite Time Warner Cable and CBS’s best efforts, I managed to watch Dexter last night even though Showtime no longer existed in my channel lineup. I won’t say how, but I’ll give you a…

Believe it or not, the Entourage movie is actually coming together. There are many “killed too soon” TV shows that promise a feature film resolution, but somehow, someway, Entourage has jumped the line, despite existing…

It’s hard to believe that there has only been 6 episodes of Ripper Street season 3 so far as so many major events have occured. We have had Susan descending into a corrupt political life… 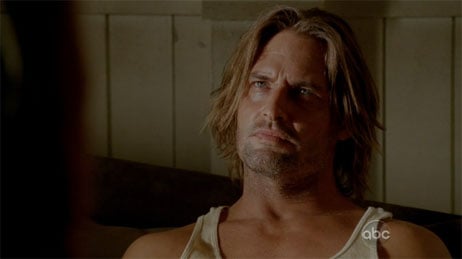 Because it seems we can’t have a season of Lost anymore without splitting the cast in half like its Heroes, this week we focused on the survivors on the other half of the island, away…