Shows are often and quickly thrown in the trash heap after under-performing because … well …  networks want ratings and they want’em now! And it’s unfortunate that the quality shows aren’t given enough time to find their audience because sometimes that’s what they need: time. But what’s done is done and there’s a 99% chance that they won’t be coming back, so I guess we should all move on.

But are these great shows worth watching even if they are canceled after one season?! Well, my answer to that is mostly yes! Especially the following lesser-known series that I have listed below! 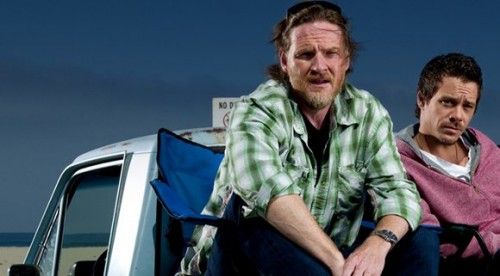 (YouTube has virtually no clips for this show, so check out the first, amazing scene here)

Incredibly acted and absurdly clever, Terriers is by far one of my favorite TV series of all time and it’s one of those rare occurrences where I can say, with confidence, that everyone that gives it a chance will love it. The show stars Donal Logue (as Hank, a former disgraced police officer) and Michael Raymond-James (as Britt, a former thief) and without a doubt they become two of the most likable leads in television history. The story has these down-on-their-luck guys form an unlikely friendship by becoming two very competent private detectives who take on cases which seem simple at first, but then always turn out to be something much more than they bargained for. The show also has a very intriguing (and in the end disturbing) main story that spreads throughout the 10 episode run. When the big mystery is finally solved, it has a fantastic pay-off!

What makes this show so unique and great is mainly the chemistry between the engagingly flawed leads: Hank and Britt. Every interaction they have will either bring a huge grin to your face or will strain your heart. The show is also incredibly funny with its phenomenal writing; though it is a serious drama at its core.

Unfortunately, its life was cut way too short as it only had a one season, ten episode run. Many say it was the confusing/misleading title of the show that translated into bad ratings and others say it was the poor marketing by FX. Some even say that FX just abandoned the show, never really giving it a chance. Regardless, television series like these just don’t seem to have any luck with networks. For what it’s worth though, the show ended on a very satisfying note and it really could be viewed as a one-off mini-series. In conclusion: You really need to check Terriers out!

Note: You will probably be hooked just by watching the super-catchy intro alone:

How right was I?!

I usually stay away from police procedurals, but the unique feeling and setting Shawn Ryan’s Chicago Code had me hooked from the first episode.  So, what is the show all about? Well, it follows the battle between an honest police superintendent, Teresa Colvin and a corrupt Alderman (i.e. a member of a municipal council) named Gibbons, as she tries to prove that the likable Gibbons is tied criminal activity. At the center of everything is Jarek Wysocki, the most honest (but toughest!) cop on the entire Chicago police force. With mutual goals in mind, Teresa and Jarek decide to partner together in order to clean up the city and to bring down Gibbons.

Along with its great acting, the show is wonderfully shot and written. The beautiful Chicago setting is also a nice change from the usual generic big city backdrop, which usually plagues the police procedural dramas. Additionally, like Terriers, it has a very catchy intro. Not that those things really matter in the end, but it’s a nice touch for a great show.

Alas, this was another series that was canceled after one season because, well, it’s Fox and we all know Fox gives their new series only half a season to find their footing and audience. The good news is that there is closure at the end of it all. It’s definitely worth watching the 13 episode run.

Journeyman is a show that just seemed to pass through audiences unnoticed as its ratings were very poor despite being a very compelling concept. But I was able to catch it since I do pretty heavy research during the pilot season. The show centers around a newspaper reporter Dan Vasser (a very likable guy played by Kevin McKidd), who lives with his wife Katie and young son Zack in San Francisco. For unknown reasons, Dan suddenly begins “jumping” backward in time randomly and unwillingly. He soon figures out that the series of jumps follows the life of a person whose destiny he seems to have to change for the better.

The show lasted only 13 episodes beginning in the Fall of 2007, but was officially canceled by April of 2008. All 13 episodes are available on Hulu, so you should definitely check it out! Again, if you’re concerned about closure, don’t worry! Although there are some questions left answered, the last episode does not end with a cliffhanger.

I only now just realized that Last Resort makes  Shawn Ryan’s third show on my list, which makes me pretty bummed. The man knows how to make quality and compelling television, but unfortunately that doesn’t seem to necessarily translate well into good ratings. To make things worse for the man, his TV iteration of Beverly Hills Cop–which was a shoe-in for a pilot pick-up earlier this year–was recently was canned. Funny how the industry works, huh?

Anyway, back to Last Resort! The premise of the show itself seemed a bit far-fetched, but it was really fun to watch:  As the USS Colorado (an American Sub) picks up several Navy SEALs off the Pakistani coast, they receive an order to launch a nuclear attack on Pakistan. Due to the odd circumstances of the order, the Captain refuses to fire. After escaping an attack from another American submarine, the crew of the Colorado, along with the SEALs, take refuge on a small island, claiming it as their own nuclear, independent nation.

Sounds crazy, huh? Well it is! However, it’s fun, well acted, full of mystery and it had so much potential to expand on the show’s mythos. I would have loved to see at least a few more seasons to see where it went! But, like the others on the list, it was canceled because it wasn’t allowed to find its footing. Interestingly enough, it did very well in the male demographic, but virtually no one from the female side watched it. This apparently concerned the network enough to can it. Sadly it didn’t have as much closure as the other shows did on this list; it seemed very rushed in the last episode. They did conclude most of the major story lines, but they only had a short amount of time to amend the last episode.

That being said, it is definitely worth watching the 13 episodes.

httpv://www.youtube.com/watch?v=dCiageqMHJc This may be the shortest video we’ve ever posted on Unreality, clocking in at a mere nine seconds long, but it’s also one of the best. It’s from the documentary “I Trust You To…

Sick of my Newsroom posts yet?  Well, this will be the last one. The Newsroom is over.  It’s going to take some time to come to grips with the series as a whole; for right…

For anyone who has been following Game of Thrones since the beginning, it’s obvious that last night’s episode was meant to be a sequel of sorts of season two’s famous “Blackwater,” the massive battle at…

To an outsider looking in on Fox’s Sunday night lineup, it could look like really lazy television to some people. Three shows, all back-to-back, that seem like they could be stand in’s for one another….

httpv://www.youtube.com/watch?v=6FcspYEOo1I This sounded like an OK concept for a sketch, a superhero dating service, but when put into practice this is actually an incredibly funny video. It’s a spoof on eHarmony (obviously), with superheroes and…