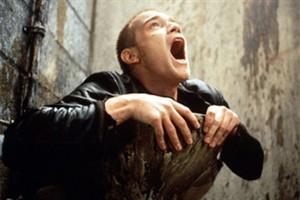 If there’s one thing we’ve all learned in the last five years it’s that annoying remakes and sequels suck, period.  I’m not sure how much they take away from the originals, but you can’t deny that they add a bit of taint that’s for sure.

I can’t imagine more taint than if Trainspotting did a sequel.  And I guess Ewan McGregor feels the same way.

Ewan McGregor is holding up the sequel to the movie that made him famous, because film bosses don’t want to go ahead without his participation.

McGregor snubbed the picture earlier this year, insisting he didn’t want to be part of a “poor sequel”, and, as a result, filming has stalled.

Remember folks, this is a movie about heroin addiction and became an indy classic in about 2 seconds.  What the hell sequel is there going to be?  Seeing Ewan go back into an abyss of drugs and get chased down by Sickboy and Begbie?  Not to mention we’d have to deal with trying to decipher Robert Carlysle’s obscene Scottish accent again.

But seriously, granted Danny Boyle is certainly a good director and probably has the skills to pull it off,  some films just shouldn’t continue.   I believe that Trainspotting qualifies as one of these films.

Put your efforts into something new.  I loved Trainspotting and would hate to see it have some kind of an evil stepbrother.

Some people seek therapy.  Some people seek alcohol.  Others turn to crime.  This man falls under “none of the above.”  In 1999, for whatever reason (something tells me his obsession with Star Trek) his wife…

I think the car up top might be one of the coolest car mods I’ve ever seen.   Although (and maybe I’m just in that kind of mood today) it looks extremely phallic does it…

Must be nice to be the guy who created Minecraft eh?  And in case you’re wondering who now owns this $17 Million Beverly Hills mansion, it’s Swedish programmer Markus Persson.  While he’s known as the…

The Internet is like a giant brain. The people using it are the neurons, firing often stupid and useless information around at the speed of light. Your Facebook and Twitter feeds give you a teeny,…

by Ed Lee Science fiction is the passion of millions of people around the world.  As such, it deserves to be celebrated, and I’d like to draw your attention to the people, places, and events…

httpv://www.youtube.com/watch?v=r_aqQhHn0fA Ever since the death of the space shuttle program, it seemed that the US’s dreams of space travel were now put on hold indefinitely. We have too many wars to fight, too much health…