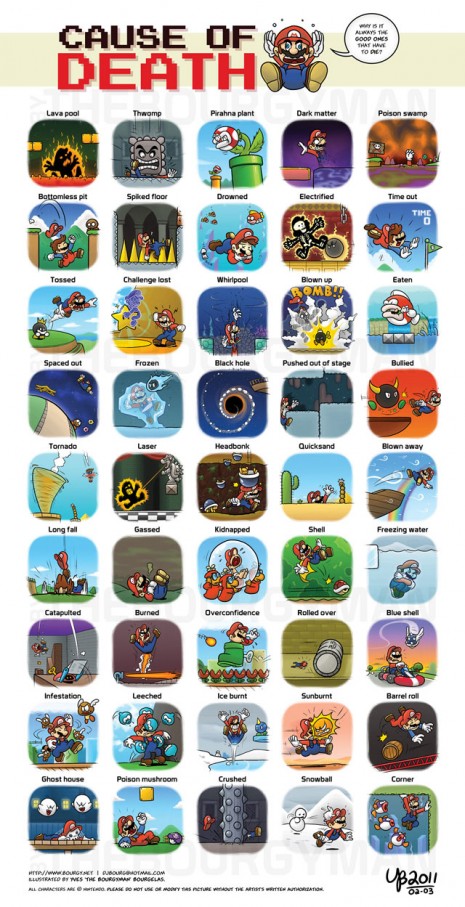 In his ongoing effort to rescue Princess Peach in practically every game he’s ever been in, Mario has encountered a lot of dangers, and lost a hell of a lot of lives to them.

Artist Yves Bourgelas decided to sit down and try to chronicle every single way Mario could die in every title in this humorously morbid piece. Mario goes through some awful stuff, like being burned by lava or eaten by leeches or skewered on spikes, but it also shows he’s pretty fragile, as he falls victim to snowballs, barrels and shells as well.

Did he miss any?

“Careful, before you know it, all kids enter the Temple of Time.” Bonus adorableness after the jump:

Can’t we all just get along?  I understand that console fanboyism is rampant these days, but as games move closer and close to digital distribution, and exclusive titles are becoming a thing of the past,…

(click to enlarge) Though on the surface, The Legend of Zelda series would seem to be one of the most creative in all of video gaming, there are certain “threads” that run through all of…

(click to enlarge) Everyone credits Ken Levine with the genius that is BioShock Infinite, but he’s not the only one responsible for the title. Rather, the game owes its success to the work of hundreds,…

I guess a person will always be loyal to the game system that have the fondest memories of.  And that usually has something to do with their youth. For me?  It’s clearly the Nintendo Entertainment…

“The horror, the horror” It’s a phrase that’s stuck with me ever since I first read Joseph Conrad’s Heart of Darkness, and then saw its subsequent film adaptation, Francis Ford Coppola’s Apocalypse Now. Here, it…