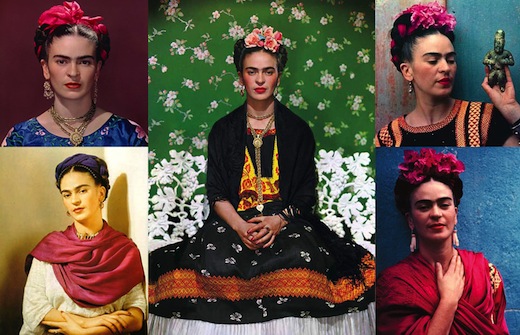 Last year I wrote up a list of 8 Cute and Refreshingly Non-Slutty Ladies Costumes which continues to be fairly popular on the interwebz. I’ve even spotted it in the wilds of Pinterest and the ol’ book of face, reposted by people who I don’t even know. Be still, my beating heart!

Nearly the whole of October has gone by and I’ve yet to write anything about Halloween, my absolute favorite holiday of all time, so I thought I’d pull together another list of totally awesome costume choices. Like those in last year’s post, they’re all fun and/or beautiful, and not a one of them could be mistaken for clubwear. 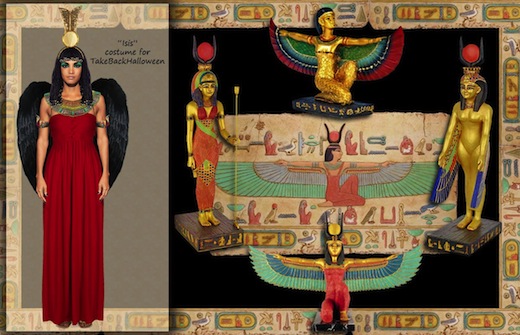 This year I’ve decided to focus entirely on Take Back Halloween, the people behind the fantastic Isis costume featured in my previous post. By the way, I just want to let you all know my 2013 dibs on Isis has been released. My coworkers decided to go with a Star Wars theme instead of the ancient Egyptian one I was pulling for, so I’ll be genderbent Luke Skywalker this year.

I originally wanted to focus on Take Back Halloween because I wanted to direct some traffic towards their Kickstarter, but I see they’ve already overshot their goal. But hey, check out those stretch goals! New costumes for Marie Laveau and Hecate (mmm, I can spin that right into a Hamlet reference and then my journey to the nerd side will be complete), plus two more wildcards? Yes, please.

I’ve picked five of my favorite Take Back Halloween costumes to share, and I’ve included a paragraph’s worth of the incredibly well-researched descriptions for each. Click on the pictures (including Frida Kahlo up there in the header) to go to the appropriate page on TBH, where you’ll find instructions on how to create your own version. That reminds me: another thing I love about this website? No sewing required. 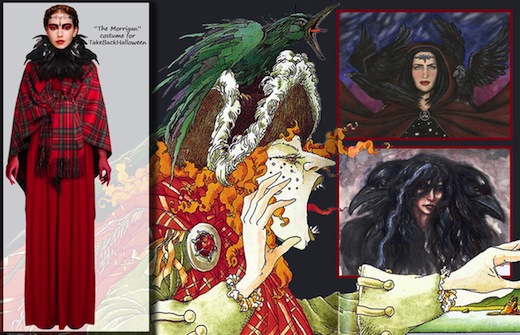 “Of all the great bird goddesses in world mythology, the Morrigan is surely one of the birdiest. This Irish goddess typically appears as a crow or raven hovering over the battlefield, feasting on the corpses of the slain. She’s a carrion bird, basically; the Celts, like their Germanic neighbors, saw these birds as she-demons or goddesses who conducted fallen warriors to the great beyond. Even when the Morrigan appears as a woman, blood and gore aren’t far away: her clothes are red, her eyes are red, her mouth is red. She stands in the ford of the river, washing the bloody clothes and armor of those about to die, up to her elbows in gore.”

Yet another badass bird goddess in red for me to add to the list. I think I need to start scoring invites to fancy dress parties throughout the year. 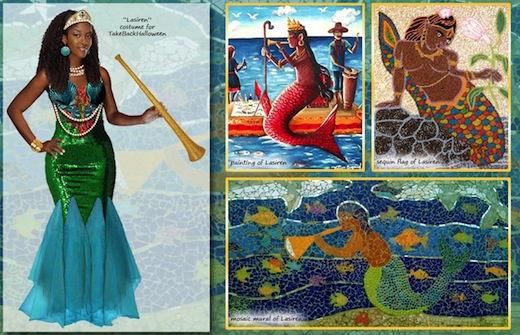 “Lasiren, also spelled La Sirène, is the Haitian mermaid goddess of the sea. Her mythological pedigree is impressive: African slaves brought with them the memory of a great female water spirit, combined it with existing Taino legends about a sea creature, and added European mermaid imagery. The result was La Sirène, the reigning queen of the ocean realm. She wears a golden crown, carries a golden trumpet (to play her siren song), and lives in a fabulous underwater palace that’s crammed with sunken treasure. Lasiren herself is a magical vision of beauty, which is exactly what you’ll be in this outfit.”

Guess who has two thumbs and lives in a city that has an annual Mermaid Parade? This costume would kill it. Though to be fair, my fellow New Yorkers always come correct to the boardwalk. 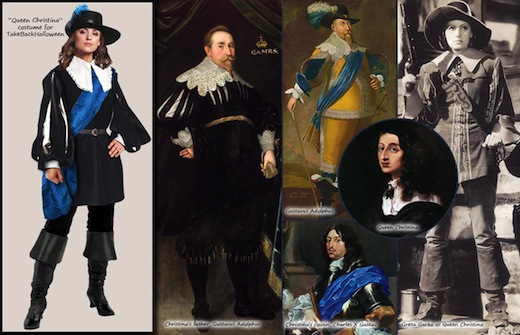 “If you’re unfamiliar with Queen Christina of Sweden (1626-1689), you might wonder why there are so many pictures of men in our main illustration. It’s because Christina liked to dress as a man—not all the time, but often enough that she was famous for it. Unfortunately there are no nice paintings of her in masculine attire, so we’re using images of the men in her life to illustrate contemporary fashion. We’ve also got Greta Garbo for reference, since her star turn in the movie Queen Christina provided an indelible (albeit romanticized) portrait of the queen.”

Where my tomboys at? I can’t be the only girl who was more attracted to men’s clothing when it came to historical garb, right? I love pants. GIVE ME ALL THE PANTS. AND ALSO ALL THE FANCY BOOTS. 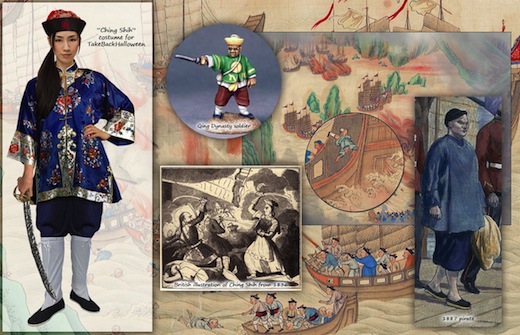 “Ching Shih, or Madame Ching (1775-1844), has been called the most successful pirate in history. For one thing, there was the sheer size of her operation: her Red Flag Fleet consisted of at least 40,000 pirates, with some estimates ranging as high as 80,000. In terms of power, she was unprecedented: the navies of China, Britain, and Portugal all tried to bring her down, and all failed. But perhaps Ching Shih’s greatest success was that, unlike most pirate captains, she got to retire from piracy with her life and treasure intact. When the Chinese authorities realized that they couldn’t defeat her by force of arms, they offered amnesty instead. Ching Shih negotiated an incredibly favorable settlement for herself and her fleet: everybody got full pardons, everybody got to keep their loot, and the officers were given commissions in the Chinese navy. Ching Shih herself retired from the sea with her riches, and spent the rest of her life running a gambling house.”

Slow. Clap. Her character remains one of the best parts of Pirates of the Caribbean: At World’s End, ten seconds of screentime notwithstanding. 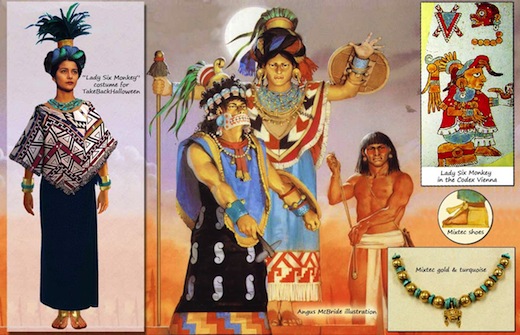 “Lady Six Monkey (11th century) was a Mixtec warrior queen whose story is known from the Mixtec Group Codices. She and her arch nemesis, Lord Eight Deer, loomed large in the legends of Oaxaca for many centuries. (People were named after their birthdates, by the way.) Mixtec society was remarkably gender-equal, and both males and females could inherit the throne. The Spanish were astounded by the high status of Mixtec women; they reported that a Mixtec man would typically defer to his wife as the brains of the family and official spokesperson.”

I think maybe I just want to wear feathers all of the time. Between Lady Six Monkey, the Morrigan, and Isis, all birds would do well to fear me. You hear that, birds? Pretty soon the Hitchcock of your world will be making a movie called The Saras!

Just in case you want to know how this was done.  First of all, Vena and Ivysaur looks really sick and to do the pink the artists used Fairy Energy.   Apparently that’s a thing now. …

This infographic and poster series by Charley Chartwell will tell you everything you need to know to make a good super hero, including alter ego’s, house hold items that might come in handy and of course, a…

It’s 2017. We should expect the superhero universe acts as a major influence on the tech world, yet it still comes as a surprise to think Mark Zuckerberg lives in a house equipped with his…

I’m as big a fan of LOST as anyone out there.   And as much as I loved the finale and as much as I believe in the seriousness of the show, you can deny… 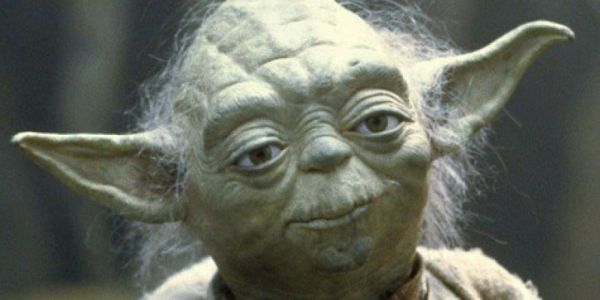 Old men have big ears, is the consensus of several medical studies on the question. The most celebrated work focused exclusively on men, in accordance with British male doctordom’s smug tradition of showing interest mainly…

I’m surprised that given the rise in gaming there hasn’t really been too many television shows that center on the gaming industry.  I mean the only real “geeky” commercially successful show out there is The…