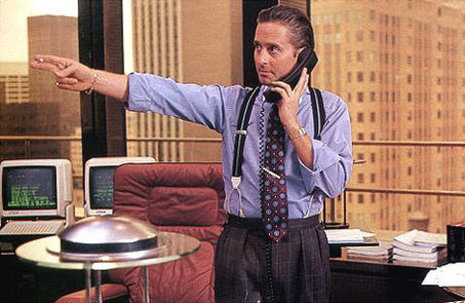 Gold is at $9 per million; Sell Sell Sell!

Blizzard released its Real Money Auction Hall for Diablo 3 this week, and while most are discussing its importance to Blizzard and Diablo’s monetization I’ve been spending my time figuring out how to say RMAH out loud. I think I’ve settled on ‘Erma.’ Anyways, I was skeptical at first, but after seeing some $250 auctions disappear I decided to dig in to see if it was an isolated incident or a true-blue money making opportunity for those willing to put the time in.

There was a thread on Reddit yesterday where people were posting successful RMAH sales and this lucky player managed to sell over $700 bucks worth of in-game gear. Some of this can be attributed to overzealous first day excitement, and I doubt it will last long, but man do I wish I spent more time grinding my way through Inferno over the last couple of weeks. Now you can make money playing Diablo 3? As if I needed another reason to convince myself to stay awake for “5 more minutes” every night.

I already hated those damn flies in Act 2 Inferno, the ones that shoot those smaller poison flies. I’ve spent my fair share of time cursing them while repairing my gear for the tenth time. Now however, I despise them, they’re not just halting my progress through Act 2; they’re slowing me down from getting gear I could potentially sell for real cash. How silly. My buddy will call my tomorrow and ask “Are you going out this weekend Dude?” and I’ll reply with “Well I would, but since these flies won’t let me get into Acts 3 and 4 where all of the good loot is, I can’t afford to go out this weekend.” To which my friend will reply by deleting my number. 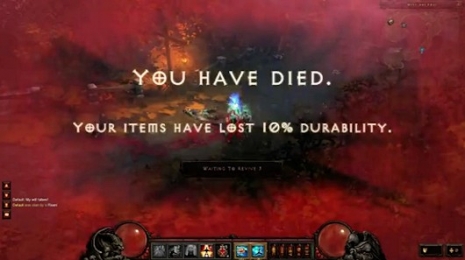 When you put real money on the line in a game, all sorts of game related problems can quickly turn into real life money problems for the community. I began to look into how all of this worked and was surprised to learn how much people were willing to pay for things and how gold sellers have affected prices. With a little math and some rudimentary detective work I tried to figure out how this new RMAH really works.

Where do these prices come from?

This is an important question, and there’s actually a neat little economics lesson in here if I can do it justice. My economics experience comes from my very early morning Econ 101 class roughly 8 years ago, so this should be interesting.

First, before I mention anything I should mention this. As we’ve seen with our real economy sometimes the buzz over a new product or service creates a temporary inflation of phony value. Not to say that some people can’t make money during this time period as the stories I linked earlier from Reddit have shown. But overall I would say that there is an enormous amount of overvalued items floating around. There are a lot of sellers just throwing stuff on the RMAH for the maximum amount allowed ($250). So take everything I’m about to say with a grain of salt. 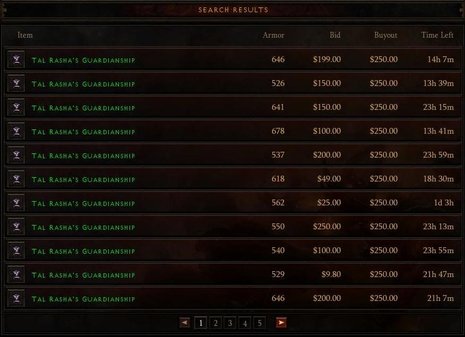 No thanks, I think i’ll browse.

This morning I was spammed with an offer of ‘1000K for $9 US,” so a million gold for nine bucks. Normally this would be a mere annoyance for me, and for Blizzard; I don’t like spam and Blizzard doesn’t want a third party ruining the integrity of their game’s economy. But with the addition of the RMAH in Diablo 3 gold farmers aren’t just a minor economic annoyance, they’re helping set prices. I doesn’t help that Blizzard can’t seem to come up with a solution to get rid of their in-game spam, and that the RMAH was delayed for a month, giving gold farmers an opportunity to set prices before anyone else.

So how do gold farmers influence current prices? Well, if gold is valued at “1000K for $9” that technically means that any item worth 1 million gold is valued at $9, to them at least. So while I’m more than entitled to try and sell it for the maximum, there is no point in selling it for less than that. I mean you could, if you really wanted to get rid of an item, but there is no point in selling an item for $4 when the 1 million gold its worth could sell for $9 on the RMAH. On the other side of the coin, spending $250 on an item is silly when you can just buy a few million gold and head over to the normal auction hall to grab it there. Currently gold can only be purchased with real cash through gold sellers, as Blizzard has temporarily disabled the sale of gold and other commodities. So while most of us won’t or can’t purchase gold to buy an item, the fact that some will and can effects the entire economic system.

Tal Rasha’s Guardianship sells on the gold AH for a minimum of roughly 450,000 gold. 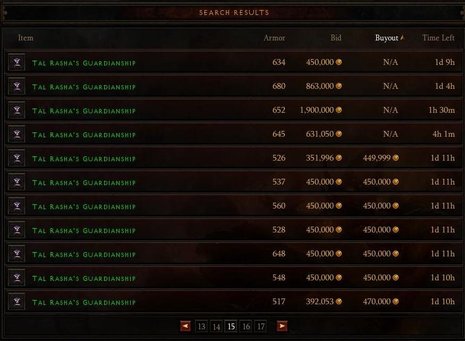 This is the community’s accepted minimum value for this item; 450,000 gold.  According to our gold sellers “1000k for $9” rate, the real world cash value of this item would be $4.05 (I’ll show my math at the end). So, if $4.05 is the minimum shady black-market rate, then the legitimate minimum rate in the approved RMAH should be slightly higher, shouldn’t it? 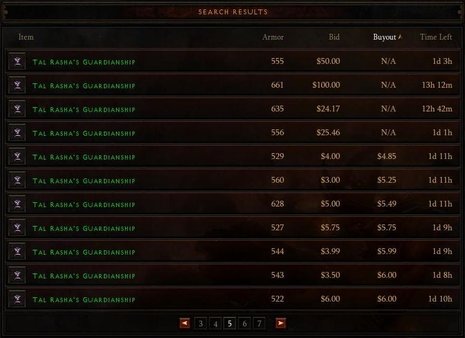 It turns out it should, and it is. Legitimately the piece is listed at $4.85 (at the time this was written) which is pretty close to the $4.05 I gave using the gold seller’s rate, yet still above shady black market rate. In this case, you can see that gold sellers have, in some cases, established a minimum black market value on certain goods. This has given legitimate sellers a frame of reference when setting prices at the very least.

They may not specifically be setting prices, but gold sellers have given Diablo 3’s gold a minimum real world value, which currently hovers around 9 bucks for a million gold. This isn’t a hard rule, economics is complicated (i.e. I’m not that good at it), and prices are still fluctuating, but it appears that illegal gold sellers have, in some part, helped to value a fictional and ambiguous gold currency into real cash. Even if you never do business with a gold seller, they’re still helping to shape the game’s economy. If Blizzard had been there on day one with the RMAH then gold prices could have been set entirely by the community, but since it wasn’t, third parties stepped in to fill the void.

This is all theory of course, some people will pay drastically more in gold than in real world currency, some won’t do any research before putting up an auction, and most won’t do business with gold sellers, so there are a lot of variables to consider.  I’m not saying that gold seller prices are responsible for creating a 1-to-1 exchange rate, but they’re almost certainly influencing it. As long as there are those who are willing to do business with gold sellers their prices will affect the rest of the economy. This may not necessarily be a good or bad thing entirely, but since I’m not an economist we’ll have to wait and see what happens next.

Also as promised, my math explained;

You can then multiply this rate to any gold amount to come up with the dollar value. The example I used is as follows;

It’s pretty straight forward, and it only works for this one rate so it most likely isn’t accurate across the board, but does show that gold to dollar values kind of all hover slightly above the gold seller rate.