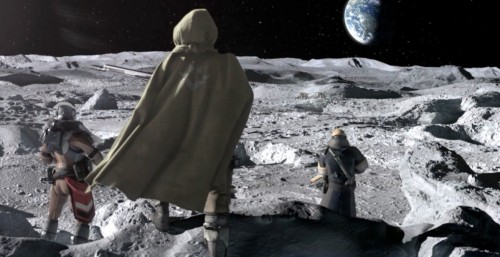 “Pretentious” is a word thrown around an awful lot these days. Usually it seems to find itself attached to movies with lofty philosophical ambitions, like Tree of Life, or The Seventh Seal.

On a more day-to-day basis, a lot of criticism that aims to deal with more than the surface-level qualities of a given work will get slapped with the label, too. Presumably, this phenomenon will demonstrate itself in the comments shortly.

I prefer to use the term, not to describe a work that’s really attempting to dig into an issue, but to describe something that PRETENDS to significance that it absolutely does not have. Its “importance” is an affectation as opposed to an earnest intent.

So now you know what I mean when I say the “Law of the Jungle” ad for Destiny is pretentious as hell.

Let’s start with the obvious question. What is this ad actually selling the game with? I mean, I know that the name recognition carries a lot of weight here, but beyond that? According to the narration, the “Law of the Jungle” has something to do with it. Rudyard Kipling. Nice! I dig me some Kipling. Here’s the out-of-context quote:

…Okay, where exactly is the Law of the Jungle exemplified in here? Other than in the voiceover, I mean. Because all that actually happens in this video is some people shoot at things.

If the advertisement is meant to give some idea of the game’s content, that’s almost literally all that can be gained. “People shoot at things.”

More specifically, people in masks shoot at each other. In the opening, we’re treated to a slow close-up of a character in a mask. Is he a robot? A human? An alien? Doesn’t matter. Good guy? Bad guy? Morally grey drifter? Who cares? “Pay attention,” a voiceover orders. “This is the part of the story that’s really important.” 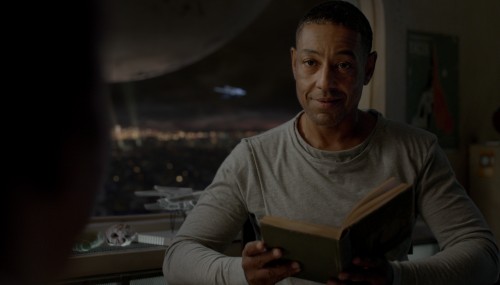 “But you don’t have to take my word for it. Except you totally do.”

In the first segment, the main character (“Mask,” for short) looks down over a group of (presumably) bad things. Robots? Aliens? Who cares. The point is… well, the point is the Law of the Jungle, obviously. Because that’s what the voiceover says.

Suddenly, guns! Mask and his companions (“Mask” and “Mask,” respectively) are surrounded by the Things, and have to fight them. Shots are fired.

I suppose that the Law of the Jungle comes in with the idea that Destiny is going to revolve around team/co-op gameplay, and the video displays that by having three masked people instead of just one. But it’s not like the ad goes to any effort to have them, you know, act like a team.

There’s a second scenario in the back half of the video to underline this idea. 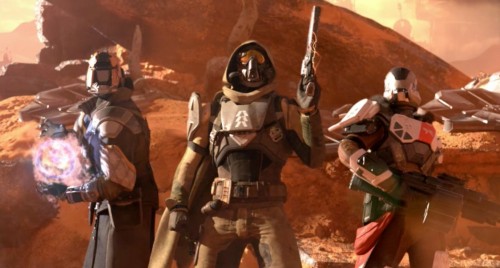 This world’s brown, because variety.

On this arena, things are different. Oh wait, no they aren’t. We’re still treated to nonsensical images of Mask, Mask, and Mask as they stand in one position and shoot Things. Except their victory makes even less sense here, because the Things have shields and guns and superior numbers. Why aren’t the Masks getting shot, again? Seriously, this is bad aim on a scale that Stormtroopers and Bond villains can only dream of.

A clip of exploding pistol rounds later, and the threat is neutralized. There’s no dodging, no fire taken, no cover found, just a totally arrhythmic firing range scene.  Is this supposed to be badass? Tense? Cool? Funny? I have no idea. Probably not funny.

And to close out this totally-not-crappy advertisement for the most hyped game of the year, we have… an even bigger Thing.* It cuts out before we see what happens, but I bet a hundred bucks that the guys in masks shoot at it. 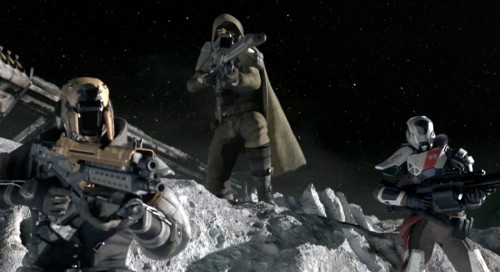 Look, I get that video games make the vast majority of their money by featuring faceless (or at least personality-less) avatars running around shooting things. I’ve shot plenty of things myself, and enjoyed quite a bit of it.

The issue I’m really taking with this advertisement (aside from the boneheaded action choreography) is the tone. This is a video that literally opens by claiming that “this is the part of the story that’s really important.”

Problem is, there isn’t even a friggin’ story in this video. Nor does anything we’re seeing seem “important.” There’s no stakes, no character, no plot, nothing. There aren’t even any discernible battle tactics, group dynamics, or worldbuilding attempts.

It’s not that dumb things can’t be tonally serious. It’s fine for video games to apply the grim ‘n’ gritty veneer, even if the veneer is covering something that’s essentially nothing but a digital firework show. Shoot-em-up games are largely escapist endeavors, and I get that some people prefer their escapism to come with a bit of threat.

Unfortunately, I get the sense that some gamers (or at least game developers) have mistaken that serious veneer for actual serious content.

I’m reminded of that horrible God of War ad. You know, the one that tried to act like that series was about anything other than a series of cartoonish fights punctuated by immature sex fantasies and macho screaming.**

This lack of self-awareness seems to be plaguing the video game industry hard right now. It’s caught in an awkward growth spurt, where gaming narratives are trying to stretch out and compete with the big boys of books and movies while simultaneously meeting the rather base needs of shooting things.

This might just be me, but it seems the narrative restrictions placed on games by the need to constantly shoot things has resulted in a lot of seriousness being wasted on incredibly shallow narratives. Furthermore, it seems that these sorts of trite attempts to be “serious” are acceptable substitutes for story integrity and thematic intent. “Just back it with a Rudyard Kipling quote,” the designers seem to say, as if that’s enough. (I’m sure Kipling would be thrilled that this is his legacy in 2013.)

I’m probably walking on thin ice with this subject. The media crapstorm that hit upon the most recent round of “are video games art?” proved that the community can get extremely defensive about the seriousness of gaming narratives. 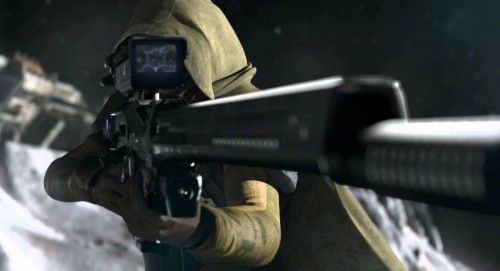 For the record, I think video games absolutely can be works of art. Shadow of the Colossus proved that, as did Journey and a couple of other titles here and there. The interactivity that video games allows is unique, and when harnessed correctly it can lead to some fascinating stuff.

Or maybe this one ad just sucked. In which case I think gamers would do themselves a favor by demanding something a little more refined next time. Because if they don’t, then they’ll assume this one was good enough.

And hopefully the actual game will be a million times better.

*Which… how exactly did that sneak up on these guys?

**Coming from somebody who enjoyed his time spent with the third one, by the way.

***Are they even protagonists, though? There is absolutely nothing given to us. These guys mightn’t even be related to the game’s main narrative, the way this ad uses them. Which would be fine if they in any way indicated tone, plot, world, etc etc…

As much as I loved the Harry Potter series, the ending always felt a bit too…neat to me. Spoiler alert (but come on, read them already, or at least see the movies), the good guys…

We’re big fans of wearable tech.  The things they are doing these days with clothes and their ability to improve one’s life are incredible.  But this latest design borders on creepy but at the same…

Just last week we shared an amazing crib that looked like Jaws eating the baby.  Now it’s time to accessorize for your little toddler or baby.  No more kitties and children’s toys.  It’s time to…

Comiket otherwise known as the Comic Market is the world’s largest self-published comic book fair, held twice a year in Tokyo, Japan. It is a grassroots, DIY effort for selling dojinshi, self-published Japanese works. As…

I’m a little surprised that over the years more hasn’t been done with The Wizard of Oz franchise.  I mean yeah, Wicked is one of the biggest plays of all time but I’m referring to…

There are still a lot of people and fans out there who don’t know what exactly is going on with the rights of certain Marvel characters, and which studios own what characters. To make things…