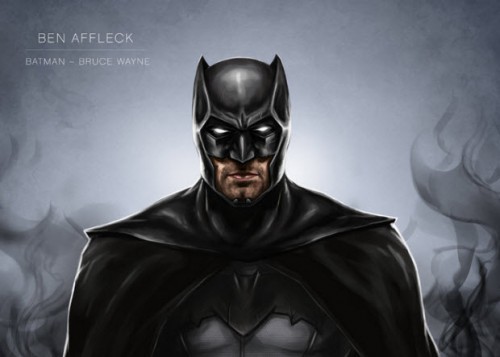 I think we’re all waiting to decide on Ben Affleck as Batman until we see a trailer or at least a costume now, but uber fanboy Seth Green recently talked about the concept with Larry King. In short, he’s not sold on Affleck in the role, and here’s why:

“Modern mainstream is accepting of interpretations of these characters with more gravitas, you know. We’re past the time of Adam West’s kind of goofy interpretation of Batman. You gotta remember that at the core of that character, Batman’s a crazy person. Batman has no powers. Batman is a rich, screwed up kid whose parents were killed in front of him.  If this movie is meant to be the idealistic alien, humans before all else Superman, and this is supposed to be the grizzled weathered Batman who’s been living in Gotham, fighting crime himself for 10 years, you need a guy who’s older, you need a guy who’s got more weight, you need a guy that a Henry Cavill Superman is gonna be actually scared of.”

When pressed that “acting” should solve that problem, he continues.

“Yes, but, there is only so much that you can act a role before people are or are not going to believe you in that role. I’m never going to play, um, you know, an MMA fighter, because I’d step into the ring with an actual MMA fighter like Batista and I wouldn’t look correct.”

I don’t really think Affleck is as far from Batman as Green is from Batista, but I understand what he’s going for. I think Green is assuming that the movie is going to be a fully-fledged recreation of The Dark Knight Returns, where Batman is pushing sixty, and is super grizzled, old and terrifying. While I think they may take some ideas from that book, I don’t think this is going to be a one-to-one translation, so Affleck’s age might work.