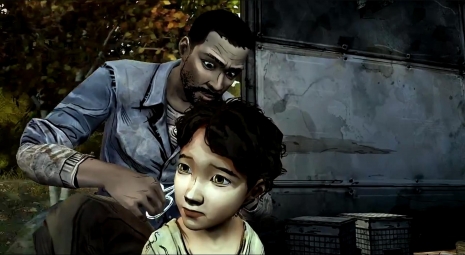 Spoiler alert – this post covers all five episodes and doesn’t pull any punches, you have been warned.

If there’s one scene in all of Telltale’s The Walking Dead game that sums up the main theme of season one, it’s this; Lee giving Clementine a haircut on a speeding freight train bound towards disaster – a useless gesture in the face of almost certain peril. Despite knowing that Savannah is full of walkers and the fact that it could just be a trap, all Lee can do to keep Clementine safe is trim her hair. It represents the game’s cold truth; that there never really was any hope to begin with.

Throughout the game players are given plenty to keep them busy like resolving group conflict, rationing out food, and of course, killing plenty of walkers. At the time it seemed as if each of these were events critical to the group’s survival, that correct decisions regarding these events would keep the group alive. The reality is, however, that no matter how well players perform there are no decisions capable of steering the group away from an early undeath. On a speeding freight train headed towards disaster the best I was able to manage was a sloppy haircut.

The cold reality about all of the choices I made while playing TWD is that they really didn’t do anything, in the end those that were supposed to die did, and there was nothing I could do about it. Choice is an illusion, albeit a good one designed to give players the sense that they are the one’s controlling the story. Though there may have be individual moments that turned out differently or characters that lived a bit longer because of my decisions, the truth is I never really had a chance to save any of them; Larry, Doug, Mark (poor Mark, doomed to turn into a legless walker no matter what I did), Carley, Lilly, Duck, Ben, and Kenny, all of my gut-wrenching decisions did little else than shuffle the misery around more favorably for those I liked. Good or bad, moral or immoral, compassionate or cruel, it seems my choices didn’t matter. Any decision I made would have lead eventually to the same place, a literary bottleneck designed to fit any variation of the story into one concise ending. 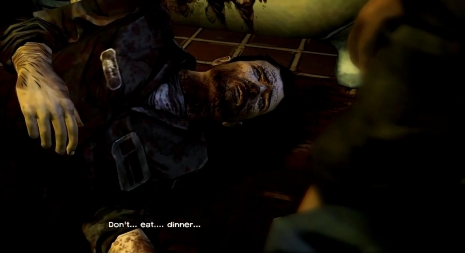 Sorry Mark, you’re screwed no matter what I do.

Yet despite this, despite the fact that my choices as a player had little influence on the overall story, I felt more of a connection with my character and the choices he made than to almost any other video game character in recent memory. So what gives?

Well for starters the lack of both gameplay and plot incentives for my in-game decisions means that all of my choices are based solely on what I think is right. I didn’t give the kids the food first because I was hoping for some sort of in-game reward; I gave the kids the food first because it was the right thing to do. I didn’t try and get along with Kenny because there was an achievement for it; I tried to get along with Kenny because he was the only other person in the group around my age. I made my decisions as a member of the group, not as the player at the keyboard.  Of course this can only work if the characters and the story are well written, robust, and interesting enough to care about.

This is really where the game’s unparalleled voice acting comes into picture. Every character, even the minor ones, feel and act like normal everyday people and not typical video game stereotypes. The dialogue is rough – characters sometimes stumble through their words. They behave in a realistic manner and are believable and consistent. They even adapt to their new apocalyptic surroundings in a much more human fashion than the characters on the TV show. During the first episode their fear was obvious, but eventually the group learned to live with the everyday terrors associated with the end of the world. Those on the TV show, however, spent much more time screaming, wailing, and generally freaking out a ton about the fact that the world had recently ended. If players experience games through the eyes of their characters, Telltale’s characters give players one hell of a pair to look through. 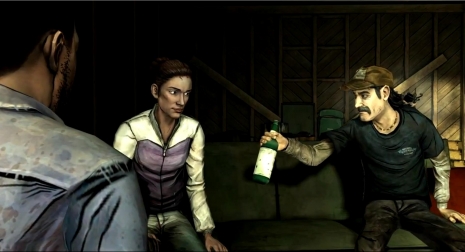 I had begun the story with the impression that it was going to be about Lee. He’s the player’s character, the group’s defacto leader, and most of the action revolves around him. Even his experience with the apocalypse is different than everyone else’s. He was on his way to prison when it all began. For him the apocalypse was the start of a new prison-free life. Compare that to everyone else who seem to all have had their lives shattered, to Kenny whose family was essentially tossed in an undead meat grinder, and it looks like the game is set up for Lee to have some sort of redemption story, becoming the savior he never knew he could be. But there is no redemption for Lee, no salvation, and no point in which he does anything of permanent value for the group. Instead the story goes from what looks like a redemption story about Lee to an origin story about Clementine.

In the end, it’s really all about Clementine. While Lee does get his redemption by keeping her alive throughout the game, the story really is all about her. All of the game’s major plot-lines  the motel, the bandits, the dairy, the train, the boat, all of them were driven by a desire by Lee and the other characters to keep Clementine safe. Obviously they wanted to keep themselves safe as well, but Clementine’s safety was always a top priority, especially in the end. 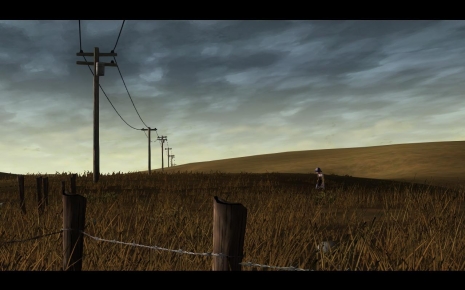 Well at least Clementine is safe…

The TV version of the series attempted to use a similar motivation for their characters with their “find Sophie” plot-line  While both utilized the same idea, the key difference between the two is the level in which people care about the characters, and that’s done with a well written story. Clementine is charming, smart, and generally a likable character to be around; I actually care about her well-being. Sophie was kind of just this generic kid who cried and freaked out whenever she saw a walker; I didn’t really care whether or not they ever found her. It’s not about the concept, it’s about the execution.

I collected no gold stars, received no achievements, and uncovered no secrets while playing The Walking Dead. I was not given any of the now common video game rewards designed to further “immerse” me in the experience, like a rat in a maze. Instead I was given a well written and engaging story, the details of which were mine to choose. Experiencing the story and the characters was my reward, their appreciation my gold stars, and saving Clementine my only achievement. Ironically, it turns out a game without traditional rewards can be the most rewarding kind of all.