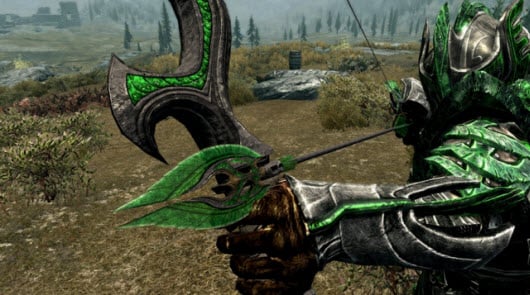 I’ve been playing Dragon Age: Inquisition for the past uh, 15 hours or so, and it’s been the first time I’ve stepped into a fantasy video game world (that wasn’t LOTR-based) since Skyrim. Bethesda’s game is arguably the best single-player fantasy title in history, yet Dragon Age has its own set of strengths. In a perfect world the two would combine to create a simply unstoppable force, though I’m not sure if it’s physically possible given the enormous work it goes into making each game their own way.

There is no better open world fantasy map than Skyrim, and before that, Oblivion, and before that, Morrowind, and you get the idea. Skyrim is a game where you can start in one place, and then literally go anywhere and do anything. Yes, there’s some vague semblance of linearity, but you can sink 50 hours into the game without ever getting past the first few intro missions.

Skyrim also has an absolutely incredible amount of cool quests, many of which go many beyond the simple “go here and fetch this variety’ that usually plagues the genre. The Daedric ones in particular were more memorable than any story quest, and the amount of quests and the beautiful, hidden locations in which you find them.

Story and characters are what Skyrim lacks. The lore of the universe is actually pretty solid, but given that you’re a permanently silent protagonist with a face that’s almost never, ever seen, it’s hard to establish your character as a likable lead or the star of compelling story. The individual quests of the game can have their own fun little stories, but without a larger cast of characters, or a lead you can actually feel connected to, its overall plot is lacking.

Itemization is strange in Skyrim. There’s a minimal focus on loot, and even though you can get individual pieces of armor, it’s usually the same full sets that are the best in the game, be they Daedric or Dragonbone. There are a few memorable weapons, but not enough, and not enough cool ways to get them either other than the Daedric quests. It doesn’t need to be a lootPG like Diablo, but more diversity would go a long way. 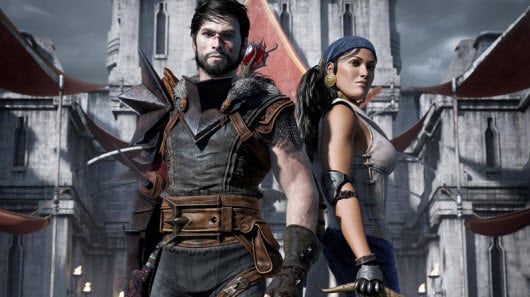 So what are Dragon Age’s strengths and weaknesses? Pretty much the polar opposite of everything I’ve brought up for Skyrim.

Dragon Age is broken up into segments rather than an open world, and can often feel very linear in regard to its difficulty. But it makes up for this by having a fully-voiced hero you can relate to, and a huge supporting cast full of colorful characters, the kind Skyrim is lacking.

Dragon Age has been pretty lacking interesting quests, but it handles itemization better than Skyrim with customizable weapons and armor that allows for more diversity, both visually and skill-wise.

If these two could learn from each other and adopt the strengths of the other to compensate for their weaknesses, they would be absolutely unstoppable. I’m not sure Skyrim needs the help as it has sold a zillion copies regardless, but I’m trying to imagine how great it would be with the colorful cast of a Dragon Age game, and a more coherent plot with better items.

I suppose there’s room for both to exist in the scene, as they do different things well and it would probably be impossible to have the scope of Skyrim with the story of Dragon Age, but I think both games should try to move toward more common ground. Both are close to perfect, but they’re just missing what the other has.

I’m currently roaming around uh, I don’t even know what the land is called in Dragon Age, but I’m having a good time all the same. That said, I miss the endless amount of caves and towns and cities you can randomly come across in Skyrim, rather than just a handful in Dragon Age. And sometimes there’s SO much dialogue, that you just want people to shut up. Just because characters do have a 300,000 word script to work with, that doesn’t always mean all of it is worth hearing.

Which series do you prefer, Skyrim or Dragon Age, and why?

[Photos via Bethesda and Bioware]