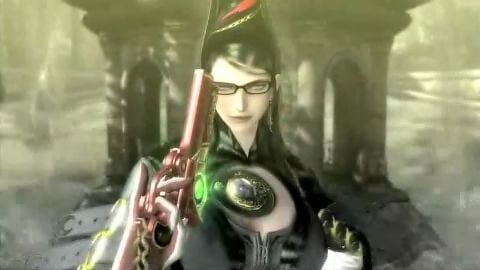 When Bayonetta came out this past Tuesday, I was at my local Gamestop at 10:100 a.m. to pick up my reserved copy.  Perhaps no 2010 release has been as hyped as Platinum Games’ Bayonetta, and I was certainly drinking the Hideki Kamiya Kool-Aid.  Well, after playing just about non-stop since Tuesday morning (with small breaks for Darksiders and, uh, practicing law), I can say that Bayonetta definitely lives up the the hype.  I just finished the game on normal difficulty, and I can’t wait for another go round at the hard difficulty level.  Bayonetta isn’t a perfect game, but as far as action games go, it’s about as gorgeous and smooth as you’ve ever seen. 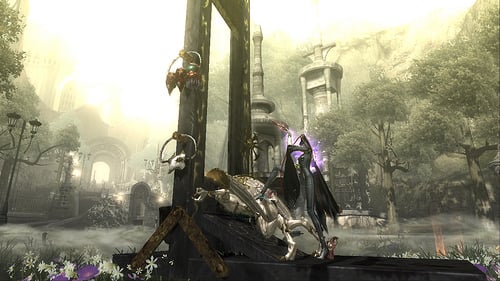 So, is Bayonetta just Devil May Cry 5 with a hot chick in place of Dante?  Well, no, not quite.  If you’ve played any of the Devil May Cry games, then Bayonetta will have a familiar feel right off the bat.  It’s a third person action brawler, and there certainly isn’t anything unique about that.  Where Bayonetta stands out, though, is through its stunning graphics, frictionless gameplay, and bad ass character design.  Bayonetta the best-looking fighter I’ve ever seen, but the fluid sense of control you have over your character isn’t sacrificed for the sake of making a gorgeous game.

Bayonetta herself is incredibly charismatic and sexy, and there’s a certain sense of satisfaction to defeated hordes of enemy angels with a slim, seductive witch.  I’m pretty sure that eventually, Bayonetta will stand alongside the likes of Lara Croft, Mrs. Pac-Man, and Samus Aran when one considers the all-time most iconic female video game characters.  She’s unrelentingly brutal, and when it comes to dishing out punishment, can easily hang with Dante, Kratos, and Ryu Hayabusa.  It’s safe to say that part of the joy of playing the game Bayonetta is Bayonetta herself.  But the real fun comes from the combat itself. 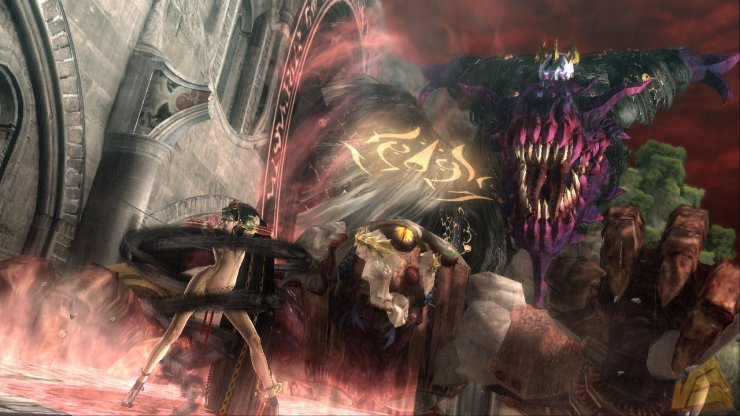 Like with other brawler, you can perform combos by tapping the attack buttons in various orders and with various timing, but I found out quite quickly that you can’t get very far in Bayonetta simply by button-mashing.  In fact, the game is designed so that in order to come out of battles victorious, you often need to activate Bayonetta’s “witch time” technique.  Just as an enemy is about to attack, Bayonetta can evade the strike, which automatically activates “witch time.”  The screen is washed with a brilliant display of undulating blues and violets, and for a few seconds, Bayonetta can move freely while her enemies are halted to a slow crawl.  Think of the Matrix’s or even Max Payne’s “bullet time,” but ten times more beautiful and ten times less gimmicky.  Yes, in Bayonetta, activating “witch time” is essential to success.

But “witch time” isn’t all there is to combat.  Just like in previous brawlers, you can collect currency (in this case, it comes in the form of halos that look a lot like Sonic’s rings) to purchase items, new techniques, and various upgrades.  You can also concoct – Bayonetta is a witch, after all – your own items through ingredients you acquire during gameplay, which is a great way to save cash. 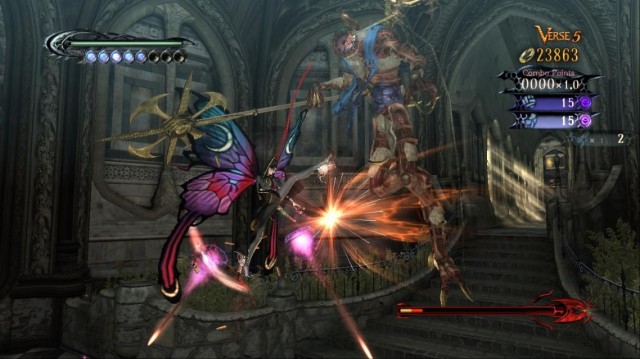 The upgrades are very expensive, but some of them are such game-changers it’s impossible to conceive beating the game on the harder difficulty levels without them.  My two favorites are an upgrade that, with the click of the right trigger, turns Bayonetta into a group of small bats upon taking a hit from an enemy, completely mitigating any damage she would have otherwise received; and an accessory that activates “witch time” whenever Bayonetta takes damage, ensuring that she’ll have enough time to recover instead of being on the business end of an enemy’s attack.  I’ve only been able to afford one accessory so far (and that’s with finishing the game on “normal”), so I’m excited to see what the other ones do.  Fortunately, like in Devil May Cry 4, you can go back and replay chapters you’ve beaten in the past in order to shore up some cash.  And even better, you can keep all your upgrades when you beat the game and move on to a harder difficulty level.

As a kind of unexpected bonus, there are a few stages in Bayonetta that aren’t traditional fighting levels.  In one, Bayonetta rides a motorcycle down the ominous Route 666, and in another, Bayonetta rides on the back of a giant rocket.  It’s this second alternate stage that gives me hope that Kamiya is planning on brining After Burner Climax to consoles.  Could this be his way of showing that it can be done? 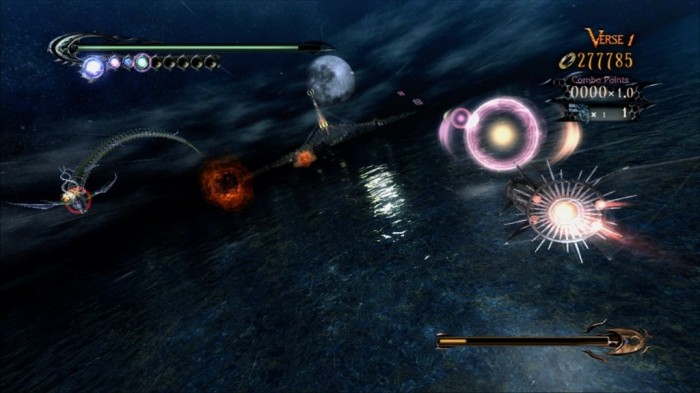 There are only two real negatives to Bayonetta, and one of them isn’t really that big of a deal.  The cutscenes aren’t much to look at, and some of them can be downright insufferable.  At first I sat through them, as I wanted some sort of context for what the combat was all about, but I learned pretty quickly it’s better to just skip them altogether.  Bayonetta is much more enjoyable when the action is being poured on.  The second negative is that for some reason – and I was worried about this when I played the demo – you can’t customize the buttons on your controller.  I prefer using the trigger buttons on the Xbox controller over the bars, but there’s nothing I can do to switch my “lock on” button away from the right bar.  Thankfully I’ve gotten pretty used to it.

Like I mentioned above, Bayonetta isn’t a perfect game, but for what it is – a super sexy and stylistic brawler with insane visuals – it’s all you could really ask for.  If you’re a fan of Devil May Cry or Ninja Gaiden, there’s no doubt you’ll be wowed by Bayonetta.  I’m really looking forward to tackling the harder levels – it’s a great sign for a game that once you’ve beaten it, you want to do it all over again immediately.

He’s usually making movies involving Johnny Depp in make-up…or Johnny Depp voicing an animated character, but what if Tim Burton set his sights on something different? Pokemon, for instance. This series by Hatboy shows the…

I know that a new Mass Effect game is coming SOMEday, but it’s going to be a long, long ways off, as Bioware is probably going to have to concern them with another sci-fi franchise… 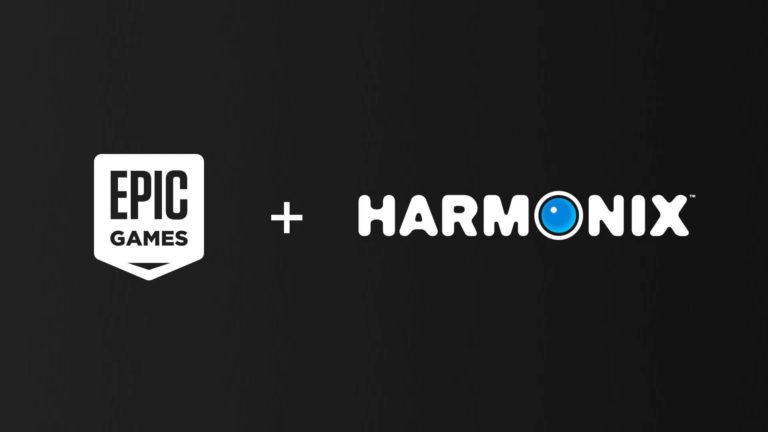 Harmonix, known for creating the most notable rhythm games of all time from some unknown games to the more notable Guitar Hero and Rock Band franchises, has joined the seemingly ever-growing catalog of companies now…

This post may contain, a few, spoilers. I know, I know, we’ve all heard enough about Bioware’s polarizing From Ashes DLC for Mass Effect 3. Everyone seems to have an opinion on the matter, including…

When I was a kid, I kept a list on a sheet of notebook paper of every Nintendo game I had beaten.  The list grew from one column to two, and soon enough I had… 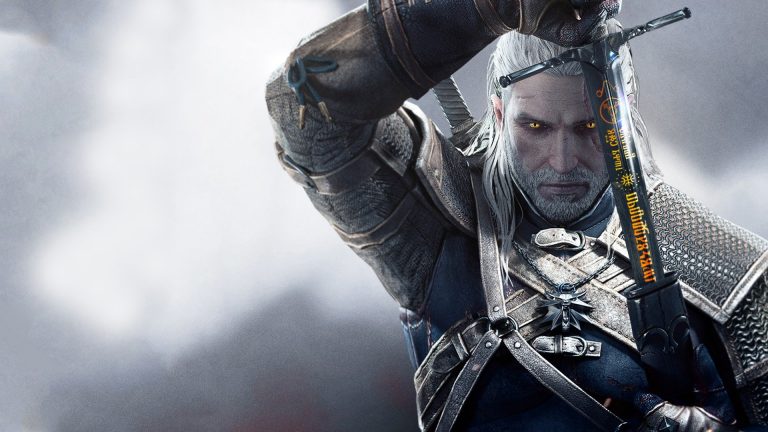 The start of Witcher 3: Wild Hunt isn’t exactly the same as that of its predecessor which, when started, was a screaming story of intrigue and betrayal. You must be thinking, by virtue of the…