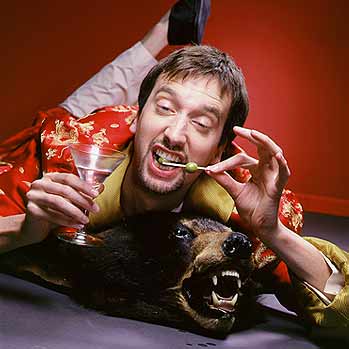 I hadn’t seen or heard anything about Tom Green for a long time before he appeared on the newest season of The Celebrity Apprentice.  He had appeared in a few movies, like Road Trip and Stealing Harvard, dated Drew Barrymore, and then just kind of fell off the face of the Earth.  I like Tom Green in movies, but – as my buddy Nick says – he’s also put on a leash of sorts.  When he had his own show on MTV, though, Green was allowed to do pretty much whatever he wanted.  I was a big fan of the show in college, and I was glad to see that most of the clips hold up pretty well.  You’re either a big Tom Green fan or you aren’t, so chances are you’ll either love these clips or will be left scratching your head.  In any event, here are a collection of some of the funniest clips from the Tom Green Show.

Sure, the news report is fake, but the people being interviewed don’t know that.

Tom goes shopping for a new house and acts like a total idiot the entire time.  The couple showing the house don’t seem to mind his antics, though.

Tom abuses the paging system at the local mall.  Check out his slick move to escape from the security guard at the end.

Tom manages to use the PA system during a minor league baseball game.  Needless to say, it doesn’t last very long.

Tom gets wasted off rum and cokes.  I’m pretty sure he’s not faking.

Show Me Your Teets

This was the first Tom Green clip I had ever seen.  Pretty funny…and disgusting.

I never knew how Tom Green’s dad put up with all the sh*t Tom would pull.  My father would have broken my neck if I did this.  For real.

The Where’s My Dinner Bitch Statue

Once again, I don’t know how his dad doesn’t beat him for things like this.

Tom disrupts a softball game and nearly gets his ass kicked.

As some of you may have noticed, I’m particularly interested in villains and antagonists because they’re usually much more complex and interesting than the heroes of film and television. I’ve said this before: I like…

This has to be one of my favorite cosplay galleries I’ve featured in quite some time, and it couldn’t be further removed from sexy. Rather, SoDespair shows that girl costumes simply have to be accurate…

httpv://www.youtube.com/watch?v=-1ftJQmyv5E I’m not sure we’ve ever had an actual discussion about how many Avatar: The Last Airbender fans we have on the site, but I imagine with how good that show is, there has to…

One of the greatest moments of my TV-watching life so far has been when lowly fisherman Nakota Nagano became the first (real) person to beat all four stages of the Ninja Warrior course in Japan….

For various reasons, I was behind the times with True Blood this season, and only recently did I sit down and get through season three. I know our own Madison reviewed each episode every week,…

Well that was unexpected. I certainly knew that the Governor would be back at some point on The Walking Dead, given his rather unceremonious exit from the show last year. But I thought he’d come…