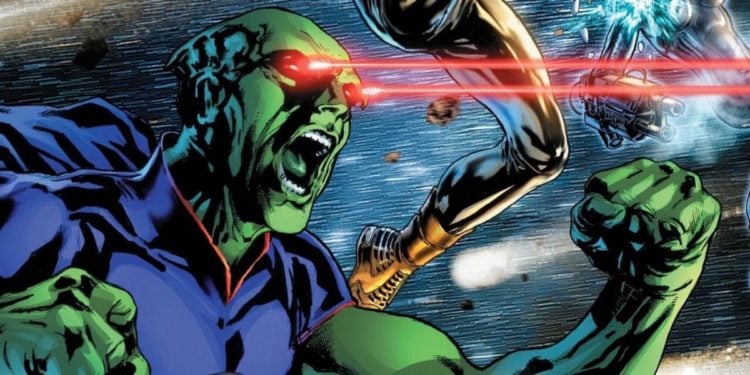 The Martian Manhunter can’t be put on the same level as Batman, Superman, and Wonder Woman. However, he is nonetheless one of DC Comics’s better-known superheroes, as shown by how he is one of the founding members of the Justice League. In recent times, there are those who will be most familiar with the Martian Manhunter because of his role in the Arrowverse. Here are 10 things that you may or may not have known about the Martian Manhunter:

Martian Manhunter is a title. The character’s name is J’onn J’onzz, which is an excellent example of superhero comics’ fondness for naming characters something that sounds similar to real world names but isn’t spelled the same so as to make it seem more exotic.

Perhaps unsurprisingly, the Martian Manhunter uses the name John Jones when he is disguised as a human. In some versions, there was a real John Jones, who was often a detective killed in the course of performing his duties.

Given his name, it should come as no surprise to learn that the Martian Manhunter is, well, an extraterrestrial being from the planet Mars. Martians have been very common in fiction, not least because there was a time when people thought that they could see canals and other signs of civilization upon the Red Planet.

4. Is a Green Martian

With that said, it is important to note that the Martian Manhunter is a Green Martian. This is relevant because Mars in DC Comics has been populated with various kinds of Martians at various points in time. One excellent example would be the White Martians, who are sometimes shown as savage warriors while the Green Martians are shown as peaceful philosophers.

Green Martians are very, very powerful. For starters, they possess superhuman strength, speed, and toughness. Furthermore, Green Martians can fly, regenerate, shapeshift, shoot eyebeams, see a much wider selection of the electromagnetic spectrum, and for some reason, turn themselves both invisible and intangible.

On top of their physical capabilities, Green Martians possess incredible telepathic and telekinetic powers as well. For context, the Martian Manhunter is the single most powerful telepath that can be found on the Earth in at least one version of the DC setting, though it should be noted that he is exceptional even by the standards of his species. As for his telekinesis, well, suffice to say that he isn’t limited to throwing around brute force attacks, thus making him even more dangerous.

Besides his powers, J’onn J’onzz possesses a considerable measure of competence as a detective as well. Due to this, he has been compared to a combination of Batman and Superman within the comics themselves.

Of course, just as how Superman is weak to Kryptonite, the Martian Manhunter is weak to fire. Sometimes, this weakness seems to be physical, which is why it causes him to lose the ability to maintain his physical form. Other times, this weakness seems much more psychological in nature, though whether it is limited to the Martian Manhunter or can be extended to other Green Martians is something that can see some variation from version to version.

9. Sometimes One of the Last Green Martians

To continue the Superman parallels, there are versions in which the Martian Manhunter is one of the last Green Martians in existence. It isn’t unknown for other Green Martians to show up even in these versions, but unfortunately for him, they tend to be either murderous or otherwise horrible.

The Arrowverse isn’t the first time that the Martian Manhunter has been in a live-action project. Before the shared setting, the character was on Smallville, in which he was an old friend of Jor-El who came to Earth for the purpose of keeping an eye on Kal-El so that he could lend a helping hand if that proved to be necessary. As such, he saved Superman’s life on one occasion in that series by bringing him closer to the sun so that he could heal up from an otherwise fatal wound.