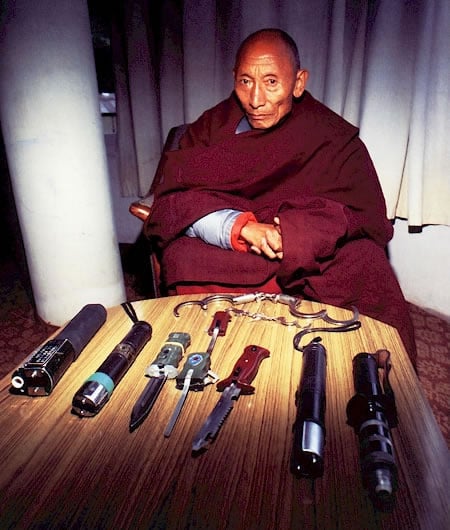 When it comes to gathering crucial information, torture isn’t the most effective way to go about doing things.  If you waterboard someone long enough, they’re bound to tell you anything you want to hear.  That doesn’t mean that torture scenes in movies aren’t great to watch, though.  Some torture scenes are enough to make you queasy, and imaging yourself in place of the person being tortured can make you sick if you dwell on it long enough.  It can be glorified, too, as in the case of CTU agent Jack Bauer.  Whether it’s burning, drowning, tooth-pulling, or the classic smashing-fingers-with-a-hammer, torture has a strong foundation in movies and many torture scenes stay with you for a long time.  After the jump, take a look at 10 of the most memorable torture scenes from movies.  Warning: Many scenes are graphic and NSFW.

This scene is real tough to watch.  There are few things worse than having your teeth ripped out of your mouth.

Easily the most memorable scene in the movie.  We get to see how sadistic Mr. Blonde really is; it’s not so much the information he wants from the cop, he just really enjoys doing this type of thing.  Fortunately, he’s stopped before he can set the earless cop ablaze.  Sorry about the “alternate” clip, but it was tough to find an embeddable one.  Also, after seeing this movie, there’s no way you can here “Stuck in the Middle with You” and not think of this scene.

This entire movie – as well as its sequel – are about torture.  I figured this clip was about as nasty as any.

It’s amazing to think that a man like James Bond, who uses his junk so often, would be able to keep quiet during torture like this.  I would have squealed the second the bottom part of the chair was cut away.

This is just disgusting.  Nicky was undoubtedly a real gangster, and his methods of torture prove that.  Karma is a bitch, though, as he and his brother found out at the end of this movie.

This is about as shocking a movie as you’ll ever see. You have to admire how calm and methodical Asami is during her “work.”

Finally, a torture scene that’s both memorable and not difficult to watch!  I’m not sure exactly how this giant machine works, but I think it’s pretty clear that it does indeed work.  Poor Wesley.

I thought the remake of this movie stunk, but the above torture scene made it worth watching.

Alright, here’s another “light” torture scene.  Lord Farquaad goes to town on the Gingerbread Man.  It’s tough to watch this scene and not at least chuckle.

And Dustin Hoffman gets some torture.  The look on his face when he sees Dr. Szell’s tools says it all.

I’m sure there are many torture scenes out there that didn’t make it into this article; these were the 10 that came to mind when I starting thinking of torture in movies.  Let me know your favorites in the comments section!