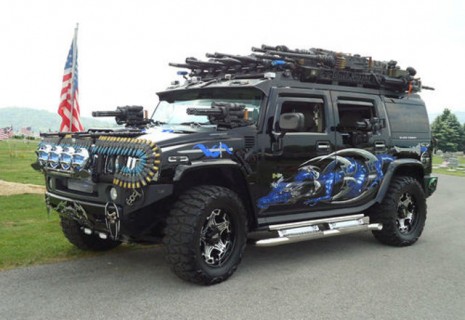 Ever hear the expression “too much of a good thing?” Well as it turns out, it applies to all areas, even building your own custom zombie killing machine. I’ve seen vehicles loaded with guns and weapons before, and most of them have been pretty badass. But this thing? This thing took so many badass pills it overdosed and had to be rushed to a hospital where they pumped belt fed ammo out of its stomach

You can buy this thing on Ebay for $55K, which I believe is actually a discount over a regular Hummer due to all the crap attached to it. And what exactly is all the crap? See below:

Everything is controlled with a wireless remote? Including the weapons? Don’t sit on it, or you’ll accidentally riddle the minivan in front of you with 5,000 rounds I guess.