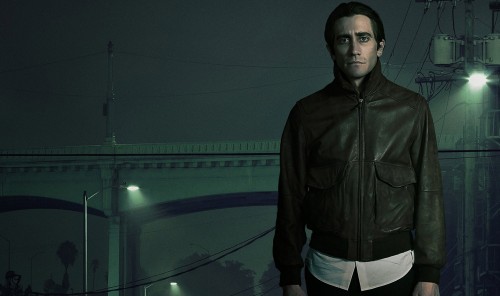 I’m kind of a sucker for journalism movies. Stuff like Good Night and Good Luck, or Capote, or the arguably-best-ever The Insider. From the brief trailer glimpses and review snippets, Nightcrawler looked to cover the dark side of modern TV journalism, with Jake Gyllenhaal as a creep who rushes from car crash to car crash to grab footage before the cops show up. It almost looked like a contemporary riff on Ace in the Hole or something. I had to check it out… and what I got was a bit of a surprise.

Not necessarily an unpleasant one, either. As a directorial debut, Nightcrawler‘s a revelation. As a satire, it’s a standout. As a journalism movie, it’s… well, it’s actually a bit misleading.

But that’s okay, because what Nightcrawler really is, is one of the best movies I’ve seen all year.

Honestly, there’s nothing wrong with the summary on the film’s IMDB page: “When Lou Bloom, a driven man desperate for work, muscles into the world of L.A. crime journalism, he blurs the line between observer and participant to become the star of his own story.”

To describe the plot in any more detail would do it a disservice. Although, in another sense, the thing unfolds sorta predictably — but this is a movie that invests way more in the motivations and subtexts underneath its story than it does in crafting some sort of sensational thrill ride.

So who’s responsible for this thing? 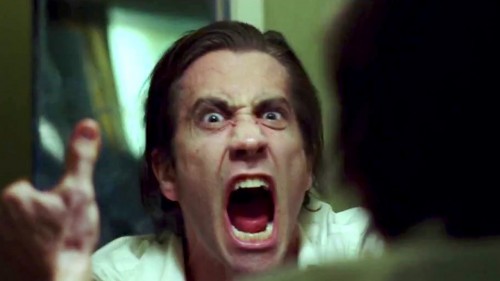 The movie is written and directed by Dan Gilroy. He’s penned a few screenplays already, but Nightcrawler marks his directorial debut. You’re familiar with his brother Tony, Bourne trilogy scribe and director of classy stuff like the somewhat-overrated Michael Clayton and the somewhat-underrated Duplicity. Tony’s a really good filmmaker. After this weekend, I feel Dan is better. Nightcrawler is more organic and piercing than anything I’ve seen from the other, more famous Gilroy. This movie dives right into it’s weird, edgy premise in a way that puts Dan Gilroy right up there with J.C. Chandor in terms of smart directors to keep an eye on.

One of the things I like best about Gilroy’s direction here is his restraint. Given the sensational nature of the onscreen carnage Bloom exploits in this story, it would be tempting to gin up the violent particulars of one scene or another — but Gilroy stays the course. The movie’s details feel realistic throughout. 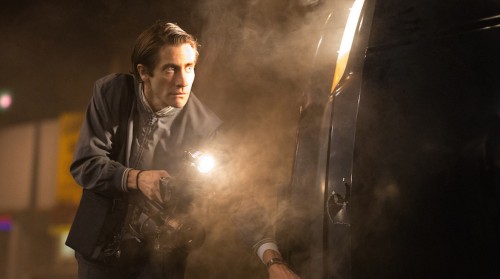 Well, realistic up to a point. There’s a strong satiric edge to Nightcrawler, but it’s not cutting into the television newsroom like you might think. Certainly the question of journalism ethics is addressed, but Nightcrawler assumes that we’re comfortably jaded with that profession and moves on to its own unique vantage point of this story. Instead of aiming at the 24-hour news cycle or some other familiar target, its jabs are directed at the creepily inhuman way that businesses (or, perhaps, business owners) treat their very human employees and customers.

That unnervingly cordial, professional distance is the lens through which Bloom views absolutely everything. At certain moments, Bloom carries himself like the only sane man in the world; at others he comes off like a complete maniac. He speaks of his cheap camcorder and old car as business assets. He hires a homeless guy to help him out for cheap by insisting that internships in his “business” often turn into full-time employment opportunities.

Like any self-respecting business owner, Bloom balances every interaction with a cost-benefit analysis. Even semi-romantic ones. The games are a little too familiar for comfort. When, for instance, he’s told that friends don’t pressure each other to sleep with them, Bloom’s answer is simple: “Of course they do.” 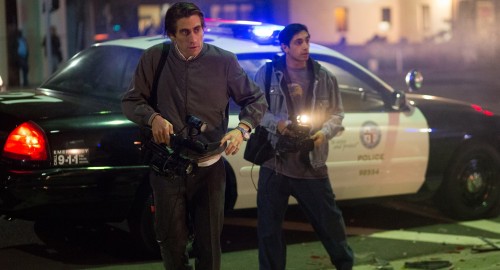 Jake Gyllenhaal appears to be having a blast in the part; a friend of mine remarked that his performance recalls of Christian Bale’s turn in American Psycho. Like Bale’s self-obsessed Patrick Bateman, Gyllenhaal’s Lou Bloom talks like he’s learned human speech from books and manuals instead of from other humans. He sounds like some sort of employee orientation video come to life.

Supporting performances are strong across the board, with two particular standouts. Rene Russo wears her age well as Nina, an ethics-free news director who takes a particular interest in the content Bloom starts capturing in his new line of work. Bloom’s other business partner is Rick, a loser stuck in the passenger seat of all these wild journalistic field trips. Riz Ahmed is a new face to me, but he essays the character perfectly. Russo does the same. 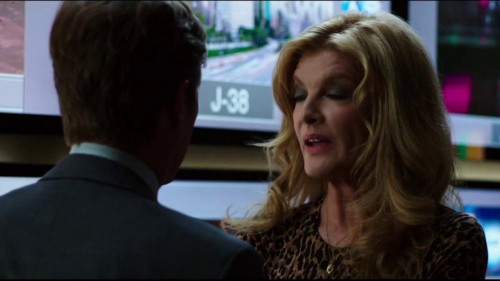 Elsewhere Bill Paxton shows up as the guy who introduces Lou Bloom to nightcrawling, and he’s just fantastic in the part. I’ve actually met a few soulless paparazzi types, and Paxton’s representation of their attitude towards work and peers is dead on. Sidebar: Every role I’ve seen Paxton in over the past few years has been great.

If I haven’t made this clear yet, Nightcrawler is a movie filled from top to bottom with good stuff. Peformances, themes, writing, the works. Gilroy even proves himself a filmmaker with action chops in a few key moments. The film is quality; it’s also a good way to bridge the “scary” season of October with the “prestige picture” season that closes out the cinematic year.

There’s about to be a lot of good movies coming out. Make this one a priority.

Idiocracy is one of those movies that only gets more relevant over time, which is a scary prospect considering the content of the film. As American gets more commercialized, it also seems to get dumber,…

Despite my misgivings about the whole YA movie craze, I really wanted to like the Divergent series.  I was basically on board for the first movie’s young adult twist on Ravnica, even if its eventual climax left much…

No, I don’t have a particularly relevant reason for posting this picture of young Clint Eastwood getting his hair done, other than the fact that it’s awesome, but that’s good enough for me. It’s hard…

Computers are taking over our lives as we speak. Today, we couldn’t imagine our days without a smartphone to wake us up in the morning, to accompany us on the loo for a time we…

httpv://www.youtube.com/watch?v=1L3eeC2lJZs For those of you who don’t know, the Alamo Drafthouse is a small chain of theaters in Texas with a very high focus on a quality theater experience. This means no talking and absolutely…

It’s strange, really. I can’t think of another filmmaker who follows such a seemingly cookie-cutter mold and each every time they make a film, yet still manages to create movies that feel fresh, creative and…