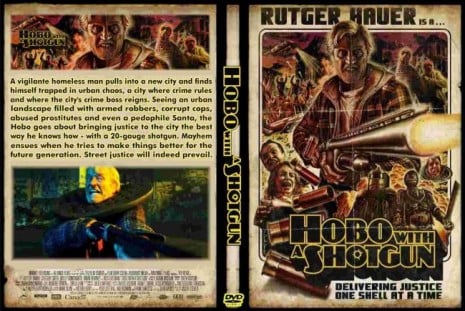 Whoa. When you craft a title like that, it’s a little intimidating to actually start writing the article itself. Time to put some money where my abnormally speedy mouth is.

I’ve actually been thinking about this subject for a while. I saw Hobo with a Shotgun over the holidays (that’s just how much fun I am on Christmas), and came away immediately impressed. As per my routine after watching a film that evokes such a response, I got on the Google machine to read reviews and research the project’s background. Reviewers’ opinions varied widely. The deeper I dug, the more apparent it became that I had no business offering up any kind of personal commentary on this particular movie. Yet here we are.

You see, Hobo began as a $150–budget trailer in a contest to promote Robert Rodriguez and Quentin Tarantino’s upcoming Grindhouse double feature. It was received so well, in fact (thanks, Internet!), that the project evolved into a full-length film in 2011. Now, I thoroughly enjoyed Grindhouse, but 2007 was honestly the first time I’d heard of the term. I was born during the mid-80s into a very Christian household, so you can imagine how many violent exploitation movies from that era I was exposed to growing up. Hellfire, I only saw Cannibal Holocaust a few years ago, and that’s where my expertise ended until quite recently. So I never truly appreciated the time period Grindhouse paid homage to until long after the fact.

But that’s actually what I believe lends my voice some credibility. I love cerebral action and horror movies, but every now and again I like to unplug my brain with films that are more about the visuals than any kind of message or social commentary. And I’m totally into violent movies (though not usually “gore-for-gore’s-sake” torture-porn like Hostel, Wolf Creek, etc.). So I was uncertain how I felt about revisiting this genre back in December.

Ultimately I decided to dive in, knowing full well I couldn’t personally identify with the cinematic era Hobo represented; I wouldn’t necessarily pick up on the subtle (or even overt) references that so many reviewers latched on to in their critiques. (The only exception is Hobo’s opening music, but that was obviously a fluke.) Nevertheless, I thoroughly enjoyed this movie, even though it didn’t feel like I deserved to. I mean, I didn’t belong to the Grindhouse Club. 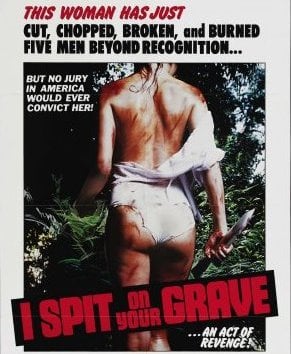 I hear their keggers are off the hook.

I’m not exactly part of the minority here. When that first faux-trailer hit, audiences worldwide were instantly clamoring for someone to step in and make Hobo a reality; it’s currently sitting at 67% freshness over at Rotten Tomatoes. The film struck several nerves in our society somehow—both positive and negative ones—and over the past month I’ve occasionally wondered why.

It’s impossible to write a competent review of Hobo without first recognizing its context; taken at face-value, it’s an abhorrently graphic tale about one deplorable character after another. This is how my Presbyterian mother would receive it, I can assure you, and nothing would convince her that any redeeming values lie beneath Hobo’s gritty, intestine-splattered exterior. As a case in point, if she reads the word “shit” in an article or story of mine, she is disheartened at best. It doesn’t matter if I used “shit” to punctuate a joke or mock an annoying celebrity; no, “shit” is a dirty word used by unsavory people, and the fact that I used it makes me unsavory in turn, reflecting poorly on her parental influence. Losing the forest through the trees, if you will. Similarly, Hobo would represent to my mother a direct reflection of our society as a whole, exemplifying how morally bankrupt America has become. Christians often think in hyperbole. (Sorry for tossing you under the bus here, Mom. I’ll get my comeuppance after the Rapture, I know.) 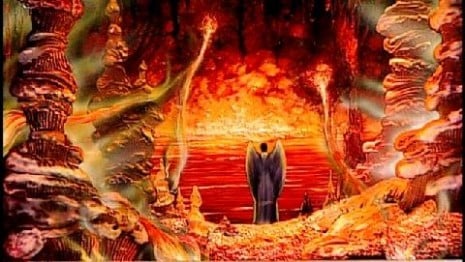 “Is that you weeping beside the Pit of Everlasting Sorrow, son? I promised myself I wouldn’t say ‘I told you so’ during my first visit, but…”

In a way, I suppose she’s right. Ours is a culture obsessed with violence, sex, and abject profanity—it’s hard to argue with her there. Those three things have always been topics of controversy in movies, television, music, and video games. And these sectors of pop culture push the envelope of what they can get away with every year. That’s why deliberately graphic films like Hobo, The Devil’s Rejects, and Martyrs resonate as pure garbage for [less corrupt] people like my mom: to them, these movies reflect a sin-laden society headed straight for the gutter.

However, this is partially why Hobo resonates with me as well, because it puts me in the unique position of someone who intimately understands each viewpoint (intensely conservative vs. intensely liberal). When a scene unflinchingly portrays a prostitute’s hand getting slowly fed into a lawnmower (the irony of that moment just now occurred to me, by the way), it’s going to grab your attention. When you watch a grown man meet his end via barbed-wire noose and a 1974 Ford F-150, it’s going to leave an impression. That’s part of the point.

“These little brats are soooo not getting birthday cards this year.”

And while the imagery is ridiculously vicious, it’s not intended to be taken seriously. That’s why it’s so absurd and over-the-top. (Though I will say the school bus scene was simultaneously brilliant and hauntingly disturbing for me.) The challenge, if you have the stomach for it, is to find those hidden nuggets of awesome that separate Hobo from its mindlessly violent counterparts. For example:

Slick’s death. As anyone could have predicted, the character of Slick gets what’s coming to him before long. As he…ugh, bleeds out, he uses a payphone to call his kingpin dad, the Drake, and say goodbye. This is the one and only time in the film that either character exhibits love or affection to anyone. Well, their demented version of it, anyway. Salvation has passed these gentlemen by long ago—you can hear it in Hauer’s brilliantly delivered “Dear boy” as he pulls the trigger—but some miniscule piece of Slick and the Drake’s long-dormant humanity remains. When the school bus to Hell arrives and Slick tells his pop how “rad” he is, well, that’s the damn craziest piece of poetry I’m ever seen.

“…Also, I once farted on your face while you were taking a nap on the couch—you grimaced but didn’t wake up. I…I’ve just been feeling guilty about that for years…”

The Plague. Holy shit! Is that not such a simple yet mind-blowing concept for a pair of villains?

Ivan’s skates. Sorry Mom, I don’t mean to glorify the violence too much, but that’s a damn novel weapon if you ask me. And that one line—“I ruin everything!”—is spinechillingly sadistic.

Rutger Hauer. And finally, I’ll get to the authenticity of Rutger Hauer’s hobo character. While every other lead actor (save for Molly Dunsworth) hammed up the extremity of their roles to the point of living, breathing cartoon characters, Hauer’s performance is wink-and-nod–free; that is, the titular hobo is absolutely sincere about his actions/reactions to the warped population of Hope City. When Abby the not-evil-yet prostitute (Dunsworth) takes him to her apartment, cleans his wounds, and offers him a place to stay for the night, his humble, reluctant response is both genuine and oddly touching (along with his story about bears).

And what a brilliant monologue at the hospital. Brilliantly written, but expertly executed. I like it so much I’ll include it here in its entirety:

“A long time ago I…was one of you. All brand-new and perfect. No mistakes, no regrets. People look at you and think of how wonderful your future will be. They want you to be something special…like a doctor or a lawyer. I hate to tell you this, but if you grow up here, you’re more likely to wind up selling your bodies on the streets, or shooting dope from dirty needles in a bus stop. And if you’re successful, you’ll make money selling junk to crackheads. And you won’t think twice about killing someone’s wife, because you won’t even know it was wrong in the first place. Maybe…you’ll end up like me: a hobo with a shotgun. I hope you can do better.”

“Some of you might grow up to be English majors. Honestly, the crack’s a safer bet.”

The hobo’s response to the hyper-realistic violence surrounding him is as authentic as the rest of Hauer’s performance. He might be mentally unstable, but he’s still a virtuous person, and by the time he reaches for that shotgun, his hand is almost literally forced to do so.

So have I sold you yet? Is this not the most influential film of our generation? Didn’t think so. However, one of the first reviews I read on Hobo posited something I’d like to play devil’s advocate with. I’ll give the context its due:

“As Hauer’s thoughtful and sympathetic performance indicates, there was potential for much more than a parade of ‘so shocking it’s quaint’ violence (there is, to be fair, one genuinely outrageous moment involving a flamethrower). The idea of a homeless man becoming a vigilante in the real world, not the stylized and hyper-violent landscape presented, presents the potential to be a real movie with real thought and commentary.”

For the record, I agree with most of these sentiments; it would indeed be an excellent premise to plunk Hauer’s character into a more realistic setting, and the results more meaningful. But I’m here to tell you it can be a truly unpleasant world we live in these days, and the fictionalized violence of exploitation-era films occasionally makes its way into reality (at least depending on who you talk to).

So yes, I think Hobo with a Shotgun has plenty of social commentary to offer, and plenty of thought-provoking moments that are worthy of serious discussion. Because when you watch the news every now and then, don’t you get fed up sometimes? Can’t you identify on some level with someone who has nothing to lose just saying, “Enough’s enough”? Doesn’t a tiny, tiny part of you want to reach for a shotgun?