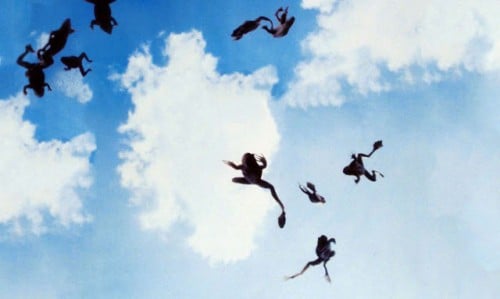 Two things I need to say, right away. One, I will start this article out by saying that I don’t like Tom Cruise. I think he is a strange little man, and I think that some of his ideologies are from the “school for the batshit insane”, but that doesn’t mean I am not allowed to like some movies he is in, or some performances he delivers. Magnolia, to me, outside of Collateral, is one of my favorite Tom Cruise performances ever. I could sit here and tell you how he plays a sort of sex-guru scumbag in Magnolia, but that would be me getting typically ahead of myself. I also think calling this a Tom Cruise movie is seriously unfair to the level of talent involved. Much like Hot Rod, which I spoke about last week.

Magnolia’s success depends on the people involved, and the people involved with Magnolia are truly mind-blowing. Second thing I want to mention before I jump headlong into this is I know Magnolia received a great many accolades and awards when it came out, and that is all fine and good, but that does not necessarily mean you have seen it. It is the movie I bring up the most that I expect people to gush about, yet out out of every twenty people even know what it is. So that is why I am focusing on Magnolia for my Why Haven’t You Seen It Column. I know MANY people have, but I know YOU haven’t, and I am here to change that. So what is Magnolia about, you ask? Well, that might actually be a little harder to explain. 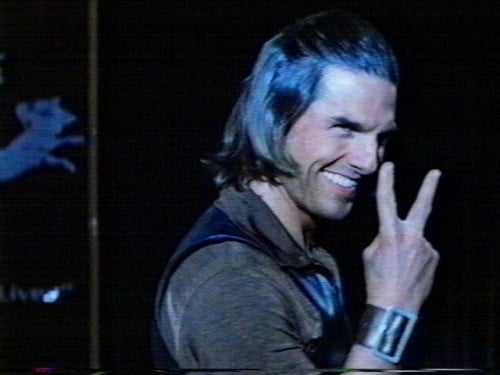 These are my “two in the pink” fingers.

Magnolia shows us a 24 cycle in L.A. More than one, flowing movie, these are attached vignettes, all connected by location and some other strange circumstances and coincidences. This film all happens on one very long timeline, and to pay attention to the details only benefits the viewer. Magnolia was director Paul Thomas Anderson’s first movie after the massively successful, Boogie Nights, and I think the scope and intensity of the film may have scared some people off.

First off, you have the length of the movie, which hovers right around three hours. That can be a long time to ask anyone to sit still and pay attention, and I think movies that go over two hours all run the risk of alienating certain demographics of their audience. Namely, people with ADD. What sets Magnolia apart from other three hour movies is the fact that you do not spend a great deal of time focusing on any one story. Instead, we jump from story to story, with one vein that seems to interconnect every single one of them.

Before I say to much, I shall bestow the trailer upon thee.

It is almost a sin for this many good actors to be in the same movie.

What is amazing, even with that trailer, the movie is aware it shouldn’t work. It is aware all the branching stories can be jarring, and some of the subject matter at hand is pretty damn depressing (molestation, abandonment, isolation, loneliness), but I will tell you, Magnolia is one of those finely tuned machined, where even though there are 2000 seperate parts, every single one is perfectly in sync with the other, and the machine ends up purring like a kitty as a result, when in fact, it looks like it should be clunky and loud. Speaking of clunky and loud. It would be foolhardy of me not to mention the soundtrack and just how important and essential it is for the film. 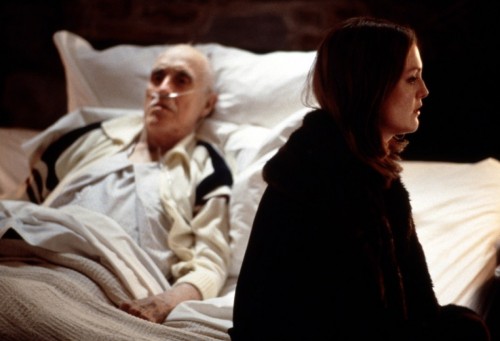 Yes, the movie can be a bit “heavy” at times.

The film’s soundtrack was written and recorded by the amazing singer songwriter, Aimee Mann, best known for her song Hush Hush (Voices Carry) from the 80’s when she played with a band called ‘Till Tuesday. Aimee Mann is an absolute legend in the industry, and her raw, naked vocals, often paired up with only an acoustic guitar and gift for story telling, adds up to be both achingly beautiful and truly haunting. There are moments in Magnolia that NEED her music, and there are few films that have ever used a score as perfectly and as intimately as Magnolia uses Aimee Mann’s soundtrack. For proof of this, you need look no further than the single moment in the middle of the film, when all the characters, who are aching in their own ways, sing her song, Wise Up.

You may think this would pull you out of a movie, but to be honest, I cannot recall a musical moment from a mainstream film that I think works better or more powerfully than this scene. I will share it with you now, knowing, the images out of context will spoil nothing for you. Just bask in the quiet beauty of this moving moment with me, right now.

Again, this is NOT a music video. This is a scene in the middle of the film.

I know normally, after the trailer, I talk about performances, but I hope you would see the trailer and watch that musical moment and realize, to do that would add another thousand words to this article. There is no performance in this movie that will not steal your breath. Also, moment of silence for Jason Robards. Magnolia was his final film role, and the fact that he plays a dying man while he was pretty much dying in real life is staggering. The man was an absolute film legend, and while many younger people may not know who he is, they should, and hopefully this movie will introduce him to them. Check out Something Wicked This Way Comes and Johnny Got His Gun to see just what Jason Robards was capable of. 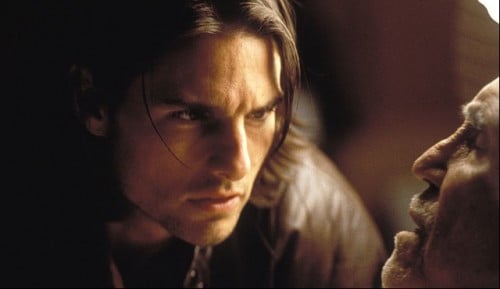 There is so much intensity in this scene, even if you hate Cruise, it’s hard not feel it.

On top of that, you have a young, serious, John C. Reilly just trying to find love.  Philip Seymour Hoffman as a nurse, helping a man reach his final moments in as peaceful a way as possible. You have William H. Macy as a former child prodigy who has fallen from grace, and you have Tom Cruise, teaching men to, and I kid you not, respect the c*ck and tame the c*nt. Like, honestly, I am not messing with you. It is an absolute menagerie, and for that reason alone, I have to ask, why haven’t you seen it?

The best part is, even in telling you all that, and showing you all that, and sharing details about the film, you have NO idea what is in store for you with Magnolia. It is a film that bounces between genres and moods, and it can be quite a ride to go from disgusted and sad, to laughing and feeling awkward, but that is the type of epic journey that Magnolia takes you on. From the surreal, to the heart-wrenching, Magnolia shows us that we are all connected, we are all lost, and above else, we are not beyond hope. The hope that, even when life gets so dark and bleak that we feel like we have nothing left, sometimes, the most insane, absurd thing can happen to remind us in a flash:

Okay, now go read my site. I’m poor and as depressed as everyone in this film.