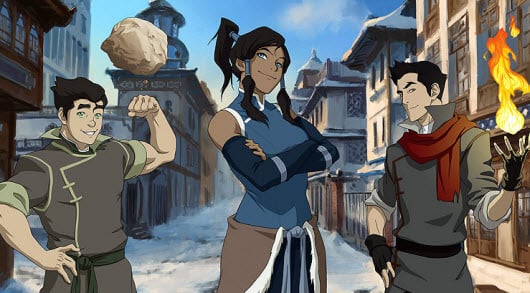 The Legend of Korra is currently marching through its final season, or “book” as it’s known on the show. It’s had four, which is one more book than its predecessor series, Avatar: The Last Airbender, though I will say I am waiting to watch book four all at once, so I won’t be discussing what’s happened in it so far for this article.

Rather, I’m wondering what happens next once it wraps.

I remember being overjoyed that The Last Airbender was going to live on after its failed M. Night Shyamalan movie adaptation. A whole new series? It was almost too good to be true. And The Legend of Korra has delivered in every way. I’m not sure it’s exactly as good as the original series, but even if it’s 90% as good, that makes it better than most anything else on TV.

What’s becoming clear is that The Legend of Korra has demonstrated that the series may need a new home that isn’t Nickelodeon. The third book was yanked from the airwaves after falling ratings had Nick deem it unfit for broadcast. Now the entire fourth book is streaming online every week instead of on TV as well. The show is being treated like a webseries rather than arguably one of the best things on TV today, and one of the best animated shows ever. 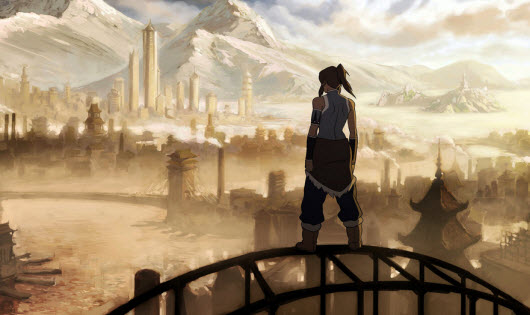 My secret hope for the series is that it gets adopted by a streaming service like Netflix, which is a collection of every weird kind of genre show imaginable in a way that other networks aren’t. Like, I can’t even imagine what channel something like The Legend of Korra would have aired on other than Nickelodeon or Cartoon Network maybe. It’s not an “adult” cartoon like FX’s MA-rated Archer, rather it’s a “mature” cartoon for having actual mature themes that are too deep for many kids, hence the show being lower rated than most of Nickelodeon’s more mindless fare. To me, all of this adds up the Netflix being a good fit for the series to live on.

But how will it do that, exactly?

Obviously the future of The Last Airbender Universe will depend on how The Legend of Korra pans out in the end. At the end of book three, Korra was broken and book four appears to be about her journey back to the light. The time jump between Avatar and Korra was about oh, fifty or sixty years or so, and now I’m curious to see if a new series would jump forward even further in time, and what that would look like.

There are rumors that the show may want to do a full Avatar elemental cycle. The original Avatar (at least in the series) was Aang, an airbender. Next in the cycle is Korra, a waterbender. Then I believe Earth is next, followed by Fire. That’s two more potential series before the show starts repeating itself. 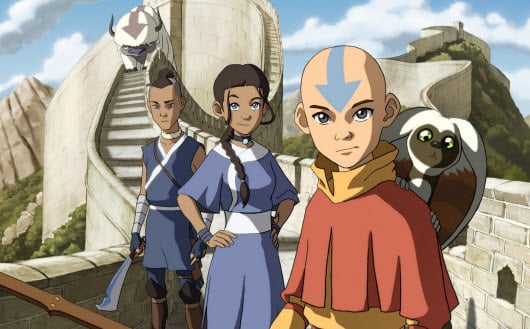 The Legend of Korra was a hit with fans because it brought back The Last Airbender’s characters in the form of either older versions of themselves, flashbacks, or their descendents. A major character in The Legend of Korra is Tenzen, Aang’s son, for instance.

If we jump forward another 60 years or so, who might we see then? The children of Korra and Mako (depending on if they end up together)? Bolin as an old man? Aang’s grandkids all grown up? It certainly seems possible.

But it’s not only the characters who age on the show, the entire society does as well. In Avatar: The Last Airbender, the world was more or less in the era of Feudal Japan. Then, it fast forwarded to something approaching a steampunk industrial revolution which included airships and cars. Would another jump forward take it practically do a parallel universe in a present day time period? The society evolves rather fast, it seems, so that doesn’t appear to be out of the question. Could Avatar work in practically a present day setting, or does it need to stay buried in the relative, fictional past a bit? I’m not sure.

I honestly don’t care what they do next after The Legend of Korra. I just hope it’s SOMETHING. I am not an anime person (debate if Korra is anime all you want), yet both series I count among my favorite shows as they convey complex plots and real emotion through animation in a way other shows don’t. I would hate to see that die because dumb kids on Nickelodeon would rather watch Spongebob reruns.

Very sad news today. Spartacus: Blood and Sand star Andy Whitfield passed away this weekend from non-Hodgkins lymphoma. He had been battling the disease for the last eighteen months, and his absence from the hit…

httpv://www.youtube.com/watch?v=cFpKYhvD66I YouTube may be 90% cat videos, but every once in a while a new gem is discovered. I first saw Steve Love when he was doing drunken impressions of John Madden, but since then…

If there’s one thing I hate, it’s finding a spider in the bathtub.  Ewww.  If there are two things I hate, then the second one is a story that doesn’t have a good ending.  You…

Now that Daenerys has left Qarth, there won’t be much reason for the show to go back there. Therefore, the crew pillaged the city and one of the writers, Cat Taylor, decided to keep the…

Two plotlines became quick and bloody during last night’s finale, one ending and another beginning. As expected, Daryl’s new posse of bandit rapists caught up to Rick, Michonne and Carl and proved that yes, they…

\ Yesterday came the surprise announcement that James Franco and Anne Hathaway would be hosting this year’s Academy Awards. It’s a far cry from the comedians that usually host the show (Jon Stewart, Ellen Degeneres,…