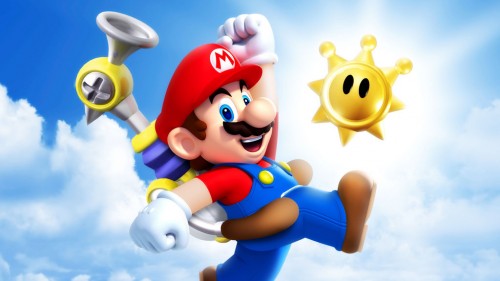 The true 3D platformer is all but dead. When consoles transitioned to 3D in the mid 90’s, there was a concerted effort to bring classic game formulas to the third dimension with updated graphics. Abominations like Bubsy 3D  resulted, and despite many successes, games eventually deviated from the tried-and-true formula of leaping from platform to platform that was established back in 1982 with Donkey Kong. Now, nearly every franchise released that involves unrestricted, third-person 3D movement favors other elements than careful jumping.

There’s a good reason this: it’s hard as hell. In 2D, the camera is usually fixed, and the directions are mapped predictably to the controller. Add another dimension and things get dicey. 3D allows for objects to constantly move in between the player and the camera, meaning it helps to have the camera move about in 3D space along with the character and keep track of the action. When doing this, it also helps to have the player’s controls mapped relative to the position of the camera, so that they can align their movements to the new perspective.

A great deal of complaints leveled at early 3D platforming games focused on how difficult it was to get the camera where you needed to let your character walk reliably down a platform without falling off. Constantly slipping from an edge or misjudging a distance could prove incredibly frustrating, and many games had people like myself beginning to wonder if they truly sucked, or if the game itself had bad design.

Well, rest assured gamers. It’s not you, it’s them…

There are countless issues for 3D that make not falling accidentally to your doom a chore. The challenge in 2D games like Donkey Kong Country and Super Mario Bros. focused on avoiding enemies while traversing difficult obstacle courses with precisely timed jumps. This isn’t even an option in 3D because of the difficulty of maintaining a consistent momentum. The camera moves (or won’t move) and you end up walking in a direction you didn’t mean to.

Imagine if in Super Mario 64 you had enemies to avoid on every platform as you climbed the clock tower level. It’d be a nightmare. The precision that 2D allows gets incredibly muddy in 3D unless you keep a fixed perspective like in the new Super Mario 3D World, or make gravity a non-issue outright by hugging to the surface no matter where you stand, like in most levels of Super Mario Galaxy.

Over time, programmers and designers began to avoid these issues altogether. Developers began to cover up their inability to account for the misgivings of 3D by creating games that diminished the importance of precise jumping. This led to some fun, hybrid action/platforming titles like Spyro, or puzzle/platforming games like Glover. It was easier to give your character a gun and have them focus on blasting enemies like in Ratchet and Clank, or make climbing more of a factor than jumping like in Uncharted or Shadow of the Colossus. 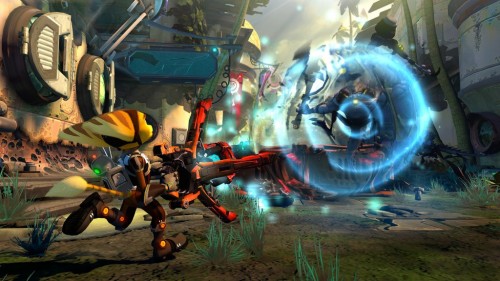 As of Super Mario 64, gone also was the objective of simply traversing from one section of a level to another. Each map took a lot more effort to create from an art and design perspective, and also took up a lot more memory on the storage media (cartridge, disc, or otherwise). Designers maximized the space created in each of these levels by having a player accomplish different goals in the same area. Some involved creative problem solving, exploration, fulfillment of tasks like collecting tokens (eg Mario 64‘s eight red coins), or reaching a hard-to-get spot. This “collectathon” style of platformer grew old fast, though, and by the time the N64 was on it’s way out games like Donkey Kong 64 had so many collectables that they flooded the screen every time you hit pause.

There is one game, however, that largely bucked this trend – an underappreciated title from a storied franchise. That game is Super Mario Sunshine. By including the (much-scorned) F.L.U.D.D. water pack, Mario is able to hover off the edge of platforms without breaking out the slide rule to calculate where he is going to land. There is some wiggle-room when it comes to the direction you’re jumping  because you can use the hover to redirect your momentum. You can also rescue yourself from certain doom by hovering to safety if you overshoot, or make a stupid mistake. In essence, the designers give you a complex 3D obstacle course to navigate while allowing a wide margin of error. 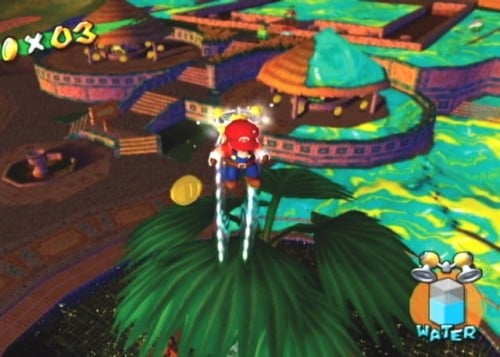 Other games had a similar device, like having a bird stuffed in your backpack at all times in Banjo-Kazooie. Unlike the water pack, though, you can only hover while you are descending. This means you can’t maintain your height should you miss a jump, just glide slowly to safety. You still have to climb back up to where you were when you fell.

In Super Mario Sunshine, though, you have freedom to jump boldly across wide chasms without worrying about plummeting to your doom. You also have the option for replacing your hover nozzle with a jet blast one to propel you quickly upwards in the event you have trouble reaching a taller location. Basically, the game solved the problem of 3D platforming, and should have invited a host of imitators to revive the genre.

But it didn’t. The game was commercially successful, but was received lukewarmly by most gamers I knew. I wasn’t even aware a full Mario title had been released for the Gamecube until the system was on the wane. Most people didn’t have much positive to say about it, either. I think this was because of the poor structure overall; there wasn’t as much a sense of incremental gains as in titles like Mario 64 or DK 64. Players received a steady stream of abilities in the first half, then were left mostly on their own to figure out where the last shine sprites were in the second. The level design also neglected to consistently wow players with successively more impressive new areas.

Well, I still say that this was a brilliant idea that was squandered by the development community, especially Nintendo. There was never an imitation of the game, much less a sequel. Platformers at that point had already drifted away into their respective sub-genres.

Prince of Persia: The Sands of Time is one of the last games I can think of that focuses purely on obstacle traversal and precision jumping, and this was only because they allowed you a literal do-over by rewinding time so you could try it again. This process is fun, but takes some of the challenge out of the platforming prospect. Just imagine how easy this gimmick would have made Super Mario World. Rather than trying to reinvent the wheel and solve the problem anew, developers could have made more titles that focus on keeping you from dying should you make a mistake in the same way that Nintendo did with Mario Sunshine.

Nowadays, first-person shooters are the most popular genre. This trend infects other genres that used to be independent from FPSs, like Skyrim the first-person RPG, or Portal, the first-person puzzle game. I think this is because the dual joystick setup of newer controllers lets you control precisely where you are going and where you are looking independently (even though the mouse has fulfilling this role since Hexen). Instead of trying to branch out and try new things, companies are content to add new wrinkles to a formula that they know is easy to control and design levels for. Even third-person games have mostly become detached-camera version of FPSes like in Dead Space or Gears of War.

I think that if more companies had taken Nintendo’s creative cue, they could break this churning out of recycled games like the umpteenth Call of Duty, Battlefield, or Halo iteration. There would be more diversity when it came to new game designs. Yes, it’d be copying Mario Sunshine to an extent, but that’d be better than copying Doom for twenty solid years.

This doesn’t mean that every game should rip off Mario Sunshine, either . First-person games like Half-Life are still obviously fun, and there’s also plenty of room for realistic third-person games like The Last of Us and Assassin’s Creed where you can only jump a foot or so off the ground and the emphasis is on climbing, but where have all the colorful, imaginatively fanciful games gone since the heyday of the platformer? The mediocre success of Mario Sunshine shouldn’t have been a nail in the coffin, but rather a shot in the arm for Nintendo and others to get the formula right. 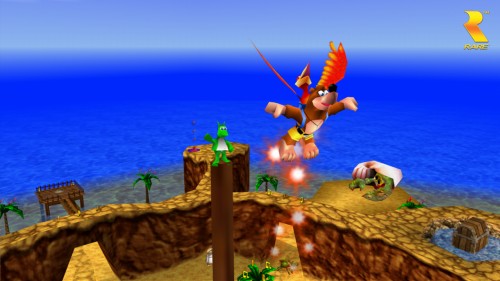 I could personally do without another game like Castlevania Lords of Shadow where you just mash attacks and try to find switches to open doors. I miss the genuinely creative titles full of whimsy like Banjo Kazooie (who deviated to physics-based vehicle puzzles once it hit next-gen) where just moving about and exploring was a joy. I also miss some genuine challenge, rather than jumping through a series of banal hoops. Timing your jumps required muscle memory and dedication, not just a new item or ability that generated eye candy and won the level for you. 3D platformers were some of the last games that had you learn a skill other than pointing and shooting or finding some switch. Bring those games back, please, and let the ingenious control scheme and game mechanics of Super Mario Sunshine be your blueprint. 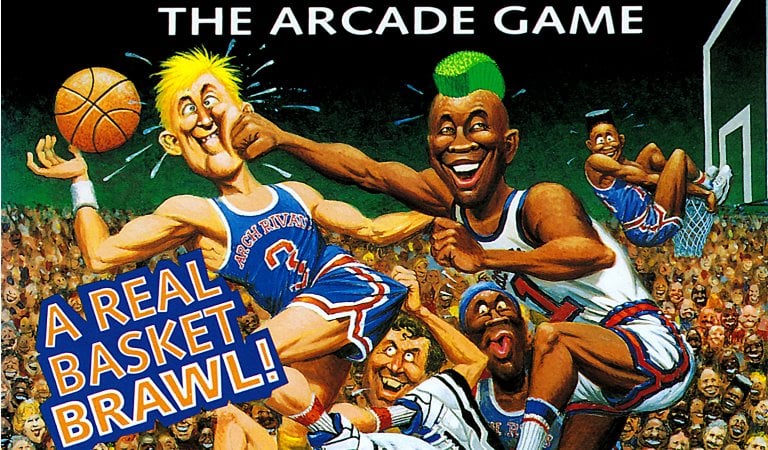