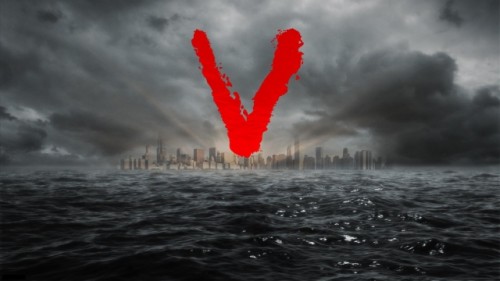 Having just finished my DVRing of the V premiere, I have to say, I’m stunned. Not merely because I enjoyed myself, and am hopeful for the first time about a new show this season, but because of the sheer AMOUNT of stuff that happened in the span of forty minutes.

I went into pilot expecting an intro episode, with about 35 minutes of character development and ten minutes of actual aliens showing up. This was not the case at all, and I have to credit V for one of the best “hook” pilots I’ve ever seen.

The episode opened with a trio of questions: Where were you during JFK’s assassination? (Not born) Where were you during 9/11? (Mrs. Horling’s 10th grade English class) and where were you this morning (Twittering about Kim Kardashian’s Halloween costume). The last question refers to where you would have been had the show’s alien arrival taken place, and thankfully, there’s no long winded set up of where each character was. There’s simply an earthquake, some giant ships and a smiling alien leader named Anna (Inara from Firefly) talking about how she brings peace and good tidings. 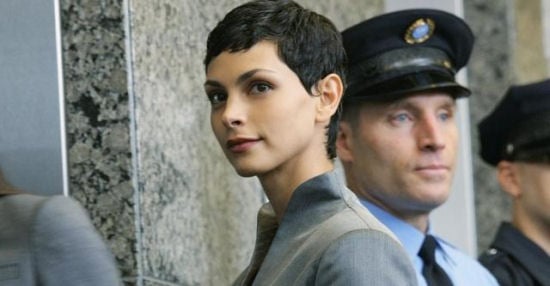 Oh and they’re all super, super hot. People trust hot people and do what they say, that’s just science.

Erica (Juliette from Lost) is an FBI agent who has a son, Tyler, who has turned into a bit of a troublemaker since her recent divorce from her husband. Her partner at the bureau is Dale (Alpha from Dollhouse, or Wash from Firefly if you prefer) and even after the Visitors (Vs) touched down, life goes on as usual at the FBI and they’re working up a lead on a mysterious terror cell whose chatter actually INCREASED once the aliens showed up. Because I mean, even Osama Bin Laden had to drop what he was doing when that happened.

Other players are Father Jack, a priest filling the obligatory “male lead named Jack” role of the show. There’s Ryan, a black guy with a cute girlfriend and a mysterious past. And there’s Chad, a news anchor who has often been passed over by his network in the past, but that all changes once the Vs show up.

Almost immediately, the V’s leader Anna, heads to the UN to tell the world just how much they love us and how they’ll give us all sorts of cool technology if we just let them drink from our oceans a little bit. They start healing people, and are subsequently treated like gods. They even offer to show humans around inside their giant ships, and when Tyler snags a ticket, he meets Lisa (Kara from Smallville), a superhot V recruiter who wants him to join their “peace ambassadors” brigade and spray paint the city with Vs like he’s wearing a Guy Fawkes mask (tell me you got that). 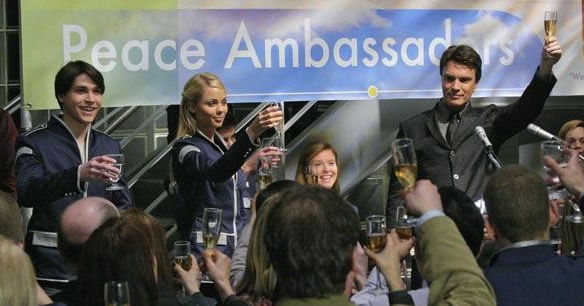 “To potentially banging an alien!”

Now as you might expect from a bunch of people who go out of their way throw out the word “peace” every few seconds, all is not as it seems. And if you think you can’t watch this show because you know the ending of the original miniseries (they’re all actually lizards), it doesn’t matter. No, I did not need a spoiler alert tag there. Why?

By the end of the episode, Erica’s investigation and a member of Father Jack’s flock leads each of them to a secret underground meeting of anti-V conspiracy theorists. Their conspiracy is quickly validated when the meeting is raided by the V who attack with spike shooting drones and razor batons, and it’s revealed that yes, they are lizards, and both Erica’s partner Dale and black guy Ryan are V agents with human skin grown over their scales. Before the meeting was adjourned by mass death, the leader of the group claimed that the V have been here for years, have infiltrated all levels of the military, the government and the rest of society, and revealing themselves is the final stage of their plan, which ends with the extinction of the human race.

I mean dear lord, you could have made an entire season out of this episode alone. It’s the exact opposite of FlashForward, which moves at a snail’s pace to explain a mysterious worldwide event, and I was stunned at where we were by the time V was over.

But the real question is, what now? Where the hell do we go from here? The Vs clearly have something devious planned, but we’re not sure what it is. Who else is a V, and what make the good Vs turn against the bad Vs? These are answers I’m certainly going to be sticking around to find out, and I would probably even do so if I actually had other shows to watch on Tuesday. Which I don’t.

I have no problem with the pace of the pilot being as frantic as it was, and I applaud the show for not dragging its feet. But that being said, the show is clearly not as well written or shot as Lost, though that’s like saying my all-state high school soccer team isn’t as good as Brazil. Hopefully V can keep the momentum of its very well crafted pilot going, and more importantly, hopefully people will but tuning in so we don’t see another high-concept slaughter like Firefly. But this isn’t Fox, so I think we’re safe for at least a full season.

So that’s my take on it, and I now open up the floor to you. What did you think of V? 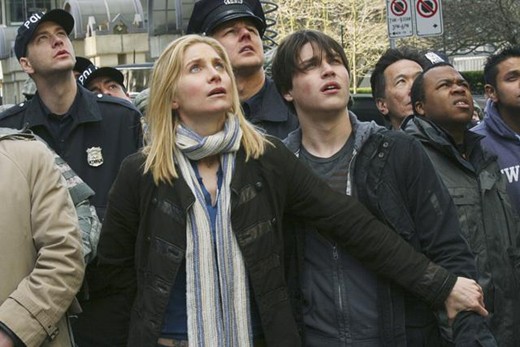 “It’s….an overwhelming premise that threatens to implode on itself to death if it’s not careful!”

Adventure Time meets Normal Rockwell in this lovely art from Creative Outpouring. I think this is the first time I’ve featured them, and I’ve found their site to be full of lots of wonderful stuff… 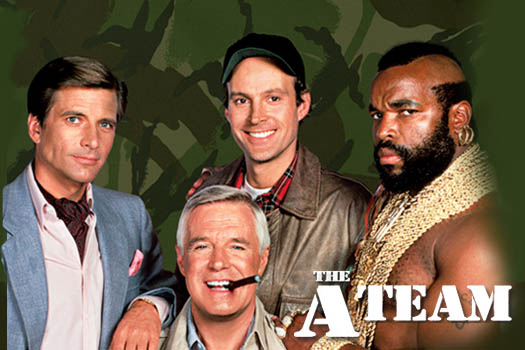 The original A-Team, back when it was a TV show and not a soon-to-be blockbuster film starring UFC fighters and Qui-Gon Jin, had one of the greatest intros of any show ever made. It laid…

Bobby Rubio is an animator that worked at Nickelodeon on The Last Airbender TV series, one of my favorites, and in his spare time he likes to draw awesome stuff like this. As you can…

While I will say that my satellite radio is tuned to EDM-heavy “BPM” on a near-constant basis, I hardly consider myself an expert in the scene. That said, it’s allowed me to at least have some…

Alright so I’m not sure if these two are cosplay Bert and Ernie as: A) Octogenarians B) Inbred Offspring C) Radioactive Mutants But the end result is definitely the most terrifying thing I’ve seen all… 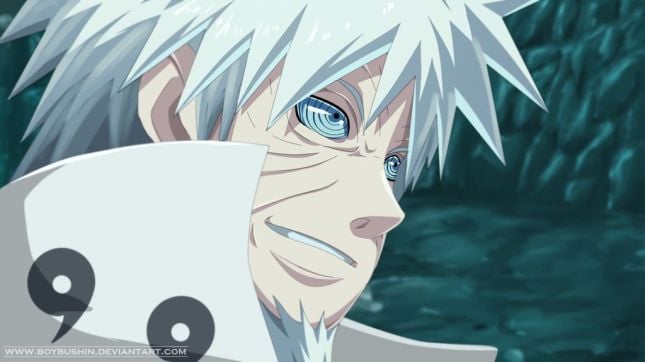 Manga addicts all have one very important thing in common. They must have their daily dose of anime, but it goes far deeper than this. Enthusiasts who live and breathe anime also need to know…