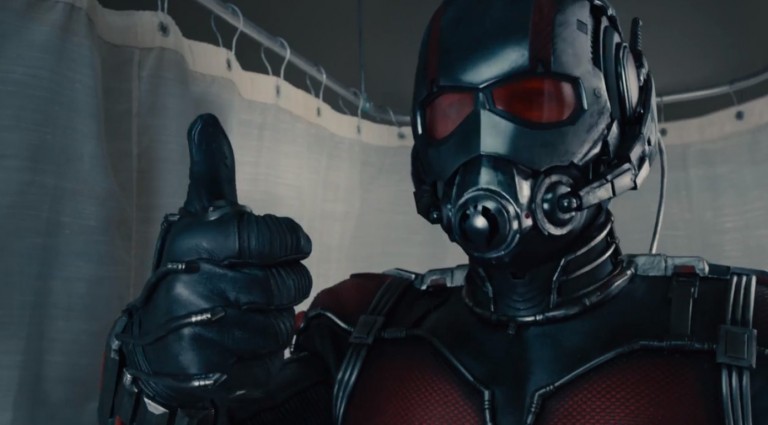 5) Ant-Man – Continuing with our list of the best summer movies of 2015, we come what was probably the biggest question mark going into the blockbuster season.  While there was never really much debate over whether or not people would turn out for an Avengers sequel, whether or not people would buy into Ant-Man – a character with considerably less name-recognition – was another matter entirely.

It’s not like he could fly, control lightning or transform into a giant, radioactive rage monster.  He shrinks.  That’s it.  End of story.

And that’s not even mentioning the movie’s troubled production, resulting in director Edgar Wright (of Cornetto Trilogy fame) being replaced with the guy best known for helming Bring It On.  The thing is, though, that Marvel – and in particular Kevin Feige – has proven their vast propensity for finding the right talent for the right film.  They did it with Iron Man.  They did it with Guardians of the Galaxy.  And now they’ve done it with Ant-Man.

What makes the movie so seamlessly perfect is that it knows exactly what it is.  Despite what it was billed as, it ultimately isn’t a big-scale action film.  It’s a heist movie.  A funny heist movie.  A funny heist movie that is every inch the 90’s styled romp that The Three Musketeers or Tron was.  It had a great, if initially questionable, cast (I’m looking at you Paul Rudd) and an infectiously fun screenplay (courtesy of the indelible Mr. Wright), making it the most pleasant surprise of the season. 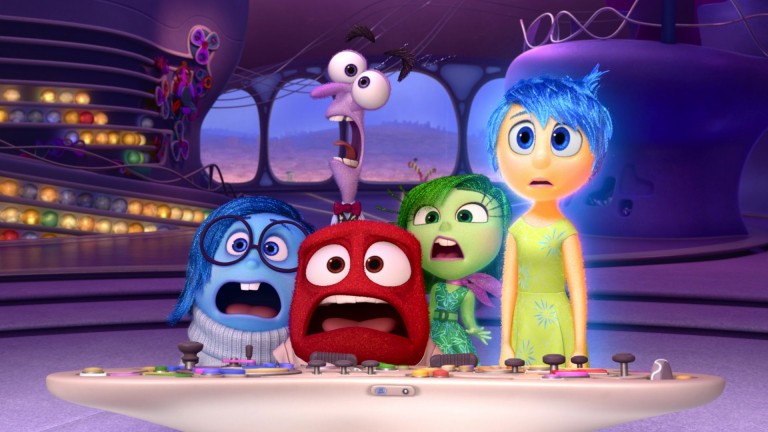 4) Inside Out – Despite their share of misfires in recent years, Pixar has long since proven themselves the premiere authority on animation in the West.  They have just short of Marvel-level uncanniness at producing exceptional narratives that the whole family can enjoy.  The Incredibles, Finding Nemo and the Toy Stories all rank among my very favorite films.  So when I say that Inside Out deservedly ranks among the very best of Pixar’s filmography, I want you to understand exactly what I mean by that.

Inside Out is classic Pixar: an imaginative concept extrapolated into a intricate paracosm.  It’s an epic adventure where Joy and Sadness need to brave the treacherous world of Riley’s mind in order to make her feel anything again, but it’s also a heart-wrenchingly personal story about one girl’s mounting depression at moving to a new city and her inability to communicate her feelings to her parents.

Depression isn’t the absence of Joy nor the presence of Sadness, but the complete inability to feel any emotion.  Joy is a wonderful emotion that helps us carry through the hard times, but so too is Sadness and Anger and Disgust and Fear.  Sadness wasn’t there just to get in the way and make Riley feel bad, but to help her empathize with others and move on from the bad things that happen in life.  The fact that Pixar was able to make a colorful adventure story that clearly spelled this out for their littlest fans is nothing short of astounding.

I am not too proud to admit that more than a couple manly tears were shed by the end of this movie, and I’m not one to cry easily.  Riley’s reunion with her parents – where they fall into each others’ arms, share what they miss about their old home and cry – will inevitably be the most memorable and touching scene from any film this year. 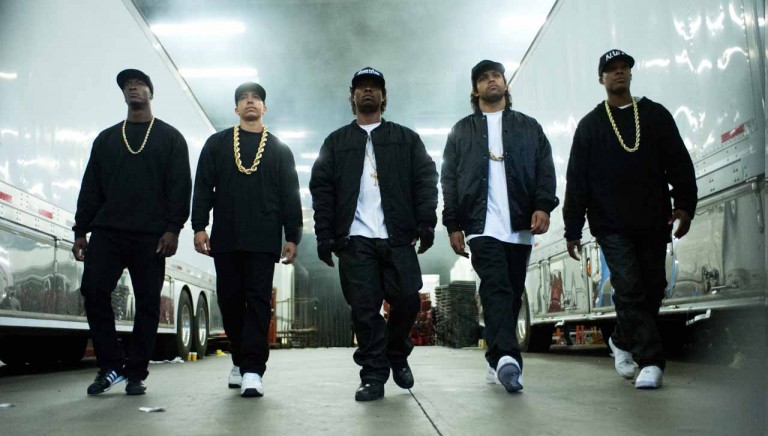 3) Straight Outta Compton – For the longest time, this was not a movie that was on my radar.  Summer is the time for edge-of-your-seat blockbusters and face-melting explosions, not historical biopics and race movies.  Compounding the issue was the fact that I am just about the furthest thing from a rap fan out there.  I had no idea what N.W.A stood for (let alone that it was a music group), the history of the genre nor the astounding number of artists that they would eventually inspire.  All I knew was that it was getting rave reviews and I had some time to kill.

So, as you could probably guess, I was just as shocked by the quality of the film as I was pleased by it.  It proved to be an absolutely riveting story about a group of young men from the wrong side of the tracks, how they (mis)handled their runaway success and the kinds of people that fame would eventually transform them into.

The most amazing this about this movie is that it steadfastly refuses to take sides among its fairly expansive cast.  It would be so easy to vilify any one of the band members – or their seedy manager, or their less than upstanding friends – and cast one or more of them as the blameless victim caught up in a whirlwind of fame and violence that they had no control over.  Instead, the film shows them all for what they really are: people – flawed, broken, sometimes blameless, mostly reprehensible people.

It’s a lesson not just in history, but in culture: in the depravity of human interactions and the still very real hope they hold at changing their lot in life (for better or for worse).  It’s a truly gripping drama that shows you the exact, deplorable context that these men were coming out of while neither condemning nor condoning the actions that they took to escape from it.  Don’t be fooled by its August release date; this movie has “Oscars” written all over it.

2) Mad Max: Fury Road – While I did have high hopes for the belated sequel to 1985’s Beyond Thunderdome, I wasn’t really expecting this to be the second coming of “Mad” Max Rockatansky.  The series had piqued with The Road Warrior and I had every expectation that that’s exactly how it was going to stay.  All I could hope was that Fury Road would clock in as a not-too-distant second.

What I ended up seeing was not only by far the best movie of the franchise (sorry Road Warrior), but what was easily the best action movie of the summer.  Director George Miller completely reimagined his own franchise to create one of the hardest hitting action movies of the last decade.

After the first movie, it was obvious that the film could have just as easily been called “Angry Max.”  It was a low-budget revenge thriller about a man making a bike gang pay for murdering his wife and child.  The post-apocalyptic setting was a complete afterthought, since Miller was unconvinced that audiences would accept the level of violence in the film while still having it set in the present day.  And, honestly, the setting was so surface-level that it could just as easily be overlooked if viewed in isolation of its two sequels (which were actually the ones to develop the idea further than “it’s really, really violent”).

Tom Hardy’s take on the now-iconic character is a total reversal to the Max that we’ve spent upwards of five decades growing to know.  His madness isn’t anger, but insanity, brought on by the murder of his family and the savagery of the wasteland.  He barely speaks during the entire movie, an most of what does come out of his mouth are feral grunts and growls.

Miller exploded his concept of a post-apocalyptic Australia with this film, fueled by a trifecta of Human needs (in this case, water, bullets and diesel).  He gave us one of the most fascinating characters of the year in Furiosa and has promised a considerable deal more of her in the coming sequels (allegedly including the next film, Mad Max: Furiosa).  Of all of this year’s franchise revivals, Mad Max is the one that I’m really pulling for.

1) Avengers: Age of Ultron  – As I’m sure you were able to guess by now, Avengers: Age of Ultron is hands down my favorite movie to come out this summer (and, if I’m being really honest, so far this year).  Despite being a notable step down from 2012’s The Avengers and last year’s Captain America: The Winter Soldier, it absolutely delivered on the promise of a second go-around with everybody’s favorite Marvel-branded heroes.

For all of its bells and whistles, Age of Ultron is basically a massively entertaining retread of The Avengers.  While it further develops Stark’s post-traumatic paranoia, Cap’s moral line in the sand, Banner’s Hulk-inspired angst, Thor’s acclamation to life on Earth and Romanov’s and Barton’s nuanced relationship, it’s still basically the same movie that we got in 2012.  A psychotic villain with daddy issues uses Loki’s Scepter and a vast, technologically advanced army to publicly destroy The Avengers and lay waste to the world.

The strange thing is, though, that this weirdly specific formula works nearly as well the second time around.  Now I’m not saying that there weren’t a few well-deserved groans when Ultron used the scepter in a scene lifted straight from the first movie nor that the darker version of the character that they were advertising was inherently more interesting than the one that we ended up with.  I’m not even saying that the action was as good the second time around.

I’m just saying that it worked, and worked exceptionally well.  The plot was as nuanced as a blockbusting cross-over based on a comic book needed to be.  The action was every bit as exciting as it wanted to be.

As with The Avengers, the focus was always on the characters’ interactions with one another.  This is why the best scenes of the movie don’t involve Hulk duking it out with the Hulkbuster.  What I remember is the endless debate over which one of them – other than Thor – is worthy of wielding Mjolnir.  I remember Aunt Nat playing with Lila and Cooper.  I remember Laura holding up newborn Nathanial Pietro Barton.  I remember Banner’s face when Natasha tells him that he’s not the only monster on the team.

Age of Ultron is further proof that the meta-franchise is more than capable of solving “the Marvel problem:” in that they lack especially memorable or interesting villains.  Loki is one of the most dynamic antagonists that we’ve seen in recent years.  The Mandarin was a intelligent deconstruction of terrorism and international policy.  And now we have Ultron: a Frankenstein’s monster of good intentions and what it really means to have “peace in our time.”

So here we are, waiting for The Knights of Badassdom with bated breath. I love Ryan Kwanten and Peter Dinklage as much as the next nerd girl who likes handsome men, and I’m even more…

When I was a kid, I went to Paris and visited Madame Tussad’s Wax Museum in the city. Yes, there’s a section of celebrity lookalikes and what not, but there’s another section that’s pretty much… 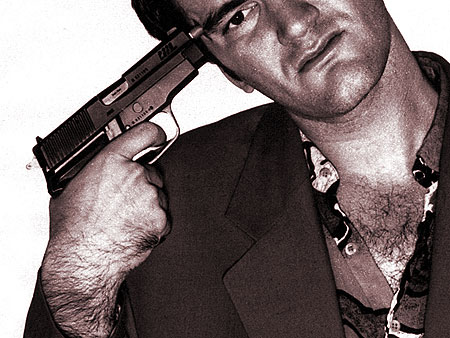 The man who never stops talking, it turns out, actually has quite a lot to say. He may sound incoherent at first glance, but you really listen to Tarantino when he talks, he’s clearly a…

A couple months ago, Remy wrote a piece listing five incredibly bleak films that was—per usual for our Mr. Carreiro—incredibly popular and generated a healthy comments section. One of the commenters, Mutant Turd (sir or…

I very much liked the Batman and Superman face morphs which combined all the past actors who had played each into a singular face, and now the same is being done for Sherlock Holmes and…