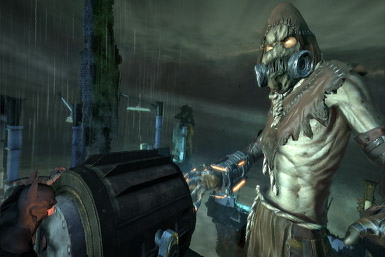 When playing through the first Resident Evil, and the dogs jumped through the window, it scared me. I am pretty sure that moment scared every gamer who played it. But it didn’t “disturb” me. Why? Because, in a survival-horror game, horrifying things are expected. They are the norm, and therefore, okay. But the first time I played through the nightmare level of the first Max Payne game, it messed me all up. Why? Because I just didn’t expect to go to a place that dark in an action game. Realizing it was a Rockstar game, and a crime-noir story, I was a little naive in hindsight, but regardless, here are five moments from non-horror games that I found genuinely unsettling.  In some of these examples, I was just a child when I experienced them, so go easy on me. 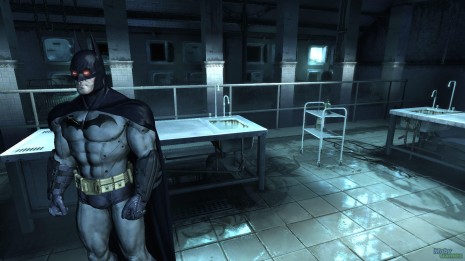 This whole game was a gem ( I am the one person who preferred the “contained” levels of the first game to the “sandbox” gameplay of the second), but man, the Scarecrow scenes in this game are up there with some of my favorite gaming moments of the last decade. He just f*cks your mind so wonderfully and so often throughout the game, it was a blast to never know what to expect. BUT, to go into the morgue, and see the body bags with Bruce’s parents in them. And then to see the body bags do this:

Your dead parents talking to you and telling you that you failed them is some heavy stuff, especially for a video game.

I wasn’t the only person blown away and slightly creeped out by this, was I? Never had Batman’s world been so perfectly represented, and never had we been given greater insight into the mind of a wounded man than in that single moment. Makes it easy to forgive that final boss battle with MEGAJOKER. 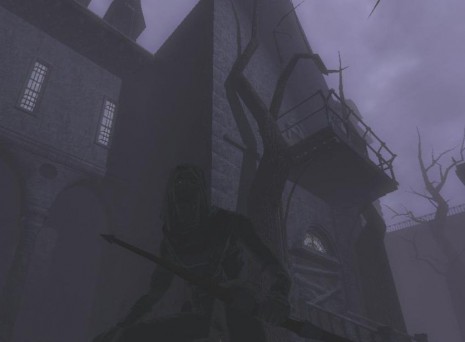 The world is in desperate need for a new Thief game. Dishonored may be as close as we come for awhile, though.

I think The Cradle level of the Thief: Dark Shadows game was the first example of me noticing how perfect sound design could truly accentuate a game, especially in atmosphere. Thief was a stealth game, and it was a blast. There was a level called The Cathedral in the first Thief that was creepy, but The Cradle from Deadly Shadows took it to new levels.

The very core concept of the game is adrenaline inducing: breaking into various places at night, stealing precious jewels and other such sundries, and be rewarded for how well you pulled it all off without being caught. But man, you get to the Cradle level and suddenly things take a serious turn. You see, The Cradle was part orphanage, part insane asylum, and they would move the two populations about the building accordingly, so they would not be intermingling. So it is kind of like the “Whorephanage” from Black Dynamite, except instead of whores, it was insane people.

The whole level you hear things, whispering, things moving in other rooms, and it builds and builds until you are literally jumping at the sounds you are hearing within your own room. Here, check it out:

Games like Slender and Amnesia play off this type of level and sound design, but understand, this game was years earlier, and this was just one aspect of the game.

To this day, I have nightmares about a place like this. Ofcourse, in horror and nightmares, everything looks like a “place like this”. Still though, The Cradle really stuck with me, even after all these years. 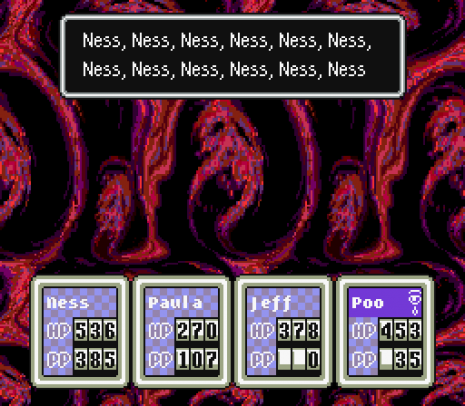 All that’s missing is him tugging on your pant leg for ten minutes and he’s the little brother you never had.

I know this moment from the ending of Earthbound messed with quite a few gamer’s heads, but I don’t think I have ever spoken of it before now. I think I was trying to keep it repressed. The thing is, if you looked at Earthbound on the surface, it was a cute game. It really was. I mean, there were some hints that stuff may get twisted, but not as utterly twisted as it gets in that final encounter with Giygas.

From the things he says, to the way he looks (some think he looks like an unborn fetus in the womb. I see a face, but hey, it’s all Rorschach, baby) everything about him is just wrong, and you FEEL it when you battle him. His speech to you is one of the creepiest moments from my childhood, honestly, and I am pretty sure I was in my teens, so that’s saying something. Come to find out, Giygas was inspired by a rape scene in a film that Shigesato Itoi mistakenly walked into as a child. No, seriously.  Finding that out somehow makes sense and makes Giygas even more disturbing, all at once. 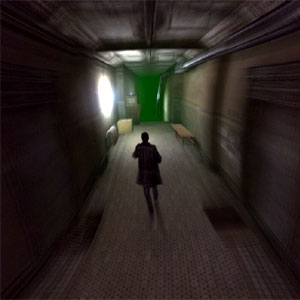 “Max, run toward the vomit-colored light….”

*I recommend you read the next paragraph out-loud, in a gravely voice.

I was just a kid, for Christ’s sake. How was I supposed to know how heavy it would all lay on me? I sat there, controller in hand, shaking from the withdrawals.  The empty glass from the table beside my bed mocked me. Wait, how did this happen? One minute, I was running along, stomping on mushrooms in some pretty-pastel-world. And now, here I was, mixed up with some bad men, my family dead because I wasn’t man enough, and a whole shitload of questions I needed answers to. But where’s a kid with a controller supposed to find answers only meant for an adult? In video games, that’s where.  I took one last drag off the cigarette, now burning down to the filter, and I hit “start”, knowing I would never be a child again.

Alright, I know you guys hate when I go all “concept” on you, so I’ll stop that, but I think you get my drift. I was just a kid, and suddenly, I am playing a game where my wife and baby are dead, and I have no idea why. It was dark enough to deal with as is, but then, they threw the nightmare level in and just really screwed up my tender mind. I mean, check it out for yourself:

Alright, I know it looks rigid and a little bit silly now, but when I first played this, it really freaked me out.

I still think the visuals are wonderfully distorting, albeit a bit crude. It was a very “adult” game, which would be the thing Rockstar would come to be known for, but at the time, I hadn’t played anything like it. Even with two sequels under its belt, nothing has impacted me like the first game, just from a storytelling perspective. 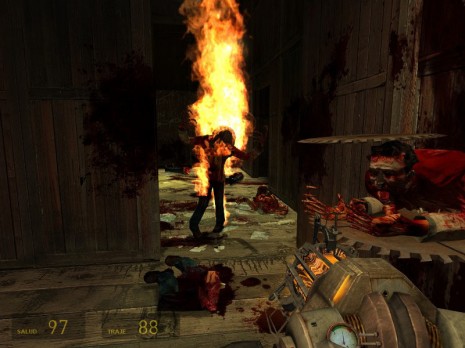 I couldn’t believe they got Richard Pryor to be in the game.

I know the Half Life series has some scary and tense moments, but I think that the tension and mood set in the Ravenholm level is one of the single greatest horror levels to any game ever. And I am pretty sure I have played every survival horror game ever. That is not me bragging, that is me sounding sad. Still, though, for a game that is NOT horror to get one single level so right was just amazing to me. I played Half Life 2 on the PC (like it was meant to be played, IMO), and I just kept reloading the Ravenholm level, over and over. I just didn’t want to stop playing it.

From the freedom given to the player thanks to the “gravity gun”, every single enemy in that section of the game is a blast to take out. Man, I used those saw blades over and over. It was like, with that single level, gaming was everything it was supposed to be again. Fun and badass. And wouldn’t you know it, a little bit creepy. The whole town just feels foreboding, and it was a gaming experience very few gamers have soon forgotten.

Every single water level in every game ever: Seriously, the music changes, and you always feel like you are about to die. From Sonic to Mario, nothing messes me up like a water level.

Metal Gear Solid: Psycho Mantis creeped me out by reading my memory card. My mind couldn’t grasp that at such a young age. I felt violated.

Bioshock: The Big Daddies can muster an almost irrational fear in me when I first hear or see them. 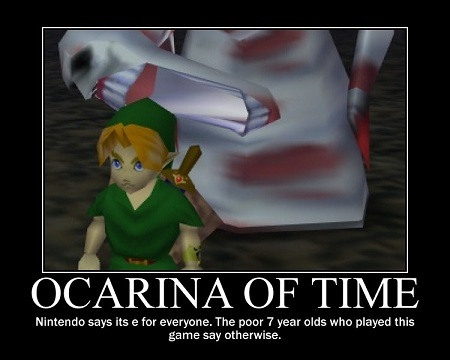 7 year olds? I was twice that old and still crapped my pants.

(click to enlarge) On the left: Anna Chapman, accused Russian spy. On the right: Kaylee Frye (Jewel Staite) of Firefly. Kaylee, say it ain’t so! How could you betray your people like this? I know…

(click for full size) Jeff Victor, why are you so fantastic? Hunting through his site, I think I’m going to have to do a grand feature on this guy at some point, but for now…

Sometimes I feel like I’m getting too old to decorate my room with movie posters, despite the fact that I do this for a living. But then I change my mind when I think, “what…

When is a dilemma not a dilemma? When the answer is obvious. The driving device behind The Dilemma is that Vince Vaughn is wrestling with the issue of whether or not to tell his best friend…

(click to enlarge) I’m not exactly sure who the type of person is who remembers to bring a Darth Vader helmet to a wedding, but much thanks to whoever did so for this rather excellent…

httpv://www.youtube.com/watch?v=t10mNXtfdUw The Oscars this year were…odd in their attempt to pay tribute to James Bond films after fifty years of their existence. I heard that they were going to assemble all six Bonds on stage…