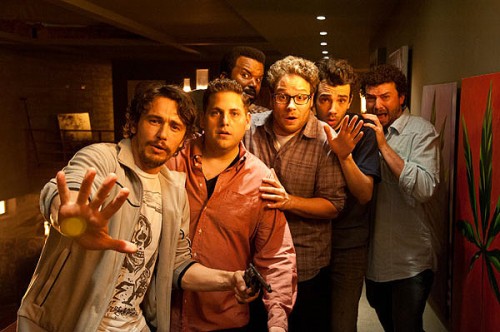 So it’s really going to take something special to jar us out of apocalypse fatigue, and This is the End aims to do just that by making light of the death and destruction that accompany the end of the world.

This easily could have gone awry. It could have been something like Apocalypse Movie, a Scary Movie spin-off I’m stunned doesn’t exist yet, full of obvious jokes and nonsensical humor. Parody is a tricky thing and it easily can go wrong.

Hollywood needed to put their best men on it, so they did. All of them.

Both the breadth of the cast of This is the End, and the concept of the movie they’re starring in are impressive. Actors often play themselves in movies for funny cameos, but I’m racking my brain and can’t think of another non-documentary film that was entirely made up of actors playing themselves like we see here.

Jay Baruchel is in town, visiting his good buddy Seth Rogen in LA. After smoking a bunch of weed (obviously), Rogen wants to go to a party at James Franco’s new fortress of a house. There they find a whole host of actors and actresses who are either one or two degrees away from Franco, based on the movies he and his friends are in. The cameos are almost too numerous to count between Mindy Kaling, Aziz Ansari, Jason Segel, Kevin Hart, Martin Starr, Chris Mintz-Plasse and a show stealing five minute performance from cokehead Michael Cera. 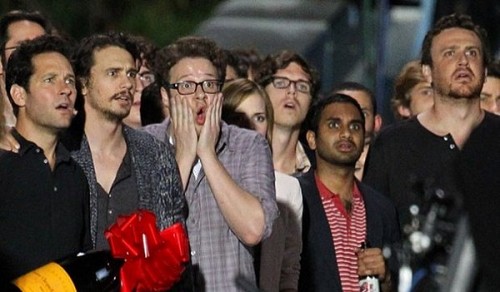 Wait, is that Paul Rudd or am I hallucinating?

And then they all die.

The apocalypse happens, and in this case it’s not aliens or zombies or Roland Emmerich destroying the world. Rather, this is the biblical end times, complete with demons and sinkholes that run straight into hell, swallowing up literally everyone I’ve just mentioned outside of Franco, Baruchel and Rogen.

The remaining cast after the dust settles are the those three plus Jonah Hill, Craig Robinson and Danny McBride. The six of them quickly understand that they must barricade themselves into Franco’s fortress of a house and start rationing the food and water in order to survive the end times.

Though all the actors are appearing as themselves here, they’re obviously amplified caricatures of themselves. Franco is a borderline creepy egomaniac. Jonah Hill is a friendly to the point of personality disorder. McBride is a crude, psychopath, and so on. Seth and Jay are the “normal” ones, but even they aren’t quite really themselves.

After disaster strikes the middle of the film is about the group dynamics that form during crisis between the group. Jay is Seth’s oldest friend, but hates his “new” crew made up of the other guys. James Franco wants to be Seth’s BFF over Jay. McBride wants to break every rule the house establishes, and things go to hell quickly, both literally and figuratively. 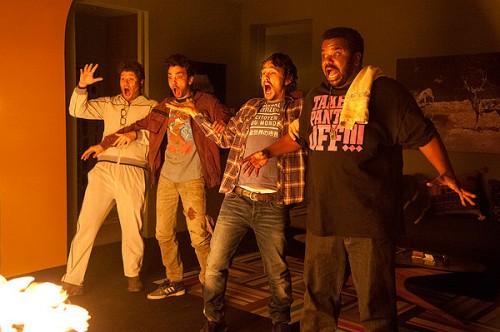 It’s funny. It’s just really damn funny. Granted it’s a stoner comedy with plenty of dick jokes, so that sort of has to be your thing, but for those who don’t mind, it’s going to be pretty great. I more so enjoyed the references to everyone’s films as they lambast each other once the group starts to break apart. When they get bored, they shoot a sweded trailer for Pineapple Express 2. Moments like that is amazing.

The film takes a bunch of guys who are all friends in real life, and locks them in a room for an hour and a half. The result really couldn’t not be hilarious, and I imagine there’s about three extra hours of outtakes that could have made it into the film. I will say that Jay Baruchel seems out of place here, or at least the caricatured version of him does. He’s the closest thing the film has to a straight man, but he just comes off as a jerk most of the time, which isn’t a very desired trait in a protagonist. Even when it’s just a joke.

This is the End can start to drag in the middle a bit, when the most pressing problem is attempting to find additional water, but it’s worth the wait until the film picks back up again. The last third of the movie is just completely flat-out bonkers between demonic possession, Hermione Granger and a grand finale that might actually be the best ending to a comedy I’ve ever seen. Talk about ending on a high note.

This was both an easy and hard film to make. Easy because these guys are inherently hilarious, hard because this concept really could have been done poorly. Lucky for us, it wasn’t, and if you’re a fan of any one of the actors involved, or being entertained in general, I highly recommend you check it out.