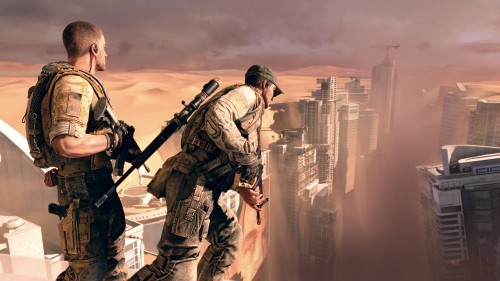 “The horror, the horror”

It’s a phrase that’s stuck with me ever since I first read Joseph Conrad’s Heart of Darkness, and then saw its subsequent film adaptation, Francis Ford Coppola’s Apocalypse Now. Here, it frequently was on my mind as I wandered around the bloodied streets of a deserted Dubai in Spec Ops: The Line, which has now given us the next evolution of Conrad’s story.

It might be hard to understand what’s so special about The Line when you first start to play. For a game that has reviewers bowing down to it, and has even the most cynical among them declaring it game of the year, you might be a bit confused in the first hour or so.

Why? Well, you’re playing a relatively mundane third person shooter with gameplay far sloppier than Uncharted and characters less interesting. How could such a game be the chosen one to restore everyone’s faith that shooters still can break out of their molds and actually contribute something meaningful toward the evolution of the industry? 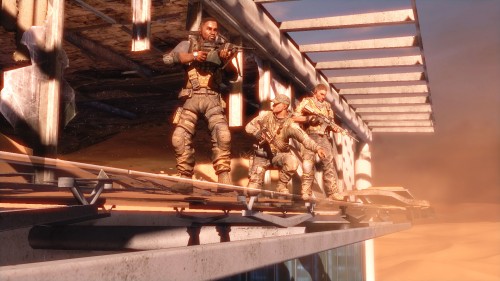 It’s probably best compared to Mass Effect in this regard, another mediocre shooter from a gameplay perspective, but it’s the story that everyone tunes in for. Here, you don’t really understand that you’re playing a video game equivalent of Heart of Darkness for a little while, but once that realization sets in, everything goes to hell rather quickly.

You are Martin Walker, a Delta Force operative sent into to investigate a disaster in the desert. Dubai, the richest city in the world has been devastated by a catastrophic series of sandstorms that has left nearly the entire city buried. A battalion, the Damned 33rd, has already been sent in, but all contact has been lost with the troops and their leader, your former commander Col. Konrad. If I’d remembered character names from the original story correctly, I might have noticed the combination between “Conrad” and “Kurtz” right off the bat. I was a bit annoyed when I did eventually realize that I was playing Heart of Darkness: The Game, but eventually I gave up and immersed myself into it, and I’m glad I did.

Something is off, that much is clear when the 33rd troops begin firing on you as you investigate the city. Defying orders to merely do recon and report back, Walker plunges into the carnage and finds a city where bodies hang from streetlights and dissenting soldiers have been lined up and executed. Twisted graffiti is sprayed on the walls and a journalist-turned-local DJ, the Radioman, taunts you with music as he sends 33rd troops your way, another pull from the original story. 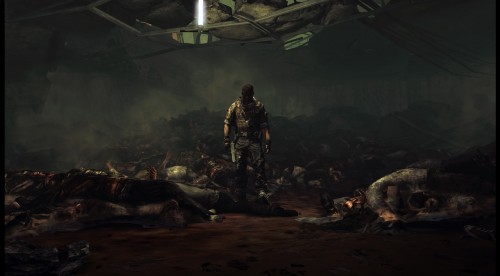 A lovely moonlit stroll in a mass grave.

We’ve all played war games before, but few have ever made us think about our actions while playing them. The last time we did so was probably Modern Warfare 2’s famous No Russian level, where you were tasked with massacring a mall of shoppers as part of an undercover operation to infiltrate a terrorist cell.

That feeling exists nearly through this entire game, as the only enemies you’re ever shooting are American troops, and on occasion, armed or unarmed civilians, depending on the scenario you’re presented. Yes, the troops are crazy, and the civilians riotous, but it’s clear there’s something eating away at your character’s soul as you progress, and possibly your own if you consider the implications of your actions.

The game chronicles your progression toward madness in interesting ways. One of my favorite had to be when you notice that in the beginning, your character marks a kill with a simple “he’s down,” or some other quick phrase. But in the last few levels as you get closer to Konrad? You start shouting “enemy is fucking dead!”after each kill as your squadmates start to look at you funny. 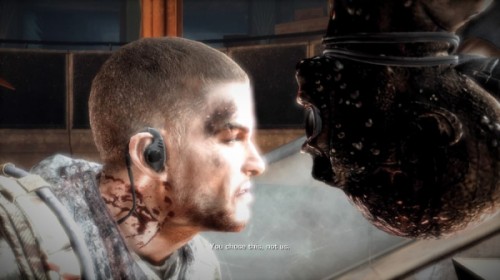 “I CAN’T HEAR YOU OVER THE SOUND OF YOU BEING DEAD!”

That said, the narrative can be a touch heavy handed at times too. I didn’t really appreciate when the loading screen tips starting shifting to advice about grenade throwing to phrases like “Do you feel like a hero yet?” or “Your actions have decimated what’s left of Dubai.” This is in strict violation of the useful “show, not tell” school of good storytelling, and they could have dialed it back just a bit. In this regard the game reinforces the idea that gamers are on a lower mental plane and therefore need a big sign telling them, “THINK ABOUT IT, YOU’RE REALLY THE BAD GUY HERE” instead of letting us figure it out for ourselves. It’s like reading the Sparknotes instead of the book.

But it’s a war game that wants you to think about why you play war games, and that’s far more introspection than other games force upon you. As the loading screen suggests, you do feel like a hero, but at one point does that feeling shift from valor into bloodlust? Where is the titular “Line” to be drawn?

This said, the story isn’t flawless. The idea that Dubai could get swallowed by a sandstorm and the international response would be to send in one battalion of troops to investigate is absurd, as is the idea that these troops wouldn’t be able to make any sort of contact with the outside world. Unless you assume that the rest of the world is in a similarly apocalyptic state, it doesn’t make much sense, and that’s never revealed through gameplay. Also unknown is how a sandstorm and occupation takes Dubai, a city of 2 million people, down to just 5,000 citizens by the time you arrive. 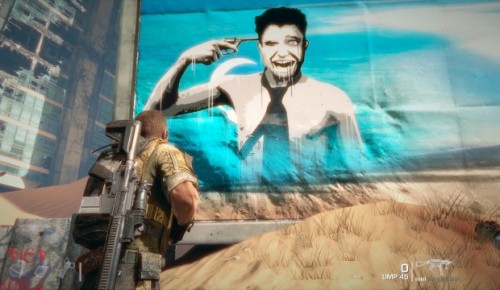 “Man, Banksy really gets around.”

Character deaths aren’t handled very well, and I can’t tell if any choice I made in the game would have made them a bit more coherent. The ending is interesting, but it pulls the “well, it’s open to interpretation” card that too many stories use when they don’t want to risk making a hard call when it comes to a plot. The story deviates from past iterations of the concept to be sure, but I don’t think it’s an improvement.

And as I’ve already mentioned, the gameplay isn’t great. It feels like a less strategic version of Uncharted, even if you’re also controlling a protagonist voiced by Nolan North. I remember planning out each encounter in Uncharted like it was a puzzle. “I need to kill two snipers, one heavy and two RPGs as my cover is being blown to bits.” But in The Line, cover is much more sturdy, and there’s no dive-rolling allowed. Survival, 90% of  the time, merely depends on how greedy you get when you pop out of cover to shoot enemies. The AI isn’t nearly as adaptable as other games, and you’ll almost never be flanked.

But the ruined Dubai is gorgeous, despite its implausibility, and the story is one that will stay with you for some time after you’re done as you decide how the interpret what you’ve just experienced. It may not be the greatest game of the year, but it’s certainly the best story I’ve ever found in a shooter campaign, and that alone makes it a must play.

The Line makes an argument that a video game can take on the themes found in great literature and great film with just as much enthusiasm. Whether it’s as effective as either of its predecessors can be debated, but the advantage of gaming is that it’s forcing you not just to observe these terrible actions, but live them yourself with your finger on the trigger. By the end, it won’t be you watching Konrad utter “the horror, the horror,” it’ll be you saying it yourself.