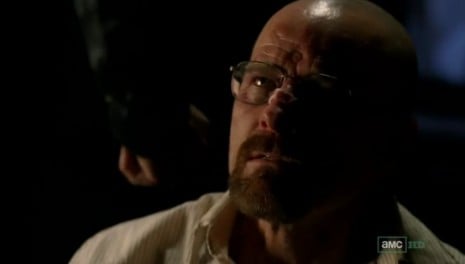 God damn, it’s good to be reminded why I love Breaking Bad again.

Through most of this season I lamented that the show was meandering around without a particular purpose in mind, but now, at the end, we finally have an exciting conclusion on our hands, and one that looks like it might live up to what we’ve come to expect from the series.

I was reminded last night of the very first episode of the show, where Walt is in such a place of despair and hopeless that he walks down the freeway in his underwear, gun in hand as sirens approach. There was a similar feeling as he was holed up in his house, clutching his gun and waiting for the inevitable.

But like the first episode, Walt’s desperation manages to turn itself around, this time thanks to a misstep from Gus that unravels all the work he’s put into grooming Jesse this season. He’s been physically manipulated (the staged robbery he fought off) and emotionally manipulated (Gus’s “I believe in you” reassurances), but now Gus miscalculated just one thing that threw off everything he was trying to achieve. 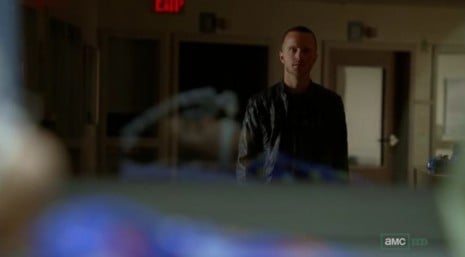 I have mixed feelings about how this all went down. On one hand, it was cool to see that Gus had been planning this all along. The scene with Walt and Jesse in his house with the barrel of the gun pressed against Walt’s head was one of the most tense in the show’s history. Even if we knew there was no way that trigger was being pulled, the intensely emotional performances from Aaron Paul and Bryan Cranston made it look like it was a real possibility. The way Walt explained things, the plan did sound rather brilliant, as Gus had finally devised a way to give Jesse cause to not only want Walt dead, but even take care of it himself. A genius maneuver indeed.

Did Gus really think that Walt couldn’t explain himself out of this situation? Walt might have issues with Jesse, but Jesse knows Walt enough to know that he would never poison a little kid for petty revenge. Gus on the other hand? He totally would, a fact Walt himself brings up. In fact, the second I heard something happened to the kid, I thought it was Gus trying to teach Jesse a lesson (albeit an ill-conceived one) via his recent “appropriate response” comment, and I thought that’s where Jesse’s mind would jump as well. Also, with the two of them not speaking, what are the chances Walt would be able to get the Ricin away from Jesse so that Jesse believed that’s what happened? 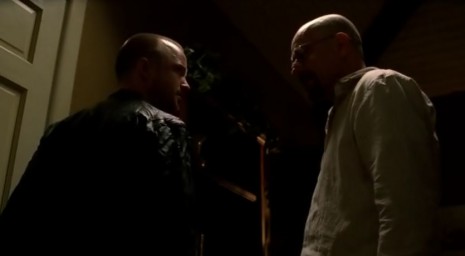 What better way to reunite two people who hate each other than kill a kid one loves and blame the other for it?

This was just too risky for Gus. It makes for good TV I suppose, as it got our boys on the same team again, but it doesn’t really make a lot of sense when you think it through. I guess he had three options. Leave Walt alive, which would satisfy Jesse but there’s a very good chance Walt would flip to the DEA. He could overtly kill Walt, and have to deal with Jesse, but what’s he going to do, quit? Or there’s this third elaborate plan that involves attempting to kill someone Jesse truly loves and somehow pinning it on Walt who is A) not the revenge for revenge’s sake type and B) would never get a little kid hurt doing so. When that backfires, you now not only have no cooks to make the blue, but Jesse and Walt gunning for you, who have shown they can be creative when they need to. If Mike was around, I bet he would have told Gus he was being an idiot.

Part of my problem with the last few episodes, exciting as they have been, as they completely fly in the face of the characterization of Gus we’ve known so far. The man takes NO risks. He works as a manager of a chicken joint while driving an incredibly old car. He didn’t even want to associate with Walt because of Jesse being unstable at one point. But between his insanely risky cartel poisoning plan, and now this gamble to turn Jesse against Walt, he’s taking HUGE risks that are totally outside the character that’s been built up over the last two seasons.

Fortunately for Gus, one of his superpowers appears to be spidey sense which he uses figure out what’s going on. I’m still trying to process that last scene where he suddenly realizes he’s in danger despite no actual clues to that effect. I know Breaking Bad is a show of subtleties, so please explain to me if I missed something. Did Jesse say something suspicious? Was there something suspicious about the car or garage in particular? Because if all of a sudden Gus just happened to believe that someone planted a bomb on his car after a ten minute hospital visit, that’s kind of bullshit. 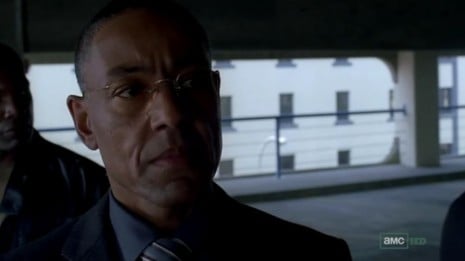 In any case, Walt and Jesse will apparently have to think of a new plan, and now they’ve lost the element of surprise, which is what they had going for them. I believe next week is the grand finale, and if no one ends up dead, it’s going to be a disappointment. I think Gus will somehow die for sure, but it would be nice if the show had the balls to kill off a secondary character as well, which would mean probably a member of Walt’s family. Will they cross that line? For a show that’s constantly pushing the envelope, they sure don’t like killing major characters off.

I’m just happy that after an entire season, Walt and Jesse are fully cooperating again, and this time I don’t think Gus has any way to break them apart. Next week should be a tense finale, and if there’s some sort of giant cliffhanger, that’s going to be  rather upsetting. Just finish up this season’s story with a bang, and we’ll start anew next year for one last season of madness.

Update: And thanks to all of you, I am now convinced Walt might have actually done it. I am not smart enough to watch this show.