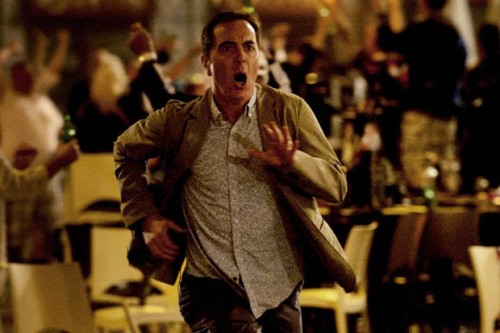 No one does brilliant but depressing and bleak drama like the BBC, and their new show,The Missing, certainly fits the bill. The Missing revolves around Tony (James Nesbitt) and Emily (Frances O’Connor) who are dealing with the loss of their son, Oliver (Oliver Hunt), who was abducted during a holiday to France eight years ago. Even if you’ve never been through the horrifying experience, which is unimaginable to most, everyone still knows that it’s the worse thing that could happen to someone. Unfortunately for us cases like this happen all the time and often have no resolution, just like The Missing. It reminded me a lot of Madeleine McCann, Ben Needham and many other children that have gone missing over the years and although it was upsetting to watch it was still very compelling.

During the opening of the first episode we see a disheveled and quite visibly distraught Tony in present day who is unable to let go of the son he has lost. Although eight years have passed he still believes that his son is out there somewhere and he attempts to find clues, no matter how little they are, in an attempt to find out what happened. This time he finds a picture of a boy wearing a scarf that he believes belongs to Oliver and decides to go back to France to try and track down the boy. Yes, it seems like a flimsy lead, it was just a yellow scarf with some initials on it and there could be many just like it but he went anyway because he has to try, and we find out this isn’t the first time. There have been many instances like this for which he has traveled back, so many that the police tend to disregard what he says and send him on his way. Yet he still tries and I think his desperation truly shows a fathers love, it is heartbreaking. James Nesbitt excels in The Missing, I honestly think that it’s the role of his career and hope that this is what he’s known for rather than Cold Feet and The Hobbit. I’m in awe of the raw emotions I see flickering through his face throughout the hour and I’ve only seen him in the first outing, lord knows what we’ll see from him in the following episodes.

During Tony’s investigation in France he meets with Julien (Tcheky Karyo), the detective that was investigating the case at the time of Oliver’s kidnapping. Julien assumes that his new clue is another false alarm and advises Tony to go home, but decides on investigating it himself as he believes it may have merit. This is quite interesting turn for him because in the past he said “Sadly, we find him immediately or not at all”, which showed his harsh reality on the cases of missing children. Something in the eight years that have passed must have happened to him if he is still looking into finding Oliver and hopefully the upcoming episodes will explore it. Together they attempt to trace the scarf back to it’s origin and it’s quite something seeing how accommodating the people that they interact with on this mission are and shows the good in humanity, especially after Tony is ignored by pedestrians on the streets of France when he is pleading for their help. Tony could be a raving lunatic and an inconvenience in their lives but they take pity and they help in any way that they can. Their search isn’t in vein as they do find a solid lead eight years after Oliver’s disappearance and it renews hope.

While Tony is still trying to chase down leads Emily, his now ex-wife, is attempting to piece her life back together and is engaged with a step son. The juxtaposition of the former couple is initially quite evident with Tony clinging onto the memory of Oliver and Emily trying everything to forget him, even giving away his old toys. I don’t know quite how I’d react in Emily’s situation but I did find her behaviour a bit bizarre myself, especially her ignoring Tony’s phone calls when he’s trying to tell her “I found something”. I understand her trying to move on and attempt to find some sort of happiness after the tragedy but it seemed like she was attempting to remove every aspect of Oliver from his life. That is until she sent a Rottweiler reporter after Tony to find out what he knows, which shows no matter what she does or the facade she puts on she can’t escape what has happened to her, she just can’t deal with not knowing. No matter how happy she pretends to be on the outside she is as broken as Tony, they may seem completely different but they are not.

The Missing jumps back and forth between two periods of time, the present day when Tony is trying to renew the investigation and eight years ago, when Oliver disappeared. It would have been enough just seeing the aftermath of the disappearance but because the audience get to see Tony losing him and the hysteria afterwards as well it feels like two shows in one. We get to see the attitude of the public as time goes on, plenty of volunteers when Oliver first disappears but later on he’s almost forgotten about by everyone but his family, the investigator and a few kind strangers. We are also introduced the supporting characters tied to the investigation including Ziane (Saïd Taghmaoui) who is the first detective to respond and who harbours a secret himself, Laurence (Émilie Dequenne) a uniformed police officer who the family chose to keep close by and Malik (Arsher Ali) an ambitious reporter who wants details on the case. The main story within the series is finding out what happened to Oliver but it will be brilliant to watch the other characters stories unfold over the next seven episodes as well.

The first episode was fascinating and at times emotionally overwhelming but I can’t wait till the next. I’ve heard comparisons to Broadchurch which I adored but I think the show is miles better, I’d place money on this being the best show that’s been broadcast this year. Scratch that, I think it’ll work out to be one of the best dramas that have aired in the past few years so I urge you all to give it a try. At times it is gut wrenching but the show is beautifully acted, brilliantly written and directed to perfection so I highly doubt you’ll regret watching it. Check out the trailer below.

The Missing continues on BBC One next Tuesday at 9pm and premieres on STARZ in the US on November 15th.