Well, that happened.  After all the praise I heaped on the show, and after the first few episodes of Season 3 were quite good (Episode 2, “Run,” was a brilliant piece of television), as The Newsroom aired its penultimate episode, I felt like I was left holding the bag.

I’m glad my column comes out Thursday, because if I had tried to write this article on Monday, the day after “Oh Shenandoah” aired, it would have been nonsensical rants about how Toby ruins everything (The Office alumnus Paul Lieberstein directed the episode).

I don’t have to write that piece anymore.  It’s been done, quite thoroughly.

Pajiba called it “One dumb, excruciatingly tone-deaf episode of television.”  The Onion AV Club gave it a D- and led off its review with the caption, “Oh, brother.”  The Atlantic said there was “nothing good” about the episode, and I’m forced to agree.

Where do we go from here?  One episode left.  Is there any hope?  Read on to find out. (*Spoilers up to and including episode 5 ahead*)

NO, THERE IS NO HOPE.

That’s what my face looked like, too, after Charlie died in perhaps the stupidest way possible.  Kill off a character leading up to the series finale, fine.  Even a character as awesome as Charlie.  But there had better be a damn payoff.  Charlie spent the last few episodes kowtowing to Our New Douchebag Overlord Lucas Pruit, completely compromising his ideals (and, from the meta point of view, the premise of the show, which was “highly talented yet flawed characters try to do the news right”), doing a complete 180 on his personality, and then he dies.

Let’s go now to Charlie Skinner for a dramatic re-enactment of what I did after that episode drew to a close.

We won’t even get into the other problems with the episode, like the eye-rollingly dumb “Will hallucinates his dead father” plot, a page taken straight out of the worst episode of Sorkin’s Studio 60, where Matt Albie hallucinates a fictional version of himself. 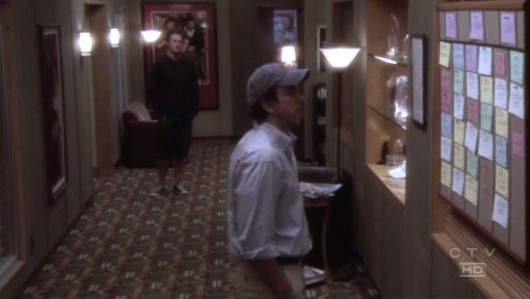 And we also won’t go into the whole Jim/Maggie thing other than to say that I hope the first scene in the finale is the news team finding out that the plane Jim and Maggie were on at the end of Episode 5 crashed and they’re dead.  Triple funeral time.

We’ll skip over all that, and we’ll ask ourselves: okay, what now?  The internet is quick to pour gasoline on a fire, and the response to this episode was a near-universal panning of it.  What’s left?  What do I want out of the finale?  What can we salvage from this garbage fire?

– A satisfying resolution to Neil’s storyline.  From the beginning of the series, he’s constantly going down these rabbit holes, one step away from going full-on Fox Mulder.  Reality came crashing down on him in the form of the FBI.  He had to flee the country.  I’d like to see him come back and see some kind of gesture of completion to his character.  He’s grown, reshaped, reformed.  Smarter, still inquisitive but shaded with cynicism.  Grown up.  The best parts of the digital revolution, combined with the pathos and expertise of being in the middle of a real-life shitstorm.

– A positive outcome for Don and Sloan.  They’re the best part about the show, and if it doesn’t end with them getting a happy ending, or at least pointing to one, I’ll be… upset.  I really don’t care what happens to anyone else, and they don’t need to declare their undying love or anything, they just need a moment.  A small moment.  Professionally and personally, coming out of this mess, changed for the better.

– A satisfyingly karmic downfall for Lucas.  That guy is a toolshed, and I hope Reese Lansing destroys him.

– Seriously.  This last episode has pretty much reduced “things I care about on The Newsroom” to three things.  Really just one thing.  I could live without 1 and 3.

Come Sunday, there will be a reckoning.  Check back next Thursday to see how it all turned out.

httpv://youtu.be/UNbxn-Q587k As I continue my march into the 21st century, I’ve now appeared on my second podcast ever. This time, it’s another reader, one you’ll recognize if you hang around the comment section on the…

Her? Her. I love you, Mae Whitman.

(click to enlarge) From featured-yesterday artist Aled Lewis comes It’s Always Sunny in Philadelphia made over as a beat-em-up Streets of Rage game. You’ll have to click to see all the detail and understand all…

Usually an episode of Game of Thrones will end with a cliffhanger pertaining to someone apparently about to meet their end, or better yet, actually dying. It’s those “gasp” moments that make the show so…