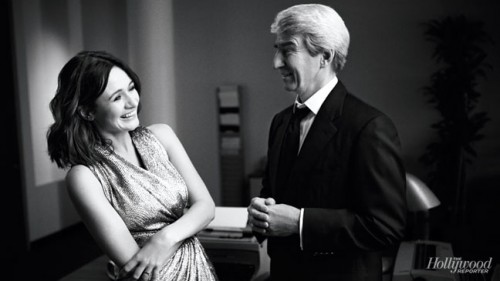 It seems like Aaron Sorkin can’t get a break.  Sports Night got the axe into just its second season, when the characters were really starting to gel, The West Wing was a massive success but Sorkin had to/chose to leave after Season 4 and didn’t get to see it to the finish line.  Studio 60 on the Sunset Strip kind of bombed in the ratings department and only made it one season, despite being (in my opinion) a better show than 90% of what’s on television right now.

It seems like Sorkin has been spinning different versions of the same tale for years now: astoundingly competent people in a very public industry (sports TV, politics, comedy TV, network news) struggle to do their jobs well against the backdrop of a fickle, uncaring public and power-hungry, amoral peers.  Their victories are few and far between, but always well-deserved because of their extreme integrity and dedication, and their almost unbelievable professional acumen is only matched by their comical ineptitude when it comes to personal relationships.  What’s frustrating is that he’s never been able to tell that story to a satisfying conclusion.  We’ve never gotten The Promised End.

Now, when The Newsroom airs its final 6 episodes (starting in just over a month – November 9th), Aaron Sorkin will have that opportunity, and we’ll get to see what it looks like when a great writer can leave it all on the field.  I don’t know about you guys, but I’m absolutely thrilled.

Why am I looking forward to The Newsroom being back?  Let me count the ways. 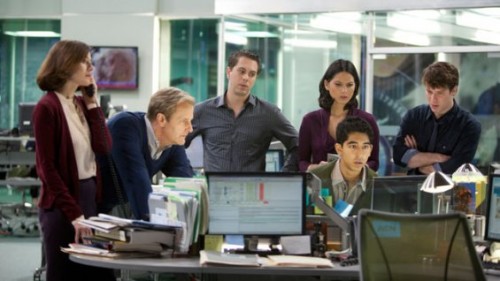 The cast.  Except for Jeff Daniels, they’re all at basically the “oh yeah, that girl from that thing” level of stardom, and they totally shouldn’t be.  Olivia Munn has incredible comic timing.  John Gallagher Jr. has enough boyish charisma to headline his own show. Alison Pill does “awkward, talented New York girl with relationship problems” better than the shows that are only about that, Dev Patel’s enthusiasm and verve steal several scenes, etc.  Even the bit players are beyond excellent.  Jane Fonda’s high-powered, extremely quotable CEO Leona Lansing is threatening and scary and cool.  Maggie’s roommate, and Jim’s romantic foil for the first season, Lisa, played by Kelen Coleman (whom I recognized only as the bridesmaid Dwight hooked up with in Jim and Pam’s wedding in The Office) is dry and witty and understated and letter-perfect.

I could spend more time raining down superlatives on the cast, but I don’t think anyone wants to read that.  Suffice to say, for what the show is trying to do, they could literally not have done better filling those roles.

The stakes.  So picture this: You’re Aaron Sorkin.  Take a moment to bask in the fact that you’re arguably one of the greatest screenwriters of the modern era.  You’ve had TV shows do well, and not so well, and one that’s considered to be a classic.  You’ve written classic movies like The American President, Malice, and A Few Good Men.  You’ve hit a couple award-winners out of the park recently with Moneyball and The Social Network.  But you’ve never seen a TV show through to the end.  Sure, none of your shows got a Firefly-style axe and just…ended, abruptly, but for none of them did you get to go out on your own terms.

All that is about to change.  The Newsroom is airing its final season – it was planned, it was set up to be this way.  It will only be 6 episodes long.  Season 2 set a standard of not just good episodes of TV, but an actual good, cohesive season of TV, and you have 6 episodes to figure out how to put a period on the end of that sentence, how to write a conclusion that isn’t forced, a conclusion that you choose.

The banter.  Yeah, I admit this isn’t the strongest reason, but I lap up Aaron Sorkin Banter ™ like a dog after a run on a hot day.  No one does it better, and it’s not particularly close.

The setup.  From that video, it seems a large arc of Season 3 will revolve around Neal helping a whistleblower, and the rest of the team trying to help him, protecting him.  I’ve always thought Aaron Sorkin’s wheelhouse for episodes was “one of our guys is in trouble,” a la the fantastic West Wing episode “Noel.”  It allows him to really flex his muscles when it comes to moving, powerful character moments.

Let’s see what a brilliant writer and a talented cast can do when they know it’s time to leave it all on the field.