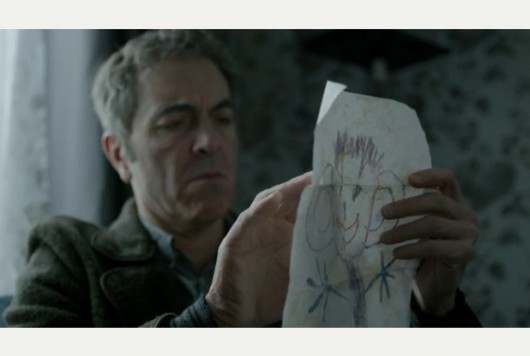 At the end of the last episode of The Missing we discover video footage of Oliver after he has been taken so the efforts of Julian and Tony seem to have paid off, but we are only half way through the series and it’s pretty much a given that we aren’t going to gain answers just yet. “Gone Fishing” does take great strides though, I figured that after the fast paced last episode the action would slow down a little bit to pad out the storyline as there were still five episodes to go but I was wrong. In the latest episode the scenes that we are seeing in the flashbacks and present day seem to becoming a bit more bridged, I thought the 2006 scenes were more to explore the characters rather than the investigation but I was wrong as the investigation is featured quite prominently. I’d like to now stick two fingers up to the people that were doubting the use of the flashbacks.

The glimpse of Oliver we saw in the closing of “The Meeting” isn’t the only lead that was contained in the video. It is revealed early on in the episode that the camera had recorded the next day as well and there is a cleaning van parked in front of the house that Oliver was kept. Julien reveals to Tony that the cleaning company belongs to a Romanian man that has links in the crime world and that the police have looked into him before. The Romanian man they are seeking also happens to be watching Ziane as he is searching the pool area again after being delegated the duty by Julien. It seems like The Missing is really pushing the Romanian mob/sex trafficking angle which just makes a part of me want to believe it isn’t true just because I love being surprised. If the theory is correct then I won’t be surprised, it has been structured very well since being introduced last week through the undercover officer that came foward and ending up being killed before being able to reveal any information. I love the flashbacks even more now, they were incredible in the past when exploring characters backgrounds, but now they are linking both the past and present investigation it is even better. We see the little clues in the past that lead nowhere, but developing in present day right before our eyes and it gives me a sense of hope that there are answers out there, Tony will find closure.

During the opening of the episode we are introduced to a teacher, Rini (Anamaria Marinca), who seemingly has no link to the investigation but instantly you could tell she’s important. I initially thought that Vincent Bourg would be a smaller character that had a flimsy link to the investigation and wouldn’t play a major role in the present events and I’m being proved wrong, so the presence of Rini isn’t just to fill up air time. Through flashbacks the audience learns that Rini is a former addict and the girlfriend of the murdered officer, this episode shows Julien trying to get her clean and retrieve information from her. I’ve loved every moment of  The Missing so far so this seemed out of place, would an experienced officer like Julien really waste precious time on a junkie? He wasn’t even certain that she had information and the early days of an abduction case are the most pivotal so it felt out of character. Although the scenes between the two were like a foreign body in the episode it was nice to get an insight into Juliens personal life, as this is what he has to go through with his daughter. Even the bad parts of The Missing are quite good. In present day we see that Rini has sorted her life out and feels like she owes Julien, he helped her get clean and sort her life out. Her deceased boyfriend isn’t the only link she has to the Romanian gangsters, her brother is involved with them as well and she’s willing to go back to her old life to help Tony find Oliver.

Present day Tony takes more of a back seat this episode but that doesn’t mean his character has been sidelined, his actions in 2006 are explored pretty thoroughly. In the last episode Tony broke into Vincent’s home and ended up confronting Bourg who would only respond to him in French. Early in “Gone Fishing” Tony figures out that he was repeating “I will not say anything” which convinces him that Vincent is hiding something (which he is) so Tony runs to the only person he feels is on his side, the shady Ian Garrett. Garrett attempts to steer Tony away from Vincent (and himself) by offering a friendly shoulder and revealing that he has also lost his daughter which is why he is showing so much compassion towards the Hughes. I’ve watched Tony for four hours now and I’ve seen the state he has been in different periods throughout the investigation and his emotion is so raw that it tugs on my heartstrings more than fiction should but I didn’t get a shred of that when Ian revealed his story. Obviously Tony didn’t, Garrett clearly told Tony the story to put him at ease around Garrett and make him more relatable but now Tony believes that Ian is in league with Vincent, and Tony made Emily believe it to.

This episode sees more of Vincent and the ordeal he is going through with the hormone injections. I describe it as ordeal but I really shouldn’t, he seems like a much happier person, he isn’t tortured by his impure thoughts anymore and is enjoying life. He has even gotten a new found confidence which leads him to attempt to confront Ian Garrett in present day. When I realised that Vincent was travelling to France for Ian I got a little too excited, we hadn’t witnessed Ian in present day so I was eager to see where he was. Did he end up behind bars? Or is he still living the high life? Neither. When Vincent arrive at Garrett’s office he is quickly informed that Ian disappeared eight years ago and has legally been declared dead. At that moment I get a flashback to a few episodes ago when Malik informs Emily that he knows what she and Tony did and he will prove it. It seems pretty likely at this point that the secret is the disappearance/murder of Ian Garrett, especially seeing how shaken both Tony and Emily were and the police seemed to be running in circles (or just rehabilitating drug addicts) and I firmly believe that desperation could drive someone to do something like this. We already know that Tony has violent tendancies and he almost killed Vincent before so they are still around and in all honesty what would you do in Tony’s situation? I don’t think even I could rule out hurting my sons abductor. This turn of events has convinced me even more that although Garrett is shady and probably involved in a mess of crime he didn’t take Ollie. Would Tony be working so hard to find out the truth if it was Ian who is now dead?

This Missing has given us a few theories to ponder over the course of four episodes including the Romanian crime syndicate and Ian/Bourgh but I’d like to put another one forward. My theory doesn’t really have any firm evidence to back it up other than my suspicious mind but I’d like to put the spotlight on Mark, Emily’s fiancé. We’ve explored most of the characters over the four episodes but Mark, but he seems to be more at the forefront in “Gone Fishing”. It was Malik who bought him to my attention when he belittles Mark and calls him the spare part of the investigation, and I always accept the opposite of what is true, because of that comment I believe that Mark is much more involved than anyone realises and perhaps one of the bad guys. Mark solidifies my theory even more later on in the episode when he informs Emily that his career has stalled because he is in a relationship with her, but he doesn’t care because he loves her and even though Oliver’s dispearance was one of the worst days of her life it was the best of his. It sent a bit of a chill down my spine, maybe he isn’t part of the investigation but I think he was at least involved in some sort of a cover up due to his feelings for Emily as he benefitted from Oliver being gone.

The Missing started out as a show about finding Oliver but it has evolved into something much more. With every episode we are introduced to even more compelling characters and enticing sub plots soon follow them into the fold. Theories are fluttering around my head when watching the episodes and with any other show I’d be worried that it wouldn’t deliver but I don’t feel that way about The Missing. I can already see that it is structured well and I’m sure that the writers have an end in sight that will appease us all so for the next four weeks I’ll sit back and watch the mysteries unfold.