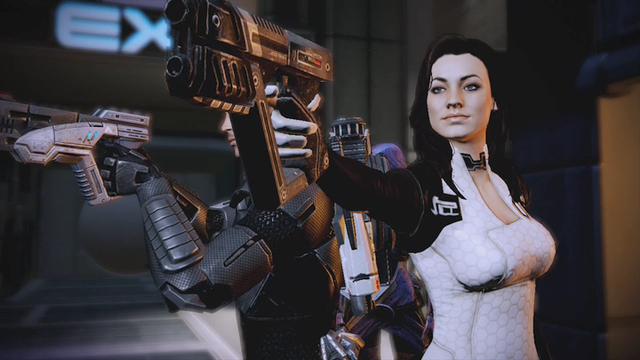 Alright folks, it’s time for another Mass Effect 2 journal update, as I believe I’ve crammed in enough playing time to put together another installment.

Last time, I was about seven hours in, getting used to the new combat system and recruiting my team to go fight some bitch ass Collectors and Reapers. Now? I’m just about thirty hours in (I never skip through ANY dialogue), and I’ve just now finished recruiting my team, which seems pretty unbelievable. I’m now about to head into the dreaded Omega relay, and honestly I can’t quite figure out if I’m at the end of the game or not.

I kind of find it hard to believe that the entirety of the game consists of assembling nine, count ‘em NINE team members, doing their various loyalty missions, and then heading off to fight the big boss. There have only been two or three real “story” mission pertaining to the main plotline, which doesn’t seem like very many, although I AM about thirty hours into the game, so I would expect the end to be nigh.

It’s not that I haven’t enjoyed my playing time so far. Each of the recruitment and subsequent loyalty missions for each team member have been a lot of fun, and in the keeping of the emotional tradition of the game, it really is a great bonding experience for you and your various team members. 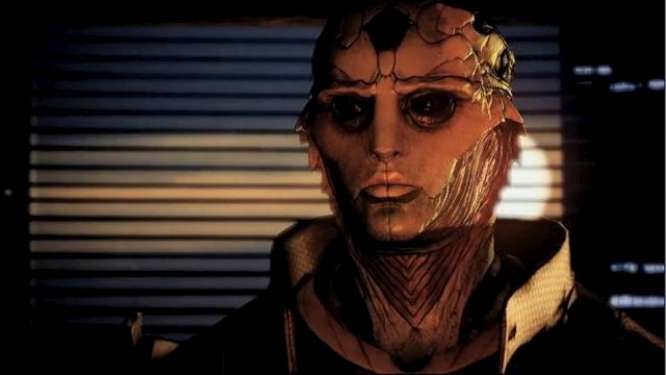 However, as much as I’ve liked getting to know everyone, I really hope that my team ends up having some greater significance to the plot at the end of the game. Right now, I’m predicting that there will be some rather hard level, I’ll pick my two favorite team members to go through it, and I’ll end up personally killing 90% of the enemies we encounter along with the final boss. Having a nine member team is frustrating when you can only utilize two of them at a time, and there’s so much overlap between them, some will be permanently shelved for the duration of the game. I mean, do I really need five different biotics to choose from? You ultimately end up picking teammates based on the funny things you think they’ll say during the mission, not for any of their combat skills which will always pale in comparison to your own.

I’m also a little disconcerted with the game’s lack of side-missions thus far outside of the main recruiting and loyalty questline. I’ve done my fair share of running around Illium and the Citadel for a series of non-combat missions, but I remember a lot more quests from the first game that had people sending me out to distant planets to destroy a base or kill someone. I’ve only had two or three of those so far, and they’ve just been Alliance business. 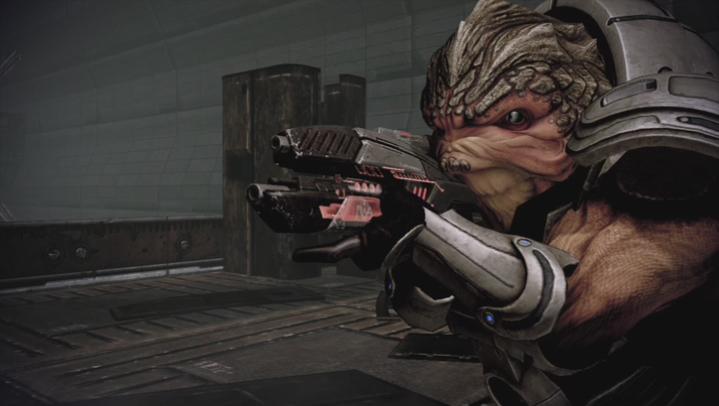 Meet Grunt, the most genetically perfect Krogan who has ever lived, yet he somehow can’t figure out how to walk up stairs sometimes.

However, it’s entirely possible that I just haven’t explored enough of the galaxy yet, and these missions are out there. But in all my random space exploration so far, I’ve found about 99 planets that are full of nothing but minerals and static and only one that actually contained a hidden mission. Some systems are simply a collection of mineral planets with nothing else in them! I’d say I have about 80% of the game’s upgrades so far, and I have more elements amassed than the goddamn periodic table, despite only mining about 25% of the planets out there. This is a good thing though, because I’ll be damned if I can spend another second mining as it’s the kind of activity that has your friends walk in and say, “This is the dumbest shit I’ve ever seen in a game,” and at the time, it’s hard to form a coherent argument against that as you spend the next twenty minute shooting probes at a rock while watching wavy lines move up and down.

Needless to say, I haven’t come around to the game’s decision to eliminate the Mako and planet exploration for the new game. Planets used to be more than just balls and squiggly lines on a mineral finding chart. Sure, the environments looked the same, but you could drive around, jump in the air, fight local geth and wildlife, and find bases, artifacts and other mysteries in addition to missions themselves. Here? In Bioware’s effort to eliminate that boring driving part of off-world exploration, they’ve replaced it with no exploration at all, which is far more dull if you ask me.

But before I go overboard on criticism (I only hate because I love), I must say I’m having a blast with the game. I’m annoyed that I only get to use a fraction of my crew at a time, but getting to know them has been a great experience, and flirting with Miranda, Kelly and Tali has been quite amusing. I hated Miranda at first, but started to sympathize with her after her loyalty mission, and I’m impressed with out the game has been able to change my opinion of her. And Tali likes me too? Nice! I always wondered why she wasn’t a love interest in the first game, and I always had a little virtual crush there. Shit, did I just say that out loud? I still have yet to figure out if that’s a viable romance option here, or if it’s just a few select phrases that make it seem that way. And how exactly do we get around that suit? 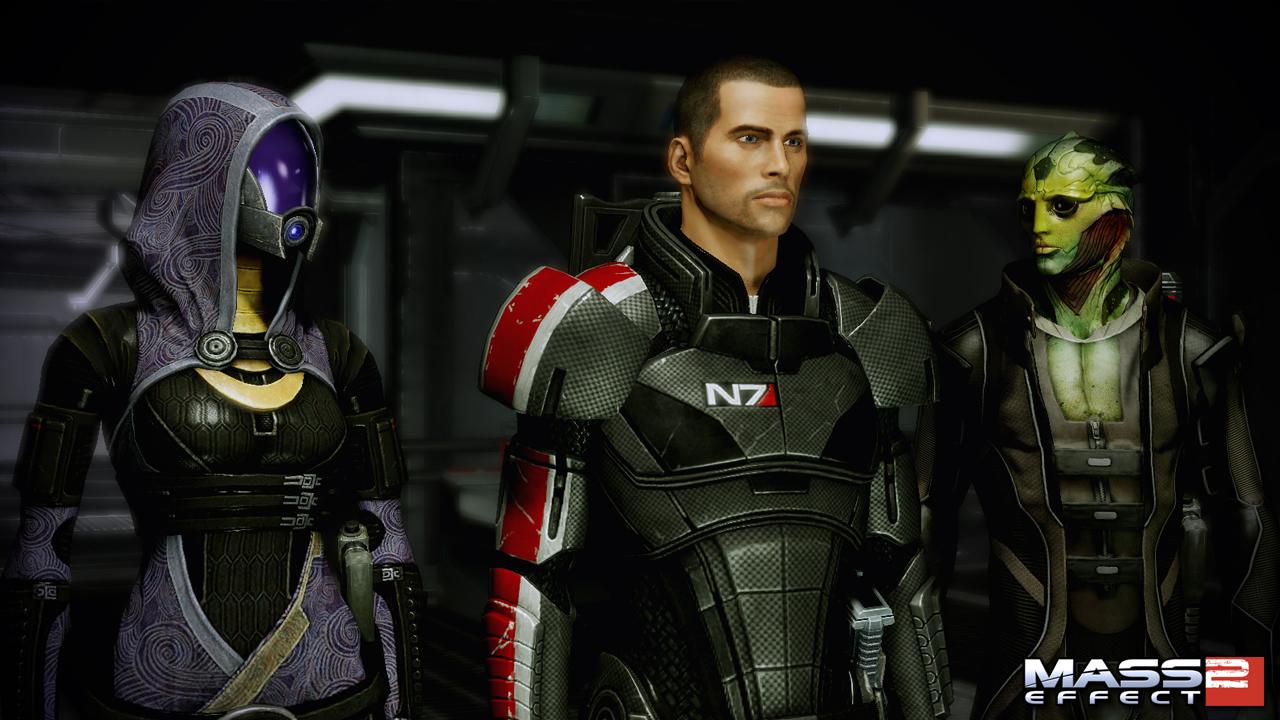 “Hey baby, wanna let me steam up your visor?”

But what concerns me most about the game at my current point in time is that I’m wondering if the game is going to end. And what I mean by that is, will it have a hard ending the way the original Mass Effect did, where once I head into that Omega relay, I can’t explore any more systems or do any more side missions, and will have to reload a previous save to do so? My experiences with the last game have me creating new saves every other second just in case I do something irreversible that won’t let me continue playing. And when the loading screen is telling me that I can do a “second playthrough to unlock powerful bonuses” that’s an even bigger mindf*ck. If I play through again, which decisions will carry over to Mass Effect 3 for this character? My original ones, or these new decisions in the second go-round, which I would assume would be the case. If so, the game is missing the point as to WHY people want to do a second playthrough. I’m already clamoring to replay the game, yes, but with my Renegade girl Shepard from the previous game, making all the opposite decisions this time around. But as much as I do enjoy playing the game, I don’t want to have to beat it FOUR times to unlock all the bonuses for each save file.

I don’t want any of you to ruin how this all works out for me, so I won’t ask you to tell me what happens, and I’ll rely on my previous saves if I need them. In my mind, ALL Bioware had to do here was have us destroy whatever threat we’re facing, but keep the rest of the galaxy open afterward for exploration until Mass Effect 3 or DLC hits. No second playthroughs in the same file, no hard endings. Just let us beat the game once with each of our characters, and explore the shit out of space once we’re done. I guess, I’ll see if they heeded my advice soon enough. 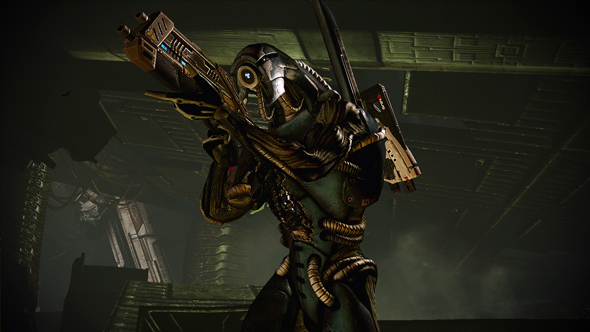 The Geth are back in ways you aren’t expecting. 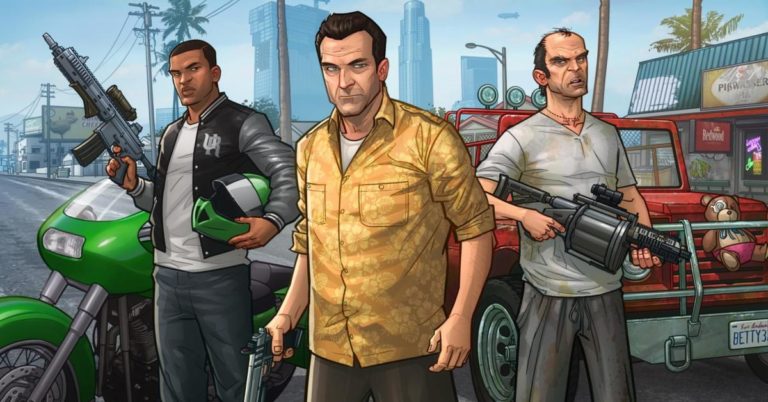 comes with plenty of cheats to make the experience more entertaining for the player. However, such individuals should know that there are various methods by which cheats can be entered into the game. For instance,…

(click to enlarge) It may be a bit rainbow-y for my tastes, but there’s no denying that this is a pretty awesome image that encompasses a TON of the best games out there. It’s by… 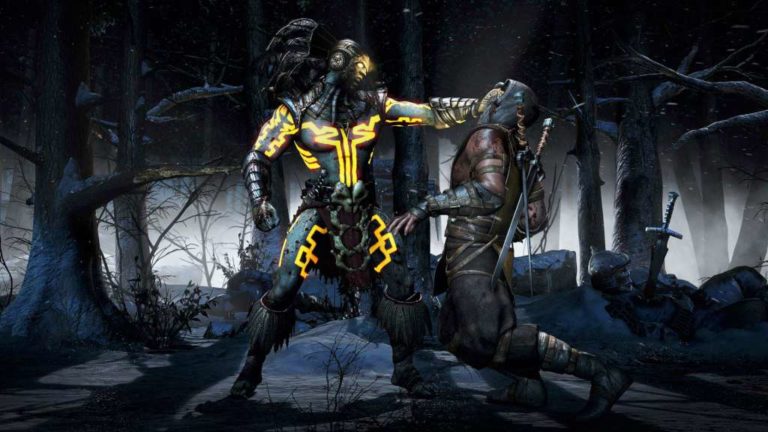 Mortal Kombat was the ultimate 90s video game. It had a great story and the best characters, of course. The original game spawned a couple of films produced that decade and plenty of fighting games—a…

[via reddit] So I know a lot of die hard PS3 owners read the site here, fans that are now having to change every password they have on the internet and cancel their credit cards…

Alright, after that epic 2,000 word review of Deus Ex: Human Revolution, I figured it was time for a little breather. I would say an augmented dog counts as a bit of a change of…

Soul Calibur is a series that’s known for its colorful cast of character, including a number of lovely young virtual ladies. They have distinctive looks that are cosplayed regularly, but the costume choices usually center…