When it comes to talking about shows with people in real life, there’s one theme that sticks out: what you like, what you don’t.  Since Netflix and Hulu have come to dominate the market (and definitely my generation), we talk about shows like we talk about bands – who have you seen lately?  Who’s good?  Who’s overrated?  It’s much more of a “sample and select” culture than it was 15 years ago, when pretty much everyone could talk about what happened on the last episode of Friends, or 10 years ago when people couldn’t wait to talk about the last Lost episode.

We don’t focus on plot so much; we focus on preference.  And thus, a common awkward experience of the current moment in time is biting your tongue when a beloved show gets brought up, dissected, and dissed by your friends.  So what, right?  Someone you like doesn’t like a show that you like.  Hardly the end of the world.  But for certain shows, it seems to be.

What makes you want to defend some shows and not others?  Remember, I’m talking about shows that are good already, that you like already.  But there’s a huge difference between, say, The League and New Girl.  Both solid shows, but when someone bashes The League, I barely feel compelled to raise an objection, and then if someone doesn’t care for New Girl, I’m right there with six reasons it’s the smartest broad-based, mass appeal modern comedy and  my “Jake Johnson is an underrated gem” aria.

Why?  What’s the key factor of a show that makes you feel like it needs defending?  Let’s break out the numbers and see if we can work this thing out.

Sample conversation: “I gave [X show] a try, I really did.  I watched like 4 or 5 episodes, but I just couldn’t get into it.  The [plot point A] was too [adjective B], and [character C] was just so annoying.”

The ranking system: (your reply)

4 – “Are you sure you were watching the right show?”

8 – “You can’t sit there and tell you me don’t like X when you watch Y; you’re a better human being than that.”

Here are 6 contemporary shows and where they rank on the scale.  These are all good-to-excellent shows that I personally love.  So why don’t I feel the need to defend… 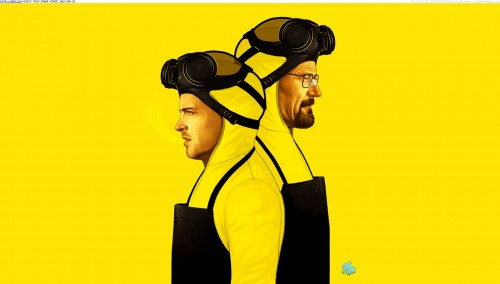 Oh yeah, did I mention I’m a fan of decimals?  Whatever, it’s my arbitrary rating system, I’ll do what I want.

So yeah, not feeling much need to defend it.  Mainly because it’s so good.  I mean, it’s so good it freaks me out.  It’s so good I’ve felt zero contrarian itch to not like it because it’s incredibly popular.  It’s just so obviously good that when I hear a friend express disinterest or negativity about it, which doesn’t happen often, I don’t need to jump in.  They’re either trying to be ‘anti-popular’ or they’re one of those people for whom “television” means “Wheel of Fortune and NFL games, and the Olympics, sometimes.”  That’s kind of an alien concept to me, and if they’re that far off my wavelength, we’re probably not getting along great anyway.

I’ll let this one pass all the time.  And I’m a huge fan of a show; watched every episode (except the last half of Season 5) at least 2 or 3 times each, watched it every week, talked about it with friends… so “the factor” can’t be passion.  Let’s give something else a try.  Next!

Archer is a show that I can totally understand why a lot of people don’t like it.  At the same time, I feel like if more people gave it a try, they’d be surprised by it.  There’s a certain subgroup that was going to love it just based on its style of humor and ties to Arrested Development (by the way, AD isn’t on this list, since I’m doing recent shows only, but if it was, it would be a 10).  I’m not talking about those folks.  I’m talking about folks who just don’t go outside of super-mainstream TV.  Your Modern Family s.  Your Everybody Loves Raymonds.

If you’re used to TV being bland, generically funny, and predictable, Archer will shake you up, but it’s so fun and mixes in so many different things and has so many opportunities to hook you.  It’s the Girl Talk of TV.  Even if you hate rap, there’s something in that musical blender that’ll get you interested.

So while I’m not going to go out of my way to defend it to people, I might look for the opportunity to show them a favorite episode, carefully tailored to what I know about them and what they like.  But I won’t obsess about it.  You can lead a horse to water… 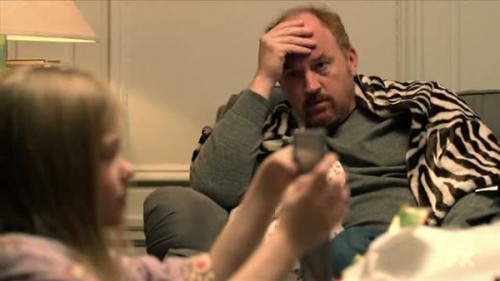 I have a pet peeve, and it’s people not giving their undivided attention to a story.  It could be a podcast, book on tape, movie, TV show, whatever – but if it’s being projected into a room or car and there’s an understanding that we’re doing that thing (like if someone says, “let’s watch a movie.”), doing anything other than paying attention to that thing is a crime worthy of death, in my mind.  Since I realize that the world doesn’t conform to my mind, I usually put up with it.  But I suffer in silence.  It drives me absolutely up the wall when I’m watching a TV show with a group and someone starts talking (“hey, I know that guy.  What else has he been in?”).

So.  Louie is a show that you have to pay attention to.  Not because it’s so rapid-fire that you’ll miss something, but because it needs to gradually draw you in, like a tide coming up a beach.  Louie is like watching a pitcher – not the best pitcher in the world, maybe a guy who’s kind of an underdog, a #3 starter who’s hung around in the majors for a decade – pitch a no-hitter.  It takes time.  It’s gradual.  But it’s magical.  It’s magical if you let it be magical.  You have to give it enough space to do that thing.  It meanders.  Louie CK isn’t afraid to not let you know exactly where an episode is going.  That’s why you’ve got to pay attention to the whole thing.

It’s come up several times with friends who are lukewarm on this show.  They don’t hate it, but they don’t get what all the fuss is about.  It pushes my buttons enough to try to articulate the above two paragraphs, but that kind of conversation takes a kind of engagement that’s usually not happening in a social setting.  So while I do want to defend this show, it’s not easy. 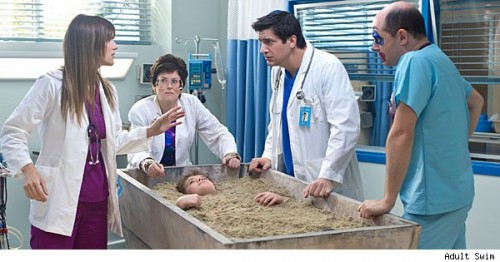 Let’s stick with the baseball analogy for a moment.  If Louie is like a pitcher doing something incredible over the course of a long game, Children’s Hospital is like a triple play happening right in front of you: you’ll miss it if you blink.  Pay attention to the thing that is happening in front of you.  Give it your undivided attention.  Because when a show has only 10 minutes to pack as much absolute insanity into an episode as humanly possible, you can’t afford not to.

Look, there are another 1,000 words to write about this show – like, compare and contrast to Community, and why the latter is an internet darling and Children’s Hospital is, well, not.  Or the masterful show within a show that is Newsreaders and what it says about a show with zero plot being able to commit to a second-level metafictional universe with that level of detail and continuity.

There’s stuff to talk about.  But in the end, all I can really say is that if you can’t laugh at Lake Bell saying the words “horse AIDS”, I don’t know what to do for you. 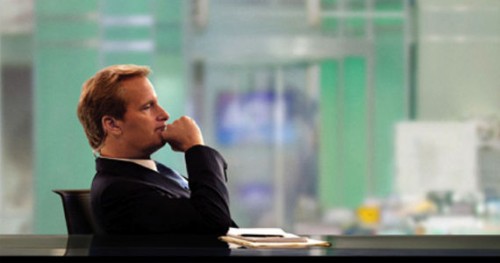 Because despite all the fashionable Aaron Sorkin hate, this is currently the best show on television.  I’ve pretty much said my piece here:

The Newsroom, Optimism, and Second Chances

This is one I’ll really defend to the death.  It needs defense.  No show is perfect.  But damn it if it’s not trying.

by Brian Hadsell To hear everybody tell it a year ago, Marvel’s Agents of S.H.I.E.L.D. was a terrible show.  Clark Gregg – a balding, middle-aged bit-player from Marvel’s Phase 1 – was too old to…

(click to enlarge) I may have grown up in a time after I could appreciate Married with Children, which is possibly why I’m just finding out the show is a huge international phenomenon. It’s common…

OK, so if there’s one company that’s dominated the nerd universe for God knows how long, it’s Lego.  But in the last decade they’ve managed to pick up an even larger percentage of die hard…

And back across the island we go. I’m torn between what’s the more interesting group on Lost these days, the Jacob-influenced temple crew or the Not-Locke dominated Linus/Sawyer brigade. But both teams seem to be…

A beautiful, yet somehow tragic eleventh Doctor piece from one of our favorite artists, James Hance. I’ll let this one speak for itself.